Today, Newsweek magazine released this week’s cover via Twitter: a hopey, changey Barack Obama staring into the future, his head swirled with a rainbow halo. The bold font title: “THE FIRST GAY PRESIDENT.” And the cover story is written by none other than Andrew Sullivan, famed Trig Palin truther (he believes the bizarre conspiracy theory that Trig Palin is actually Bristol Palin’s son rather than Sarah Palin’s). The last time we saw Sullivan writing a cover story for Newsweek, he was asking “Why Are Obama’s Critics So Dumb?” 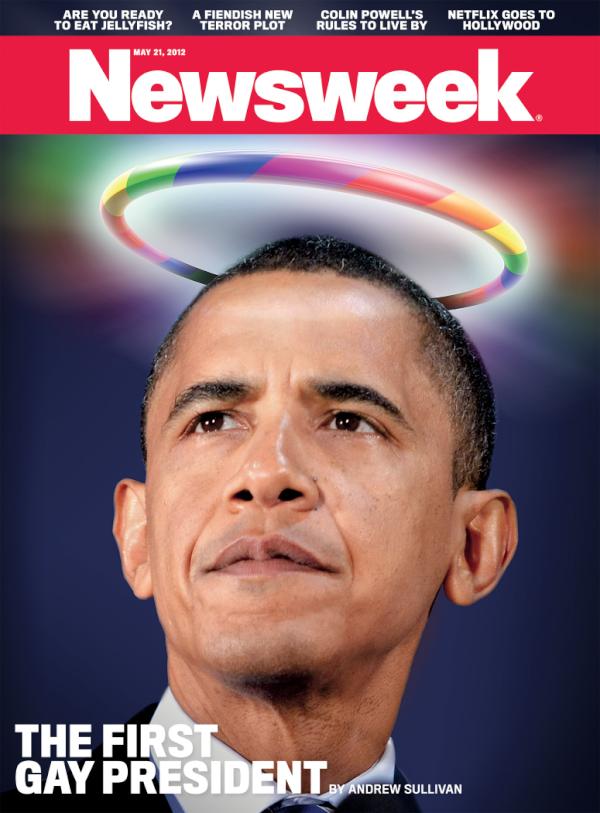 The Newsweek cover is obviously a take-off on the old line about Bill Clinton being the “first black president,” but it’s also an unintended backhanded in-kind contribution to the Romney campaign. In the liberal press’ desperate gushing over Obama’s same-sex marriage stance, they’ve alienated more than half the country – every state that has ever held a referendum on same-sex marriage has voted it down. The most polarizing president in history by every measurable statistic has polarized the country yet again – yet Newsweek insists on portraying Obama as a holy figure for embracing an anti-Biblical position, thereby also alienating every religious person in the country.

The cover is deeply arrogant, of course. We have no idea what a full-scale embrace of same-sex marriage would mean for society; portraying Obama as a halo-ridden angel for overturning thousands of years of marital precedent is simply absurd. It’s a radical change, by definition, with Obama and his allies tampering with the very fabric of our society – but by Newsweek‘s lights, it’s obviously a net plus. Obama thinks so too, which is why he termed his embrace of same-sex marriage an “evolution,” suggesting that his opponents were unevolved.

No wonder Tina Brown’s Newsweek has become a punch line. Its political coverage is a joke.