James Hohmann of the Washington Post deleted a post Thursday afternoon appearing to link Brett Kavanaugh’s weightlifting exercise to an allegation leveled by Christine Blasey Ford that he “pinned” her to a bed in the early 1980s.

Hohmann, the Post’s national political correspondent in charge of the paper’s “Daily 202” news aggregation, wrote: “Brett Kavanaugh notes that the summer that the sexual assault allegedly took place, when Christine Ford says he pinned her down on a bed, he had spent a lot of time lighting weights and doing strength training.” 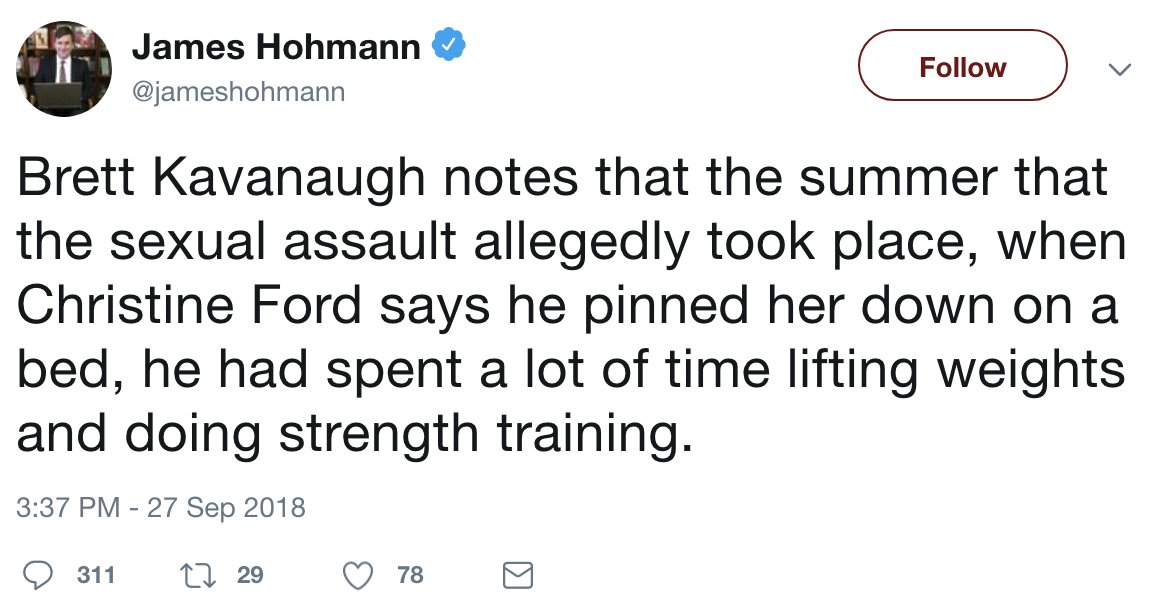 In his prepared statement delivered before the Senate Judiciary Committee, Kavanaugh cited calendars from 1981 and 1982 where he recorded his activities, including weightlifting sessions.

Kavanaugh testified that his calendars supported his recollection of never attending a party with Blasey Ford:

When I was in town, I spent much of my time working, working out, lifting weights, playing basketball, or hanging out and having some beers with friends, as we talked about life and football and school and girls.

In the summer of 1981, I had worked construction. In the summer of 1982, my job was cutting lawns. I had my own business of sorts. You see some specifics about the lawn cutting listed on the August calendar page, when I had to time the last lawn cuttings of the summer of various lawns before football training camp. I played in a lot of summer league basketball games for the Georgetown Prep team at night at Blair High School in Silver Spring. Many nights I worked out with other guys at Tobin’s house, he was the great quarterback on our football team, and his dad ran workouts, or lifted weights at Georgetown Prep in preparation for the football season.

After deleting the tweet, Hohmann denied that he meant to insinuate Kavanagh’s weightlifting gave him the strengthen to allegedly pin down his accuser.

One of my earlier tweets was interpreted in a way that was not intended so I deleted it.

According to Ford, Kavanaugh and his friend Mike Judge forced her into a bedroom and proceeded to grope her and try to undress her. The incident, which all of Ford’s named witnesses deny any recollection of, is said to have occurred at a house party in Maryland around 1982.