The Washington Post’s Amber Phillips was caught red-handed spreading fake news about the cost of isopropyl alcohol, a substance that can be used to efficiently remove the coronavirus from surfaces.

On Thursday, the Trump administration and its medical experts revealed that isopropyl alcohol is quite effective in cleaning surfaces suspected of being infected with the coronavirus. Within a minute or so, the virus dies.

To any sane person interested in saving lives, offering a little hope, reducing infections, and informing Americans of this important find, this is good news, the kind of news a morally responsible and humane media would want to share with the public.

Unfortunately, as we have learned since the CNN Race Riots of 2014, we do not have a morally responsible or humane media, rather we have a sociopathic media willing to destroy countless lives in pursuit of their far-left political agenda.

And so, rather than inform the public of a fairly common household chemical that might save your family’s lives, the hideous Amber Phillips chose to annihilate this glimmer of hope and “own” Trump by spreading the wildly fake news that isopropyl alcohol is insanely expensive — a whopping $2,375!!

In other words, Look at the horrible Orange Bad Man touting something no one can afford — something YOU cannot afford, so don’t even bother buying it to save your family!

Here’s a screenshot of her tweet with the two most important items highlighted in red: 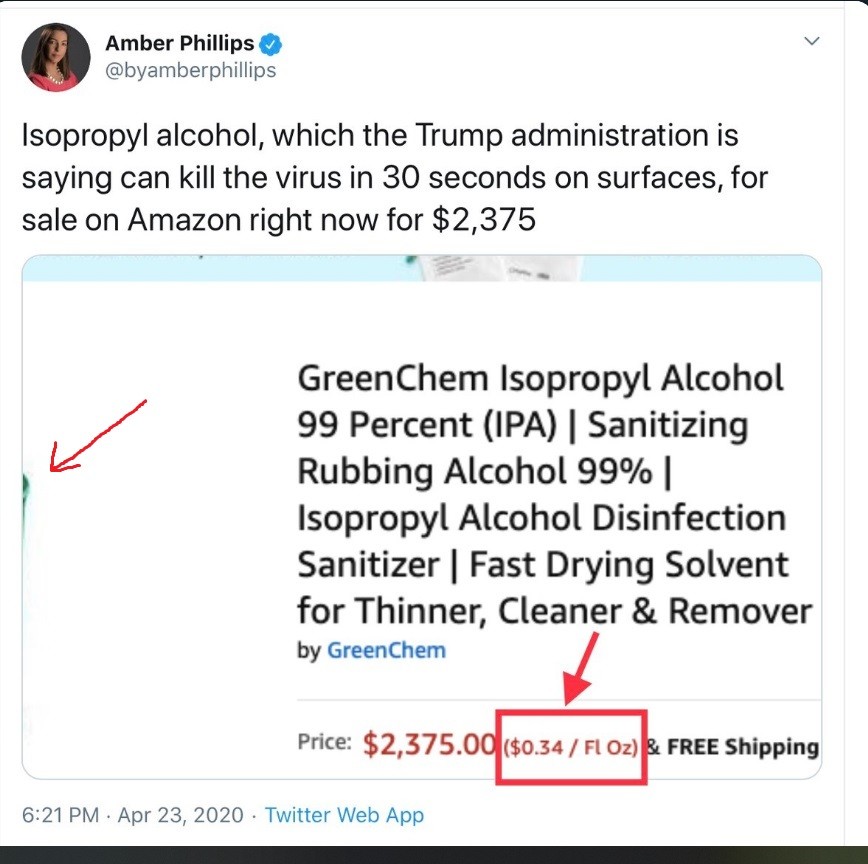 At the bottom, highlighted in red, and something Phillips hopes you don’t notice, is the per fluid ounce price of just $0.34. I mean, wow, at that price per ounce, how can this wonderful household item cost $2,375???

The more important arrow, however, is off to the left… Deliberately cropped out in Phillips’ tweet — what this Washington Post “reporter” did not want you to see, what is intentionally hid from her readers as a means to intentionally mislead them, is a photo of a 55-gallon drum.

I know that sounds incredible, impossible… As awful and evil as the media are, no way would someone who identifies as a journalist go that far to spread a lie… Come on! That’s ridiculous.

Nope. That’s exactly what she did:

I thought you were being dumb but you're clearly just lying. You cropped out the picture of the 55 gallon drum, which means you knew it was that much. pic.twitter.com/DFLmJbbJ4z

And now, this hideous woman has locked her Twitter account, and because the Washington Post has no ethical standards or scruples whatsoever, she still has a job.

And if the name Amber Phillips sounds familiar, that’s because she’s the same liar who claimed — even after the Post’s own left-wing fact checker debunked the claim — that Trump called the coronavirus a hoax.

The media are evil, and there is no lie they won’t tell.

If a Washington Post reporter is willing to brazenly tell a shameless lie about something like this, imagine the lies the Post is spreading about things that actually matter, about big things.