President Donald Trump and Democrat presidential candidate Joe Biden are in a dead heat as they vie for the one electoral vote in Maine’s Second Congressional District, according to a poll released Thursday.

While Biden maintains a double-digit lead statewide, the poll found his lead slimmed down to within the margin of error, 49 percent to 46 percent, in the state’s rural Second District, placing the candidates in a statistical tie there.

The poll was conducted by SurveyUSA and commissioned by FairVote October 23–27, notably overlapping with several campaign appearances, including from Trump himself in a surprise visit Sunday; Biden’s wife, Jill Biden, Tuesday; Trump surrogates Corey Lewandowski and South Dakota Gov. Kristi Noem, among others, Wednesday; and Donald Trump Jr. Thursday. 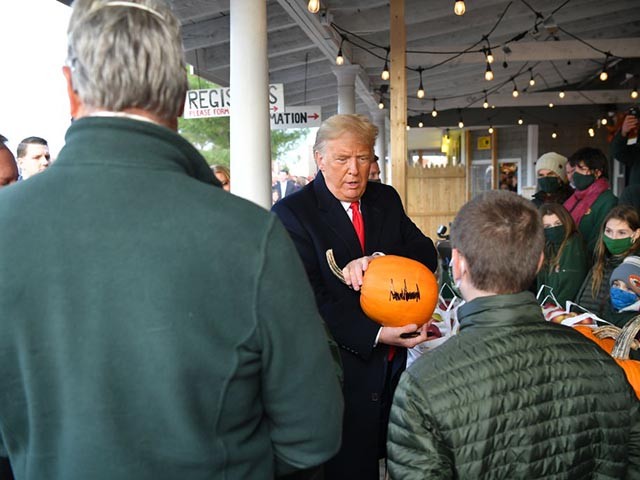 President Trump signs pumpkins as he meets with people at Treworgy Orchards during a surprise campaign stop in Levant, Maine, on October 25, 2020. (MANDEL NGAN/AFP via Getty Images)

The poll tested Maine’s ranked-choice voting system, which requires candidates win with at least a 50 percent majority, but found it had minimal impact on the Second District’s presidential race. While it bumped Biden up to the needed majority of 50 percent, the increase was minor at just one percent.

Trump trails Biden by 13 points, 40 percent to 53 percent, in the state as a whole, a promising lead for Biden that would earn the former vice president three of the state’s four electoral votes should the poll translate to victory.

The more conservative Second District, however, has consistently placed Biden just a few points ahead of Trump in polls on average. Trump outperformed polling predictions and saw a ten-point victory in the district in 2016. During that election, RealClearPolitics’ polling average had Trump at a 0.5 percent advantage; FiveThirtyEight had predicted Trump would lose by 1.9 percent. The swing district remains a heated contest since it could in certain instances become the election’s deciding 270th electoral vote as mapped out by Breitbart News’s Matthew Boyle.

Statewide, the poll found Republican Sen. Susan Collins and Democrat challenger Sara Gideon within one point of each other as Collins fights for a fifth term in what has been her closest Senate race yet.

Gideon, Maine’s House speaker since 2016, has held a stagnant, slim lead over Collins for the past few months, which some analysts have identified as a concerning lack of momentum for Gideon; this poll falls in line as it pits Gideon one point ahead of Collins, 46 percent to 45 percent.

While the Second District is a battleground in the presidential race, Collins carries an unsurprising lead of 11 points in that district. Gideon is more favorable in the smaller, densely populated First District with a 13-point lead.

The ranked-choice voting method gave Gideon slightly more of an edge in the Senate race, with 51 percent to Collins’ 49 percent. FairVote President Rob Richie said of the ranked-choice findings, “This poll shows that in Maine, every vote will count. … No voter will lose their voice in the final decision simply due to wanting to support a third party or independent candidate.”