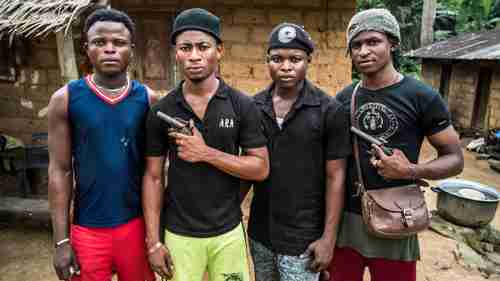 Cameroon’s Francophone (French-speaking) President Paul Biya is the favorite to win re-election as president on Sunday. A poll reveals that none of the nine opposition candidates would be able to defeat Biya, even though the economy is tanking and most voters are opposed to Biya’s war and atrocities on the Anglophone (English-speaking) population in the Southern Cameroons region of the county.

The atrocities began in November 2016, when the Francophone (French-speaking) Cameroon government security forces began beating and killing peaceful anti-government demonstrators in the South Cameroons, the Anglophone (English-speaking) regions of Cameroon. The demonstrators were protesting systematic bias, discrimination, and marginalization towards Anglophones by the Francophone government. For example, schoolteachers in the Anglophone regions were forbidden from teaching any courses in English, court cases had to be held in French, and it was against the law to provide English translations of the laws.

The level of atrocities ticked up considerably in October 2017, when the Anglophone separatists demanded independence for the Southern Cameroons, calling it Ambazonia. A video emerged purporting to show Francophone soldiers forcing Anglophone teenage girls to crawl through mud in front of the Cameroon Protestant College, as the men jeer at the girls and refer to them as Ambazonians.

The Anglophones began forming their own army called the Ambazonia Defense Forces (ADF), with about 1,500 people spread around 20 camps in the Anglophone regions. In most cases, the people are farmers who had been forced to leave their villages, armed with hunting rifles made in Nigeria. In September of last year, activist separatists began using small bombs to target local security forces.

In December of last year, Biya declared full scale war on the separatists, with this announcement:

I learned with emotion of the murder of four Cameroonian soldiers and two policemen in the south-west of our country. I think that things are now clear to everyone. Cameroon is the victim of repeated attacks by a band of terrorists claiming to be part of a secessionist movement.

Faced with these attacks of aggression, I assure the Cameroonian people that all measures are being taken to end these criminals’ ability to do harm.

Human Rights Watch issued a report in July saying that the violence in Cameroon has reached a crisis level, and could still get much worse. The report Abuses by Government and Separatist Groups in Cameroon’s Anglophone Regions”:

According to claims by the separatists, within the last month, the Francophone army has been burning down villages and killing anyone from 13 years to 50 years old.

Cameroon’s last generational crisis war was the “UPC Revolt,” 1956-1960, which was a bloody civil war by communists attacking the French government in the Cameroun colony. It has now been exactly 58 years since the ending climax of the UPC Revolt. Generational Dynamics research shows that 58 years is the point where the generations of survivors of the previous crisis war have retired or died in sufficient number that they no longer hold enough power to stop the excesses of the younger generations. Cameroon is spiraling into a full-scale generational crisis war, and there is nothing to stop it. Journal du Cameroun and Africa News and Human Rights Watch and Vice News

Paul Biya has been campaigning in Francophone Cameroon for a seventh term in office, which he has held since 1982.

Cameroon’s Francophone government has declared a 48-hour curfew in the Southern Cameroons region, occupied by the Anglophones. October 1 is the first anniversary of the day when tens of thousands of demonstrators took to the streets, triggering an army massacre that killed hundreds of people.

Separatist activists have vowed to block the presidential election in any of the Anglophone regions. On Thursday, separatist militants raided a prison and freed about 100 inmates, claiming that the prisoners were innocent people that the army arrested at random on the street.

Separatists have set up checkpoints blocking traffic on major roads, helping to paralyze activity across the region. According to Cho Ayaba, a separatist leader, “There will be no election in Ambazonia. We want to make sure there is no movement from Cameroon into Ambazonia, including election materials.” The Nation (Kenya) and AFP and Reuters