Unspecified “bandits” in Muslim-majority Zamfara state, Nigeria, attacked as many as 15 villages on Christmas Day, killing at least seven and abducting dozens.

Nigeria’s Premium Times confirmed the attack on Monday. As many Christian communities in northern Nigeria are extremely remote, it often takes days for the news of such attacks to reach local journalists. The attacks occurred after a “Fulani association” sent a letter to the Christian minority in northern Nigeria in late November demanding that all churches in Zamfara shut down within three years or face violent attacks. The letter listed some churches to be attacked between late November and Christmas regardless of their operating status.

Ethnic Fulani jihadists have threatened the Christian minority in the north of the country for years, engaging in widespread massacres in an attempt to drive Christianity out of the region entirely. Experts often state that the slaughter of Christians in the region began as a “conflict” between the majority-Muslim Fulanis attempting to use the land for herding and Christians trying to farm, but the overwhelming majority of attacks in the “conflict” are against Christians, and the disagreement manifests itself as Fulanis forcing their animals onto Christian farmland, destroying their crops.

On Saturday – Christmas Day – the Premium Times reported that “armed persons,” without further identifying them, descended on 15 different communities in the greater area surrounding the regional Zamfara capital of Gusau, abducting at least 33 women. The spate of attacks began on late Saturday and continued into Sunday, according to the outlet. The newspaper did not note if the villages attacked were Christian communities.

Locals said they knew of seven dead but mass desertions of villages in the area mean many individuals are not accounted for, so it remains unclear how many have truly been killed or abducted. Families do not have possession of the bodies of the dead, as the danger of retrieving them increased their own risk of being killed. 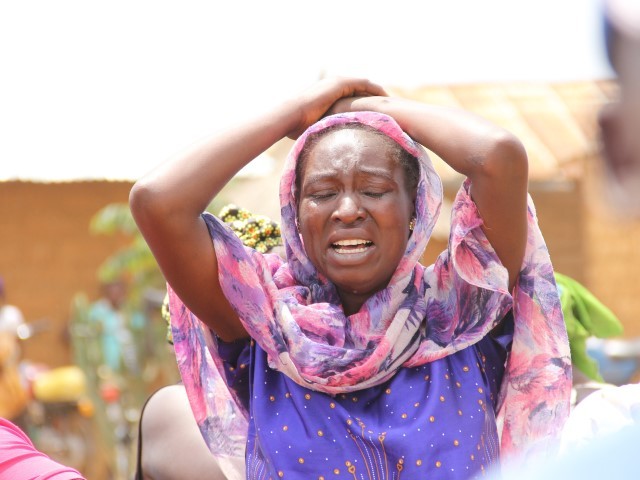 A Christian victim of a Fulani attack in Plateau State, Nigeria. Christian Solidarity International (CSI) has written to U.S. Secretary of State Antony Blinken ahead of his visit to Nigeria on 18 November 2021, to highlight the imminent risk of genocide in the African country and urge him to engage with victims of human rights abuses there.

Citing the BBC, the Premium Times quoted a local: “They took 10 women in Kura village. In Bayauri, we knew they took nine women including young ladies, while seven women were taken in Gana and went to Duma and abducted another seven in the early morning of yesterday Sunday.”

Locals speaking to the Premium Times expressed outrage at the government for doing nothing to stop the attacks or to give those affected and now displaced any shelter or food.

“No food, no decent clothing. I feel bad for them and the situation is terrible. It’s as if there is no government in this country,” one unnamed local said.

While the reports this week did not link the Christmas Day attacks directly to previous threats, the timing of the letter from an unnamed “Fulani association” to northern Nigerian Christians threatening attacks if they did not cease practicing their faith suggests the two are related. The African website Sahara Reporters confirmed in late November the existence of the letter, sent to Christians in Zamfara state. Though addressed to Christians generally, the anonymous people behind it sent the letter to police stations, not to churches or Christian leaders.

A Christian leader requested prayers from the international community in an anonymous statement to Sahara Reporters confirming the letter, asserting, “Let’s pray for Christians in Northern Nigeria, especially in Zamfara State as we are issued a three-year ultimatum to close all churches in the state.”

“Some churches were listed for attack between now and the end of December,” the leader reportedly said, “though the churches that would be attacked according to the Fulani group that wrote the letter are located on the outskirts of the town.”

He noted that the larger Christian Association Nigeria (CAN) had “directed all churches not to hold church activities beyond 5 p.m. for the next three months” to protect believers, significantly impeding services for Advent, the month in which Christians prepare for the arrival of Christmas.

The unnamed Christian leader said he believed the threats of a church attack were “just a trick.” Police officials appeared not to agree, however, as spokesmen for local law enforcement authorities said they would heighten security in the last month of the year near Christian churches.

Zamfara state has been officially governed by sharia – Islamic law – since 1999, ostracizing the Christian minority. Human Rights Watch estimated in 2004 that about five to ten percent of Zamfara residents were Christians, through that population dwindled as Christians fled the implementation of sharia.

In 2018, the U.S. State Department noted that Zamfara was home to widespread jihadist violence, often enabled by the government.

“The Christian Association of Nigeria (CAN) in Zamfara noted a case where a Christian businessman sold land and the certificate of occupancy to a Christian church during the year,” the State Department recalled. “The church attempted to register the sale with the state government, but the sale was not approved because, according to the church, the government was concerned it would build a church.”

“CAN also said Christians in local communities in Zamfara occasionally did not inform the government when building a church because they feared the government would have it demolished,” the American government office noted.

The Zamfara attacks this weekend followed a similar assault last week in Nasarawa state, a central state outside of the national capital, Abuja. Fulani terrorists slaughtered 45 farmers of the majority Christian Tiv community during several attacks throughout the week before Christmas. The mass killing preceded tensions, reports claimed, similar to those in the north, prompted by Fulani herdsmen forcing their cattle onto Christian farmland.

Under President Muhammadu Buhari, an ethnic Fulani Muslim, the Nigerian government has done little to stop the attacks. After the mass killing in Nasarawa, Buhari condemned the “senseless and barbaric” attacks, but Christians report that local authorities do little to respond to threats or complaints of attacks from the victims.

“In 2015, President Muhammadu Buhari .. came to power, and the situation went from bad to worse,” Salihu Musa Umar — the founder of Africa’s Farmers and Herders Initiative for Peace and Development — told AFP in April.

The administration of President Joe Biden removed Nigeria from its list of “Countries of Particular Concern” regarding religious freedom this year, prompting condemnation from international Christian aid groups and Christians in Nigeria.