India recorded its first bird flu death on Tuesday after an 11-year old boy in New Delhi succumbed to complications caused by an avian flu virus of the H5N1 strain, the Times of India reported on Thursday.

Health officials in New Delhi admitted the boy to the state-run All India Institute of Medical Sciences (AIIMS) on July 2 after he exhibited symptoms including a high fever and skin rashes on his legs. The child died on July 20 after suffering “multi-organ failure,” according to an Indian government statement.

“Initially the doctors suspected Covid-19 [Chinese coronavirus], then influenza,” a doctor at AIIMS New Delhi told the Hindustan Times anonymously on July 21. “The boy’s samples were sent to [the Indian] National Institute of Virology in Pune for testing. He was found to have bird flu and contact tracing was immediately conducted.”

The doctor’s account matches a statement released by the Indian Ministry of Health and Family Welfare on Wednesday, which revealed that India’s National Center for Disease Control (NCDC) “is conducting [an] epidemiological investigation involving the [Haryana] animal husbandry department and the Haryana government’s surveillance unit.”

The bird flu victim previously resided in Gurugram, a city in the northern Indian state of Haryana, which borders India’s national capital territory, Delhi, to the northwest. Delhi contains the city of New Delhi. 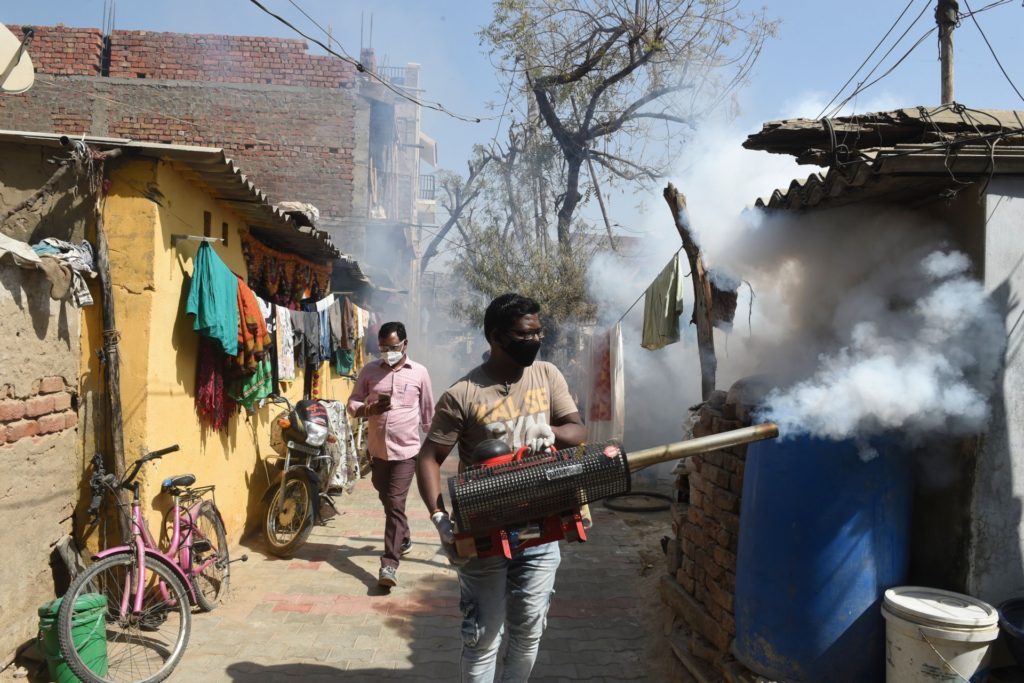 A health worker operates a fogging machine along as a precautionary measure against the bird flu in Sola area, on the outskirts of Ahmedabad on March 5, 2021. (SAM PANTHAKY/AFP via Getty Images)

“Gurugram health officials said contract tracing within a 10 km [6 mile] radius has been initiated. Five rapid response teams have so far screened more than 7,500 people in the area,” according to the Indian health ministry.

The Haryana animal husbandry department’s deputy director, Dr. Punita Gahlawat, told the Times of India on Thursday her epidemiological teams have not yet detected any additional cases of bird flu in humans.

“We conduct regular and random inspections at poultry farms and send samples for testing every month,” she said.

The 11-year-old bird flu victim, identified as Sushil Kumar, “used to live with his grandmother in Chakkarpur [a village of Gurugram],” the Times of India reported on Thursday.

“His parents, who are originally from Bihar, have been staying in Gurugram for the past two months. Sushil’s grandmother’s partner works at a meat shop, which is right next to a poultry shop. The livestock for this shop came from Rajasthan. The health department suspects the boy might have caught the infection from the shop,” according to the newspaper.

Rajasthan is a northern Indian state bordering both Haryana and Delhi to the southwest.

While it remains unclear exactly how Kumar contracted the avian flu, the Hindustan Times on Thursday noted the virus “can be transmitted through contact with faeces and secretions from nose, eye, and mouth of an infected bird.”

The infection doesn’t usually pass on from humans to humans as the virus is not well adapted to attach to receptors in human cells. It usually happens in people handling dead birds, bird droppings, or infected poultry.

The infection leads to lower respiratory tract pneumonia and acute respiratory distress syndrome in humans. It is difficult for humans to get the infection, but once infected avian influenza can be extremely deadly.

The mortality rate of an avian flu infection “can be as high as 60 percent,” according to the Hindustan Times. “In comparison, Covid-19 [Chinese coronavirus] kills fewer than 3 percent of the people it infects, according to official data.”

“India has seen more than half a dozen bird flu outbreaks in poultry in the past two decades, all of which were brought under control, with no human cases reported in the country previously,” Reuters reported on Thursday.