Kanter, who has for years endured persecution against himself and his family by the government of his native Turkey, posted a video to Twitter on Wednesday evening in which he, wearing a shirt bearing the face of the Dalai Lama, demanded freedom for Tibet and condemned the “cultural genocide” of ethnic Tibetans on the part of the Chinese Communist Party.

Under Xi, Beijing has escalated the repression of ethnic minorities and policies to eradicate their culture and replace it with that of the ethnic Han majority. Communist Party officials have enforced the use of the Mandarin language in Tibet, which is not native to the region, and outlawed Tibetan Buddhism. Human rights experts believe Beijing has imprisoned as many as half a million Tibetans in labor camps – a number documented in the first seven months of 2020 alone – where they are subject to indoctrination and torture. The Communist Party has implemented a more large-scale version of these policies in neighboring East Turkestan, home of the Uyghur ethnic group, under the helm of former high-ranking Tibet repressor Chen Quanguo, placing as many as 3 million people there in concentration camps.

Both the New York Times and the Washington Post confirmed that Tencent, the company that has been streaming NBA games in China online since the regime largely removed American basketball from television, removed all Celtics games from its schedule in the immediate future. The Post noted that Tencent cut its live feed of the Celtics-Knicks game on Wednesday before the game concluded. Kanter did not play in the game but attended wearing shoes bearing the Tibetan national flag and anti-communist imagery designed by Chinese-Australian dissident artist Badiucao. 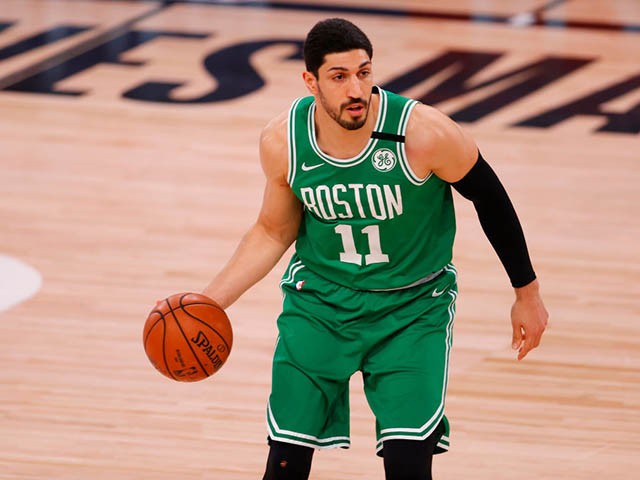 Enes Kanter #11 of the Boston Celtics handles the ball against the Portland Trail Blazers at The Arena at ESPN Wide World Of Sports Complex on August 02, 2020 in Lake Buena Vista, Florida. (Mike Ehrmann/Getty Images)

Tencent also reportedly removed the Philadelphia 76ers from its schedule. The Pennsylvania team hired Daryl Morey, the former general manager of the Houston Rockets, last year. Prior to his departure from Texas, Morey posted a message on Twitter in 2019 reading “Fight for Freedom, Stand with Hong Kong,” which NBA Commissioner Adam Silver revealed cost the league “hundreds of millions” of dollars in broken contracts with the Chinese Communist Party.

Unlike Morey, whose activism was brief and relegated to his social media account, Kanter brought his activism to the court – where, unlike Twitter, Chinese citizens could see it – on his shoes, potentially angering the Communist Party more than the Morey incident. The Celtics did not play Kanter on Wednesday and lost the game.

Tencent is ostensibly a Chinese company but, as China is a communist state, the government essentially controls all its operations. Tencent founder and leader Pony Ma has promoted the Communist Party line of furthering internet censorship and vowed to be “as compliant as possible” with the government through an “antitrust” crackdown. Tencent currently has a deal with the NBA that makes the league $1.5 billion in exchange for the rights to stream NBA games in China for five years.

The Communist Party appears to have also rapidly censored Enes Kanter himself on Weibo, its largest legal social media outlet. Searches for Kanter’s name reportedly offered no results by Thursday.

.@EnesKanter’s tweet reply is totally flooded with harassment from CCP‘s trolls.
Also on Weibo, he has been the latest target of China’s nationalism purge. https://t.co/oODLS3LTWW pic.twitter.com/2u57bimlK9

It was always a matter of time. “Kanter” is now officially banned on Weibo. “Celtics” still searchable. pic.twitter.com/Laf0lt80Qn

While the Communist Party appears not to have banned the Celtics as a team, one of Weibo’s largest Celtics fan pages declared following Kanter’s statement against Xi Jinping that it would stop posting “any information on the team.”

“Any behavior that undermines the harmony of the nation and the dignity of the motherland, we resolutely resist!” page administrators declared.

To cement its objections to Kanter’s remark, the Communist Party formally responded to him through China’s Foreign Ministry.

“The player you mentioned was clout-chasing, trying to get attention with Tibet-related issues. His wrong remarks are not worth refuting,” Foreign Ministry spokesman Wang Wenbin said during his regular Thursday press briefing. 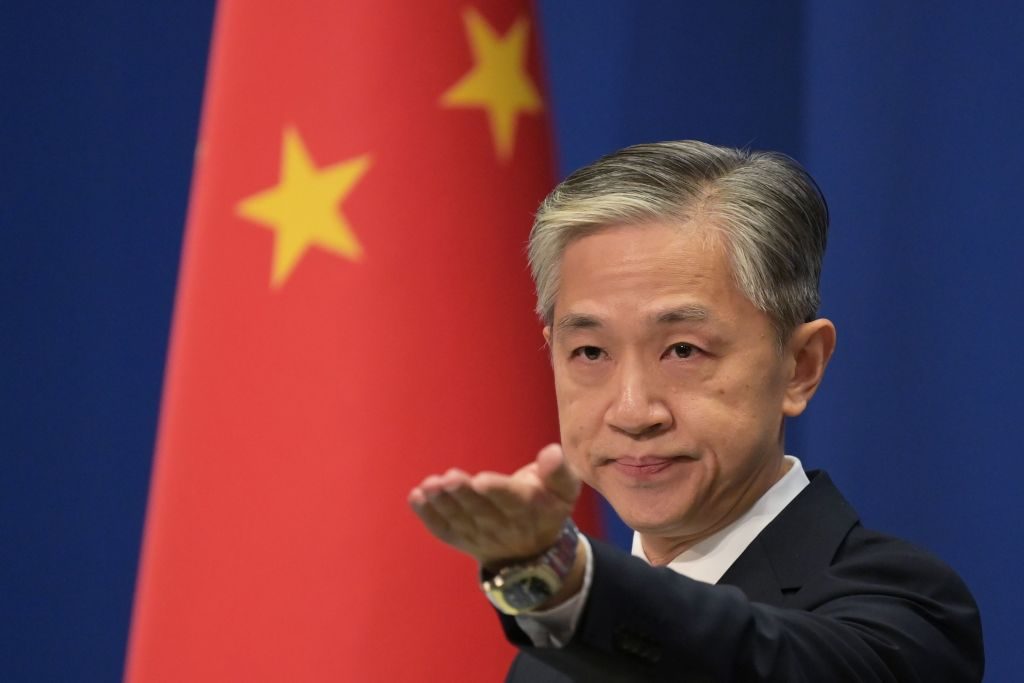 “We welcome unbiased friends upholding objectivity across the world to Tibet. In the meanwhile, we never accept the attacks and smears on Tibet’s development.”

Wang claimed that Beijing’s colonization of Tibet had helped Tibetans move “from backwardness to development, from poverty to prosperity and from isolation to openness, and have created the miracle of a ‘thousand-year leap.'”

“Brutal dictator of China Xi Jinping, I have a message for you and your henchmen … free Tibet,” Kanter asserted in the offending video, which accused Xi and the communist regime of “cultural genocide” against ethnic Tibetans.

“For more than 70 years, Tibetan monks, nuns, intellectuals, writers … and many more have been detained, sent to political reeducation classes, subject to torture, lengthy interrogations,” Kanter detailed, “and even been executed simply for exercising the freedom that you and I take for granted.”

“Shame on the Chinese government. The Chinese dictatorship is erasing Tibetan identity and culture,” Kanter stated. “The cultural genocide in Tibet is so stifling that more than 150 people have burned themselves alive hoping that such a horrific act will raise awareness and attention towards the ongoing abuses within Tibet.”