China’s state-run Global Times on Sunday was tremendously excited by the U.S. House of Representatives passing a $1.2 trillion infrastructure bill, because it expects the U.S. will quickly realize it no longer has the manufacturing capacity to build massive infrastructure projects without China’s help.

The Global Times said it was an “awkward reality” that America’s hollowed-out manufacturing sector no longer has the capacity to support “once-in-a-generation” infrastructure construction, so the Biden administration will inevitably turn to China, the only country that can meet America’s need for “large amounts of industrial goods under such a grand infrastructure program.”

The Chinese paper went on to explain how Congress’ massive infrastructure spending spree will inevitably increase America’s trade deficit with China, obliterate import/export restrictions that were put in place to protect American national security, and finish off America’s hopes of rebuilding its industrial base:

In 2020, China’s infrastructure-related exports to the US totaled about $295 billion, accounting for about 63 percent of its total exports to the US, according to a research report by China International Capital Corp. Therefore, the expansion of US infrastructure investment will inevitably lead to the increased imports from China.

This outcome will only increase US’ trade deficit with China. China’s trade surplus with the US reached $40.75 billion in October, showed customs data on Sunday. While the figure was down from the monthly high of $42 billion recorded in September, it remains on a relatively high level despite the US’ attempt to narrow its trade deficit.

While US politicians repeatedly claim the government needs to reduce trade deficit by cracking down on the so-called unfair, non-market trade practices, it is the massive demand in the US for foreign goods that contributes to its trade deficit.

“With the passage of the $1.2 trillion infrastructure bill, the urgency for the U.S. to lift its tech export restrictions against China will increase,” the Global Times predicted. This would allow the U.S. to assume its proper role as a supplier of computer chips and other high-tech components to China’s mighty industrial sector. 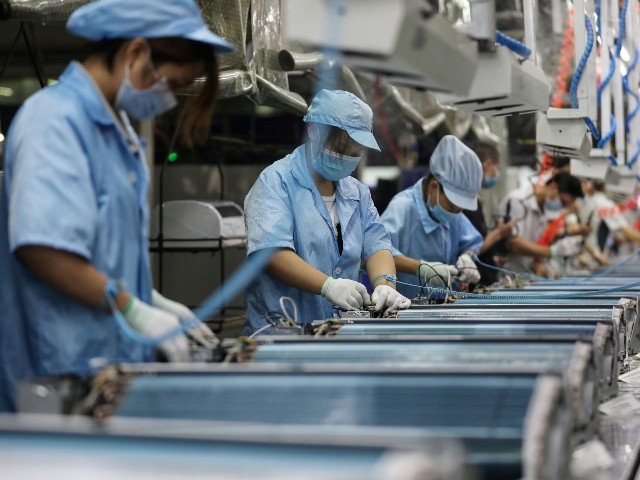 Employees work on an air conditioner production line at a Haier factory in Wuhan, in China’s central Hubei province, on September 10, 2020. (STR/AFP via Getty Images)

On the same day the Global Times was applauding the bill as an opening for Chinese exports, another Global Times editorial mocked the big spenders in the U.S. House for their “feeble imitation” of China’s centrally-planned infrastructure projects:

The bill will by no means solve all the US’ problems and give the country enough vitality to compete with China in the sphere of large-scale infrastructure projects. Most of US major infrastructure construction was driven by the private sector. Now the Biden administration is trying to take that over with an American-style “planned economy.” This is a move trying to reengineer the dynamics of the US economy, using its weak spots to back one of the country’s most daunting tasks. Thus, the chances that the plan will be effectively implemented are slim by any means.

… Some US infrastructure is outdated in comparison with China’s. In fact, the two cannot really be compared. Most of China’s infrastructure was built relatively recently, so it is normal that such projects are more advanced. China has a large population, which determines a higher use rate of infrastructure. So a boost in infrastructure can bring a relatively high return. For example, China’s national conditions make the country a fertile ground for the rapid development of high-speed rail, and expressways are needed in most parts of China. The cost of such infrastructure is high, but it is justified by the needs of large local populations.

The Global Times claimed “U.S. political elites” are “lost in their pride and arrogance” because they simply cannot accept that China is now the dominant industrial power in the world and is far better at building roads, bridges, railways, and other key infrastructure elements.

The Chinese editorialists also laughed at American politicians for paying people not to work with coronavirus subsidies and destroying its own supply chains with a “port logjam.”

“The U.S. has its advantages, but if it wants to be as competitive as China in some spheres, it should turn American people into people who are as diligent as Chinese and turn American officials into being as responsible and hard-working as their Chinese peers,” the Global Times advised.