The Chinese Communist Party published a “historical” document on the history of the Party on Tuesday that lamented mass murderer Mao Zedong’s Great Leap Forward and Cultural Revolution as “mistakes” caused in part by the dictator’s “completely erroneous” analysis of class struggle.

The document, totaling around 36,000 words in its English-language translation, appeared in full on the pages of the state-controlled news agency Xinhua on Tuesday. It is the third of its kind in the 100-year history of the Communist Party to assess in detail policies the Party implemented throughout its rule.

Its derisive language towards Mao is particularly notable in comparison to its extensive praise for current dictator Xi Jinping, whose tenure received no criticism in the document.

The document repeatedly asserted that the entire country must be indoctrinated in “Xi Jinping Thought on Socialism with Chinese Characteristics for a New Era,” Xi’s personal philosophy, and that the entire Party has a responsibility to keep him in power.

Xi enshrined himself – along with Mao and Deng Xiaoping – in the Chinese constitution in 2017.

Mao Zedong is believed to have killed at least 45 million people through widespread executions, famine, and government abuse. 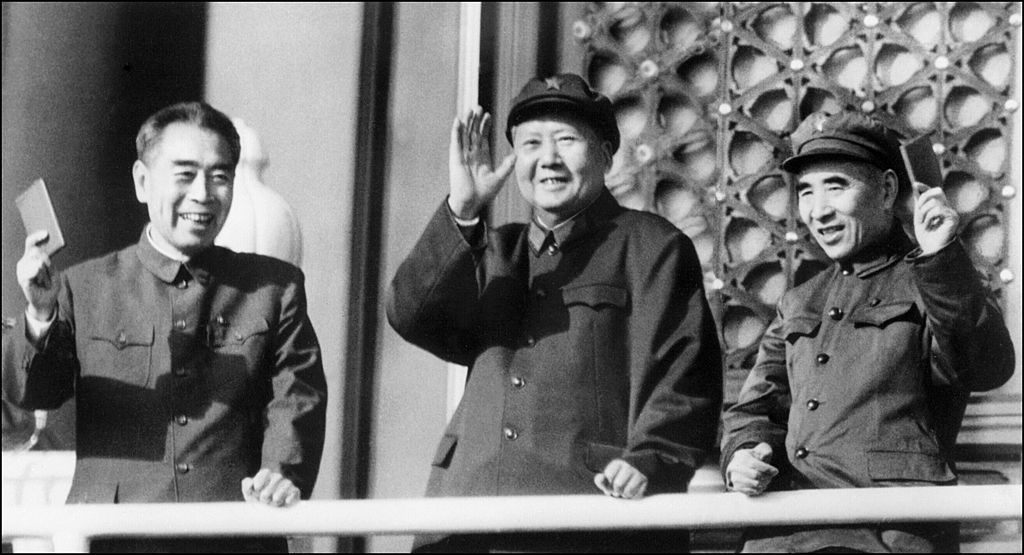 From left: Chinese top communist leaders Zhu Enlai (1898-1975), Prime Minister of the People’s Republic of China from its inception in 1979 until his death, Mao Zedong (1893-1976), leading theorist of the Chinese communist revolution, chairman of the party and President of the Republic, and Lin Piao (1907-71), minister of defense and supporter of the Cultural revolution, wave 03 October 1967 at Tiananmen Square in Beijing the “Little Red Books” as they review troops celebrating the 18the anniversary of the Republic. (Photo credit should read AFP via Getty Images)

“Regrettably … Mistakes were made such as the Great Leap Forward and the people’s commune movement, and the scope of the struggle against Rightists was also made far too broad,” the Communist Party resolution read in part. “Confronted with a grave and complex external environment at the time, the Party was extremely concerned about consolidating China’s socialist state power, and made a wide range of efforts in this regard.”

The Party appeared to hint at considering that Mao’s rule may have killed too many people, though the document does not explicitly state this conclusion. 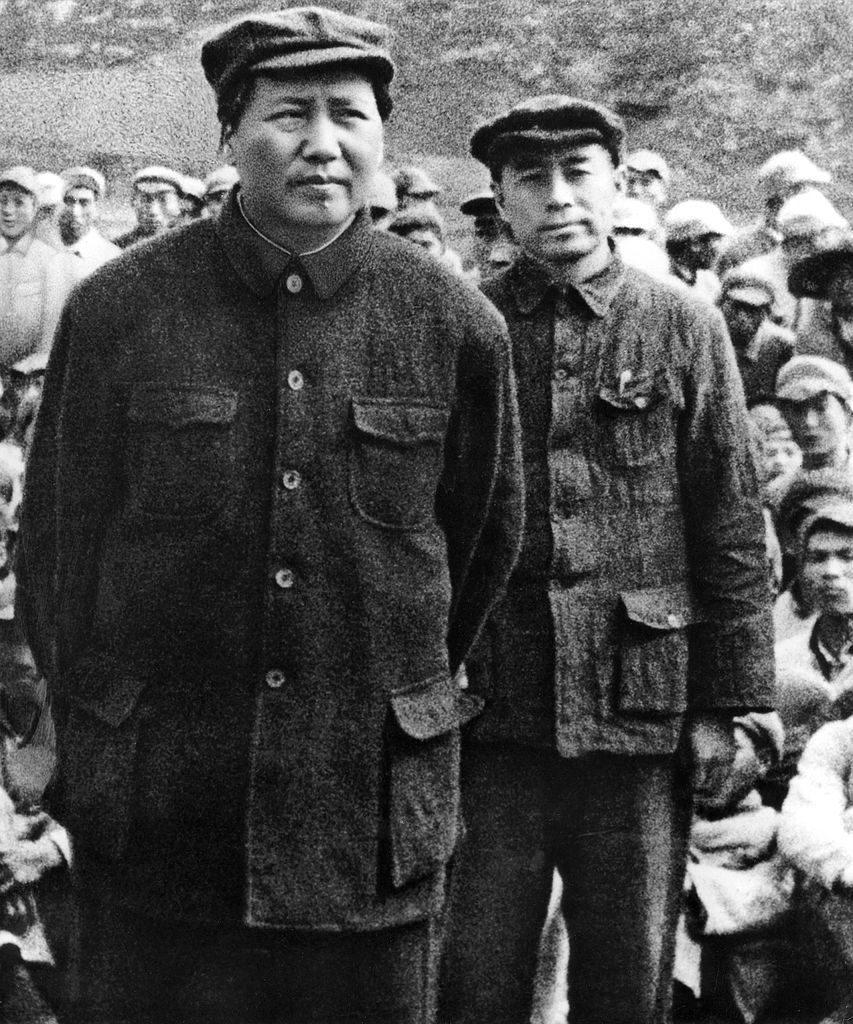 Zhu Enlai (R,1898-1975), one of the leaders of the Chinese Communist Party (CCP), and Prime Minister of China from its inception in 1949 until his death, and Chairman Mao Zedong (L) pose for the picture in Yunnan in 1945 during the war between China and Japan. (AFP via Getty Images)

“Under a completely erroneous appraisal of the prevailing class relations and the political situation in the Party and the country, Comrade Mao Zedong launched and led the Cultural Revolution.”

The document then went on to absolve Mao personally of the “many crimes that brought disaster to the country and the people,” blaming instead “the counter-revolutionary cliques of Lin Biao and Jiang Qing.”

“This was an extremely bitter lesson,” the Communist Party lamented in its historical document this week. 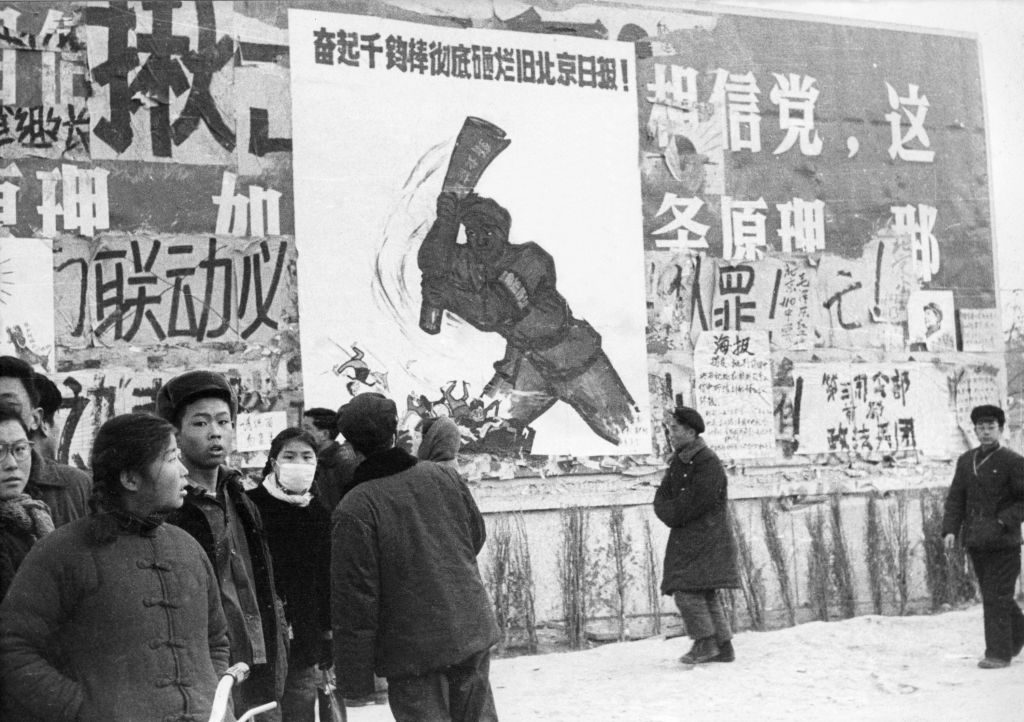 A small group of Chinese youths walk past several dazibao, the revolutionary placards, in February 1967 in downtown Beijing, during the “great proletarian cultural revolution”. (JEAN VINCENT/AFP via Getty Images)

The “Great Leap Forward” was a communist policy under Mao that resulted in what some experts believe is the largest famine in history, believed to have resulted in the deaths of 45 million people. While the main driver of deaths during this period is believed to be food mismanagement, the Cultural Revolution that followed brought a wave of state-sponsored terrorism and extreme abuses that is believed to have killed at least another 2 million people.

The Cultural Revolution was a movement to erase any aspect of Chinese life not beholden to communist authority, resulting in a national terror campaign largely consisting of public executions of suspected “counterrevolutionaries.” Historians have uncovered a trove of evidence of atrocities such as “beheadings, beatings, live burials, stonings, drownings, boilings, group slaughters, disembowellings, digging out hearts, livers, genitals, slicing off flesh, blowing up with dynamite, and more.” Multiple reports also revealed cannibalism of “counterrevolutionaries.”

In contrast to the mild rebuke of Mao’s atrocities, the Communist Party document made no mention of Xi Jinping’s – which include the genocide of the Uyghur people of East Turkistan, mass rape and sterilization of “undesirable” populations, live organ harvesting from political prisoners, and the establishment of one of history’s largest concentration camp systems. It instead asserted that keeping Xi in power was a responsibility of the entire Party, as was being fully “educated” in “Xi Jinping Thought.”

“The leadership of the Communist Party of China is the defining feature of socialism with Chinese characteristics and the greatest strength of the system of socialism with Chinese characteristics, and that the Party is the highest force for political leadership,” the document declared. “Therefore, all Party members must strengthen their consciousness of the need to maintain political integrity … and uphold Comrade Xi Jinping’s core position on the Party Central Committee and in the Party as a whole.” 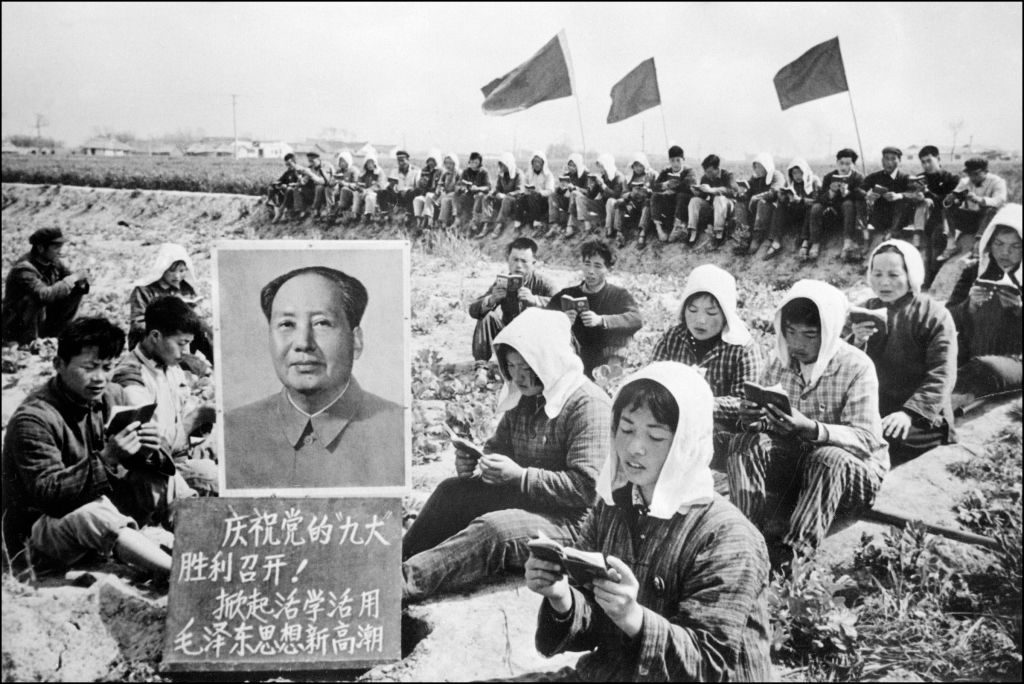 Picture released in 1969 by Chinese official news agency with the caption saying: Chinese peasants gather in May 1969 in a field in Hungching region around a huge portrait of Chinese communist leader Mao Zedong (1893-1976), leading theorist of the Chinese communist revolution, chairman of the party and President of the Republic, as they read collectively “Little Red Book” of quotations from Mao’s works during the “great proletarian cultural revolution”. (XINHUA/AFP via Getty Images)

“We must educate our people with Xi Jinping Thought on Socialism with Chinese Characteristics for a New Era,” the document stated elsewhere, “enhance cohesion by instilling in them the Party’s ideals and convictions, nourish them with the core socialist values, and inspire them with the historic mission of national rejuvenation.”

“Party members and officials should be educated and guided to have firm belief in Xi Jinping Thought on Socialism with Chinese Characteristics for a New Era and to practice it faithfully,” the document commanded.

The South China Morning Post noted in its analysis of the Communist Party document that experts have deemed the text a way to prepare the populate for Xi Jinping to remain in power beyond 2023, when he latest presidential term ends. The Communist Party chooses the nation’s presidents and most have been limited in their time in office. Xi has made significant moves to change that to his benefit, including eliminating term limits for the presidency in 2018 and imposing himself into the text of the Chinese constitution.