Residents in the McKinney, Texas, Craig Ranch subdivision told Breitbart Texas that during the protest movement since the pool party ruckus on Friday, they have received death threats, and their homes have been vandalized.

The community residents say they are in deep fear that protestors, and those who trespassed at the pool party, will return and harm residents and/or further vandalize property.

Craig Ranch community residents told Breitbart Texas that this has been an ongoing problem for weeks. People have been coming from outside of the community into the subdivision and have vandalized homes and frightened neighbors.

This behavior escalated after the pool party on Friday.

According to residents, one home had a brick thrown through a window on Saturday night, and several mothers told Breitbart Texas they have received death threats via Twitter.

Several of the mothers say they have moved their children out of the neighborhood in fear of threatened violence.

One man said that his wife left their home, and he stayed in their residence to defend their property.

Breitbart Texas reported on Sunday that McKinney resident Bryan Gestner posted on Facebook, “This was a Twitter party that turned into a mob event. Jumping pool fence. Assaulting 2 security guards, attacking a mother with three little girls. The video doesn’t show everything.”

Gestner continued saying the kids were drinking and “smoking weed” and they would not listen to any of the adults around the pool.

“This isn’t about race,” he continued. “This is about outside kids invading our neighborhood and had no respect for authority or the residents here. I have a target on my back now, and I have been threatened by these punks that they are gonna shoot up my house, when all I did was try to control the mob and actually tended to the girl and the boy that had a bloody lip.”

“Yall don’t know the whole story,” Gestner continued. “I commend the officer for handling this situation.”

Gestner told Breitbart Texas in McKinney on Monday that he “is being called the next George Zimmerman.” He said “All I was doing was helping people, but ever since the party, I have been called names and threatened.”

All of the residents who spoke with Breitbart Texas except Gestner asked to remain anonymous for their safety.

A Craig Ranch resident told Breitbart Texas that the community supports people’s right to protest as long as they are peaceful, but residents remain fearful of further destruction and criminal mischief in their neighborhood.

Another resident said “There is no racism in the community. This is a happy, ethnically diverse neighborhood. This is about kids and unruly behavior.” 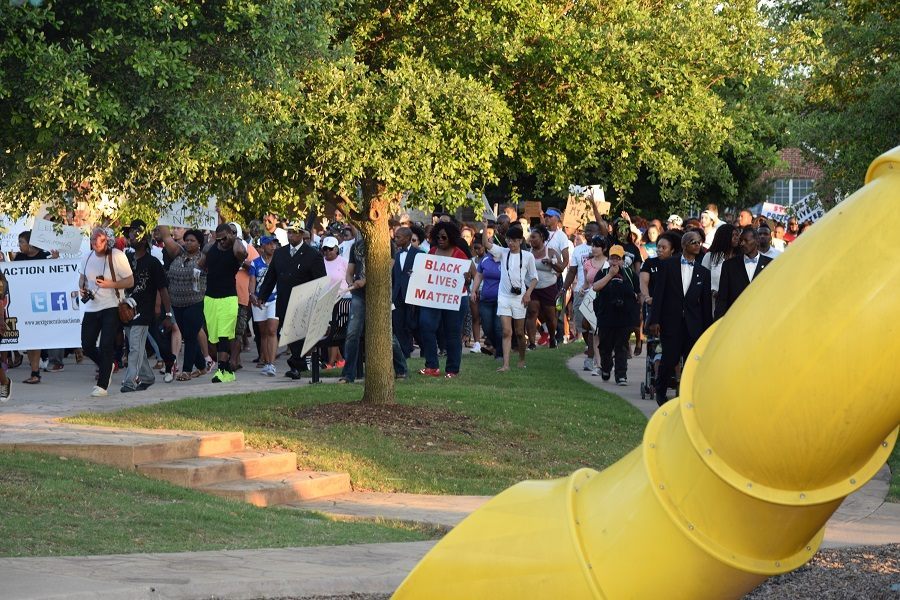 Over 500 people of mixed races, mostly black, protested at the Joyce Kelley Comstock Elementary School in McKinney. From there, they marched through the Craig Ranch community subdivision.

Though technically the demonstration on Monday night remained peaceful, this protest movement has been anything but peaceful.