A Virginia father who works at “abolishing gender stereotypes” continues to receive praise for his Facebook post of his son in a princess costume. 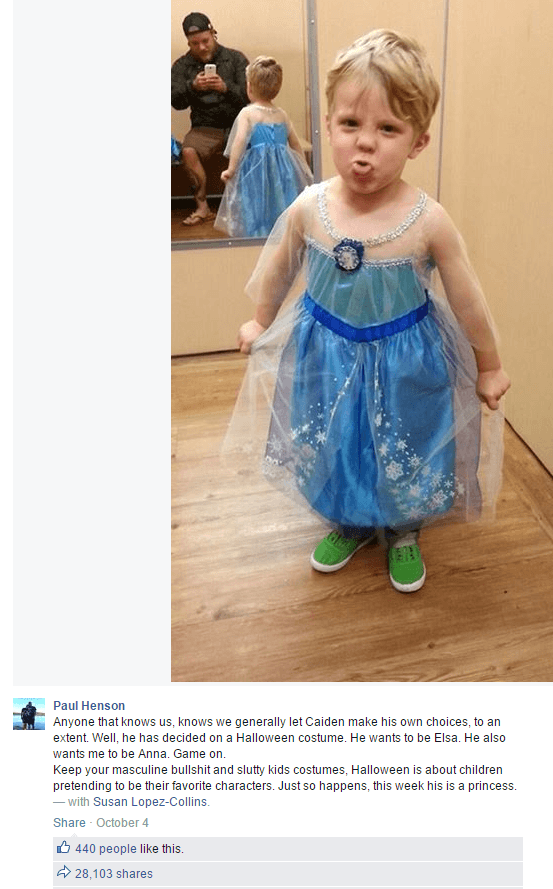 Henson wrote, “Anyone that knows us, knows we generally let Caiden make his own choices, to an extent. Well, he has decided on a Halloween costume. He wants to be Elsa. He also wants to be Anna. Game on,” the Virginia father wrote.

Elsa is a Walt Disney character in the animated movie Frozen. She is the Queen of Arendelle and Anna is the princess of the fictional city. Anna and Elsa are sisters. Queen Elsa accidentally used her power and it turned everything into ice “to curse her home in infinite winter.”

The media has praised the father for letting his son choose his Halloween costume. Cosmopolitan Magazine lauded the father for “shut[ing] down ‘Masculine Bullsh*t’ Haters.” The international fashion and sex advice magazine told readers of “news that will warm your heart.” Newsday said the father exhibited a “bold reaction” to his son’s choice of costumes. My Fox Boston called it a “priceless reaction.” BuzzFeed News called it “The Best Response.”

Yahoo! Parenting reported that Henson calls the response that his Facebook post received “mind-blowing.” He added, “And to me it’s weird because I’m not doing anything that should warrant attention. It should be second nature to support your child. If my son wants to be Strawberry Shortcake, so be it. Let’s do it.”

He also reportedly told Yahoo! Parenting, “A girl wants to be a firefighter or Thor or Spiderman and it’s OK, but when my son wanted to be Elsa, he was getting bullied,” he reveals. “Caiden told his classmates [his costume choice] and they told him, ‘No, you can’t be that. That’s a girls’ costume.’ But his mom and I have always been firm believers in abolishing gender stereotypes so it upset me that his classmates’ parents were probably saying these things. I don’t want Caiden to think that he’s a better person because he’s a man.”

The Facebook post has as of Friday morning received 28,145 Facebook shares, and 440 “Likes.” Henson posted the comments during the afternoon of October 4th. There are 130 comments to the post, including a photo of a man in his own blue gown. 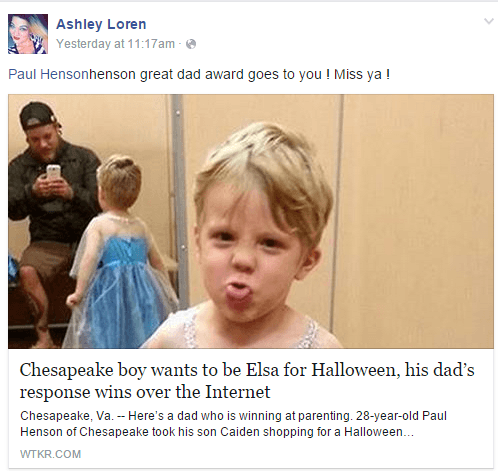 The comments on his Facebook page have been mostly congratulatory and complimentary and said the “great dad award goes to you.” Folks have posted photos of their own sons in princess costumes, and his Facebook page contains posts from media reports about his Facebook post.