The violence was the result of a failed operation by Mexico’s Federal Police where they tried to arrest Julian Manuel “Comandante Toro” Loisa Salinas. The operation took place on Wednesday afternoon in the city’s western side around the Granjas and Esfuerzo Nacional neighborhoods and the Berrendo rural road. 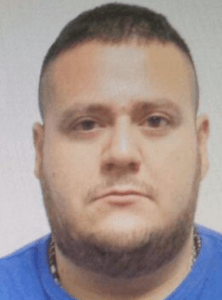 While in the past Mexican authorities have been able to successfully arrest cartel bosses without violence, in Loisa’s case the operation resulted in multiple shootouts and pursuits. The high speed chases resulted in various car crashes as Gulf Cartel gunmen tried to flee from authorities but ended up crashing with innocent drivers who were at the wrong place at the wrong time. The fighting ended up taking place mainly in the Los Fresnos neighborhood and along the Reynosa Viaduct. 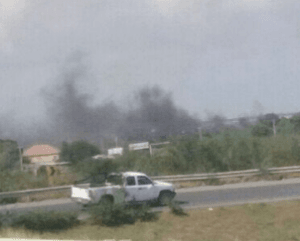 As the violence spread, Federal police officers requested backup form the Mexican Army, Mexican Marines and Fuerza Tamaulipas. Citizens who had not heard about the shootout quickly realized it as more than 50 military and police vehicles with blasting sirens rolled down the city’s main road, Boulevard Hidalgo. Even the Reynosa municipal government had to take to social media to issue out an alert about a blockade or an “unconfirmed contingency warning residents to avoid the area. 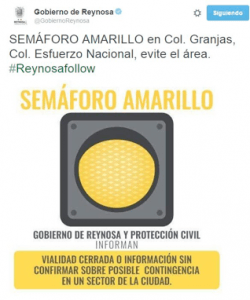 Moments later, the Tamaulipas government also took to social media to issue an alert about a “#SDR” which stands for situation of risk or shootout near the highway leading to Monterrey.

A bullet ridden SUV ended up being left behind long Boulevard hidalgo right outside of the Child and Maternity Hospital. As the violence ensued, a military helicopter arrived at the are to provide air support to the troops on the ground. In an attempt to slow down authorities, cartel lookouts known as “halcones or hawks” began to throw road spikes along multiple roads leading to the area of the shootouts. The spikes were thrown to disable police and military vehicles, however dozens of innocent civilians ended up stranded as their tires blew out.

In an attempt to create cover for the cartel gunmen on the ground, the halcones set stacks of tires on fire in order to impair the visibility of the military snipers that were raining down gunfire from the helicopters.

While the Tamaulipas government has not released any official information about the failed operation, Breitbart Texas has confirmed that one soldier was injured while multiple gunmen ended up behind bars. Authorities have not disclosed if or how many fatalities resulted form the violence.