Breitbart Texas traveled to the Mexican States of Tamaulipas and Coahuila to recruit citizen journalists willing to risk their lives and expose the cartels silencing their communities.  The writers would face certain death at the hands of the various cartels that operate in those areas including the Gulf Cartel and Los Zetas if a pseudonym were not used. Breitbart Texas’ Cartel Chronicles are published in both English and in their original Spanish. This article was written by Coahuila’s “JM Martinez” and Breitbart’s Ildefonso Ortiz.

PIEDRAS NEGRAS, Coahuila — A ranch worker in this border city has been accused of having beaten his wife to death and then going to sleep. Coahuila State authorities arrested 59-year-old Cruz Martinez Castillo who stated that he used a club to murder his wife, 69-year-old Maria de Jesus Hernandez. 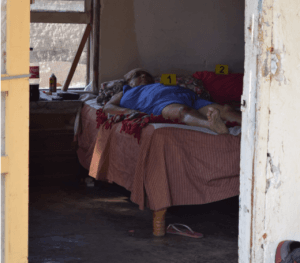 The murder took place last Friday in just yards from the Rio Grande in  a ranch called Papalote in the Francisco Villa neighborhood in this border city. According to the statements that Martinez made before investigators, last Friday he had been drinking at the ranch house where he works and lives. When his wife and he began to argue, Martinez grabbed a club and began to strike her repeatedly to shut her up. When he finished beating the woman, he then went to sleep.

The following morning, Martinez woke up and saw the his wife’s bloody body on the floor near the restroom and unsuccessfully tried to revive her but was not able to. State authorities were called to the ranch where they began their investigations and arrested Martinez for his role in the murder.

Breitbart Texas has expanded its presence into the Mexican state of Coahuila since, in recent years, the area had been a key spot where Narco-violence had reached extreme levels. In Coahuila, Los Zetas had managed to establish their operations with the complicity of various politicians and public servants.

In recent years, police tactical groups such as Los GATES (Spanish acronym for SWAT) have managed to subjugate drug cartels in the area, bringing a sense of peace to the cities that they had not felt in years. Despite the apparent calm, drug cartels continue to send ton after ton of narcotics into Texas.