Residents in various Mexican cities have added U.S. Republican Presidential Candidate Donald Trump to one of their Easter traditions by setting a paper effigy of him on fire.

The event is part of a local Catholic tradition where community presents the struggle between good and evil. The tradition calls for community members to set fire to an effigy of Judas Iscariot who, according to Catholic beliefs, is the apostle that turned Jesus in to the Pharisees.

For several years residents in various Mexican communities have opted to use Mexican politicians or other controversial figures instead of Judas. As Breitbart Texas previously reported, Mexican news outlets and some politicians like former President Vicente Fox have vilified Trump over his public call to have Mexico pay for a wall between the two nations as well as his strong stance on illegal immigration.

In Mexico City, the burning of Trump’s effigy took place in Merced Market; in the city of Puebla’s Arista neighborhood; in Monterrey’s  Obrerista, Trevino, and Sarabia’s neighborhoods, and in Ciudad Juarez’s various neighborhoods near the border fence.

On Sunday additional figures of Trump are expected to be burned in other cities. In the Mexican border city of Reynosa, Pinateria Ramirez has been advertising their Pinatas for the event. 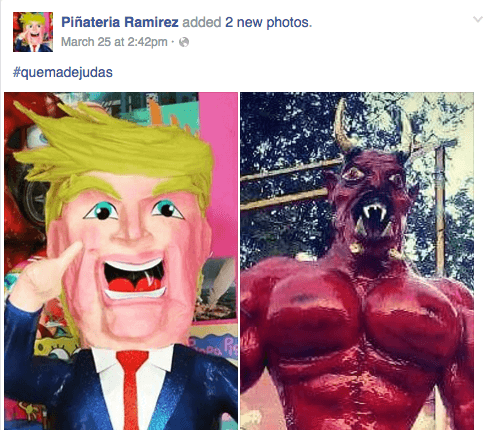 Pinateria Ramirez has become regionally famous for their unique designs which feature Trump, Mexican politicians, Kim Kardashian, and others. In one of their Facebook adds, the local business features a Trump Pinata next to a devil figure in preparation for the “Quema de Judas.”