An Arizona border sheriff is warning his residents to take extra precautions in the coming days after intelligence reports point to Mexican cartel gunmen crossing into the United States to hunt down their rivals. Known as sicarios, the dangerous professional cartel assassins have previously crossed into the U.S. and are expected to cross to hunt down rival “rip crews” or groups who steal drugs from the cartels.

On Monday, Pinal County Sheriff Paul Babeu issued a warning to campers,hikers, mountain bikers and all terrain vehicle riders who frequent the wilderness areas of his county to be extremely cautious and to consider carrying a firearm for their safety. 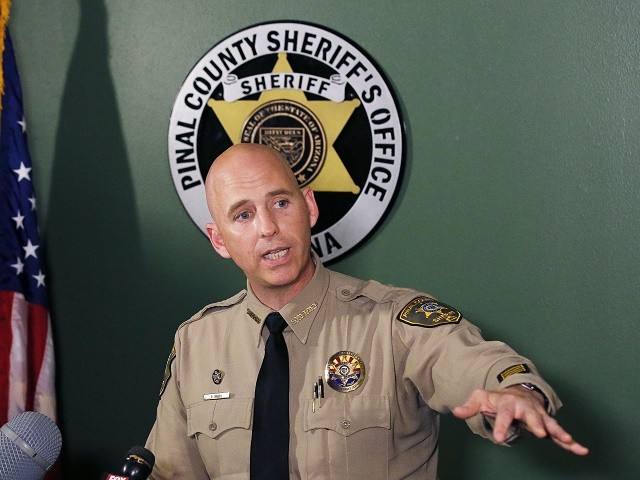 “Recent intelligence reports say Mexican drug cartels have hired armed groups of men to guard drug loads traveling from the U.S.-Mexico Border to the Phoenix area, a significant part of those routes running through Pinal County ” the information provided to Breitbart Texas by the Pinal County Sheriff’s Office revealed.

The job of the sicarios is to hunt down and target “rip crews” which are described as groups of gunmen that roam U.S. border areas looking to ambush and steal loads being carried by cartel drug smugglers.

“We are taking this threat seriously and believe that the public and my deputies deserve to know that there is an elevated risk of encountering gun violence in certain areas of Pinal County,” Sheriff Paul Babeu said in a written statement provided to Breitbart Texas. “It is a distressing reality that President Obama is unwilling to protect the public from armed incursions across the border and well into Arizona. We have been fighting the Sinaloa Cartel violence in Arizona for years. We’ve arrested 21 of their scouts and many more smugglers last year, we are seizing thousands of pounds of their drugs and yet Obama’s response is to erect signs that warn American citizens that it is not safe to travel.”

While not discouraging citizens from enjoying the outdoors in his county, Babeu asked them to do so in a responsible fashion by being aware and taking precautions.

“I’m telling out citizens that want to enjoy the outdoors to travel armed and not let these drug cartels think they have any control over American soil,” he said.

According to the Pinal County Sheriff’s Office, there have been in the past several dealings with cartel gunmen. While the U.S. Border Patrol has not released any information about the case, the sheriff’s office stated that cartel gunmen fired at border patrol agents in April in the Tohono O’odham Reservation.

In March, a PCSO deputy pulled over a vehicle where two cartel smugglers tried to reach for their weapons as a deputy was approaching them.

“I am concerned that when these cartel hit-men have confrontations with the rip-crews in the desserts of Pinal County, innocent Americans and my deputies are going to be injured or killed,” Babeu said. We had similar intelligence six years ago that led to a gun battle. Cartel scouts from one gang began shooting it out with enforcers from a rival gang. In the aftermath of that, we found two cartel scouts that had been murdered on a mountain top.”