HOUSTON, Texas — To celebrate the 240th birthday of the United States, Texas criminal defense lawyers across the 254 counties in the Lone Star State are taking to the courthouse steps to read the Declaration of Independence. The event started in Harris County, Texas, but the reading this year is in every Texas county.

Robb Fickman told Breitbart Texas, “It’s proper for the defense bar to lead the readings of the Declaration of Independence. Other than the military, we are the only group that daily defends the liberty of others. We are the heirs of our Founding Fathers. Like all Americans, we are duty bound to make sure the promise of life, liberty, and the pursuit of happiness, is equally available to all Americans.”

The readings started on Thursday and will continue through the 4th of July.

The Texas Criminal Defense Lawyers Association (TCDLA) was instrumental in the event’s expansion. This YouTube video on the TCDLA website shows in a very poignant way, what the event is about, and why it is important.

“The Declaration of Independence is as relevant a document today as it was 240 years ago. This year’s reading of it on the steps of the county courthouse was historic – the first time in history it’s been read at the same time in all 254 counties in Texas,” said Phil Gommels. The Republican nominee for a criminal court bench in Harris County added, “And hopefully, it won’t be the last!”

Grant M. Scheiner, a criminal defense lawyer in Houston told Breitbart Texas, “The Declaration of Independence is central to who we are as Americans. Publicly reading the Declaration reminds us of the exceptional nation we are and the special role Americans have in preserving our freedoms, in and out of the courtroom, at home and abroad.”

The president-elect of the State Bar of Texas, Tom Vick of Weatherford, participated in a reading in Parker County and said it was a “moving exercise,” reported the Texas Bar Blog. The blog also noted that criminal defense lawyers with an American sign language interpreter, read on the Travis County courthouse steps, the statement adopted by the Second Continental Congress on July 4, 1776.

A website, www.criminaldefensedeclarationreading.com, contains postings of the counties that are participating, as well as photos and the history of prior year’s readings. The website also lists other states, and Texas lawyers who have read the Declaration of Independence while in other states and countries. The states listed are Alabama, California, Georgia, New Mexico, Mississippi, Colorado, Michigan, Washington, D.C., Louisiana, Utah, and Hawaii. Houston criminal defense lawyer Tyler Flood read the American document standing before Parliament while in London one July 4th.

“This is the day we announced our intent to break from tyranny. Unfortunately, we still see vestiges of tyranny even today such as the persecution of innocent bikers in Waco,” said Dallas lawyer Clint Broden. Broden has been fighting for the rights of one of the bikers caught up in the May 2015 Waco, Texas, Twin Peaks biker arrests. 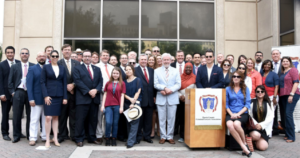 Breitbart Texas has reported extensively about the mass arrests and jailing of bikers in McLennan County. The bikers at the Twin Peaks restaurant were swept up and all charged with the felony of engaging in criminal activity. The bikers were attending a meeting of the Texas Confederation of Clubs and Independents (CoC&I), a meeting which included bikers from Christian clubs and veterans, riding clubs (as opposed to motorcycle clubs), and independents (riders not associated with a motorcycle or riding club). Plumbers, contractors, teachers, businessmen and women, were all caught up in cases where arrest warrants used “fill in the blank” forms and did not state individualized probable cause. Many lost their jobs and their children in family court when they could not get out of jail because of the exorbitant bonds that were set.

The TCDLA condemned the violation of constitutional rights saying “The Waco situation … raises serious concerns. It seems unprecedented that you have 170 individuals charged with the same or similar crimes and identical bail amounts set at 1 Million Dollars each. When you consider the constitutional prohibition against excessive bail as well as the requirement for probable cause prior to arresting an individual, the risks of abuse in the Waco case seem obvious.”

Houston attorney Carmen Roe, a past president of the HCCLA told Breitbart Texas after mass grand jury indictments, “The McClellan County District Attorney’s Office continues to mock our system of justice by presenting 106 accusations in nine hours, giving the grand jury mere minutes to make a decision that could send anyone of the charged to prison for life. Organized criminal activity is a charge requiring little more than a conspiracy to engage in criminal conduct. Most attorneys know that conspiracy is one of the easiest charges to allege and the hardest to defend for any citizen accused.”

The last three paragraphs of the Declaration of Independence which severs the colonies’ ties to the British Crown provides:

In every stage of these Oppressions We have Petitioned for Redress in the most humble terms: Our repeated Petitions have been answered only by repeated injury. A Prince whose character is thus marked by every act which may define a Tyrant, is unfit to be the ruler of a free people.

Nor have We been wanting in attentions to our Brittish brethren. We have warned them from time to time of attempts by their legislature to extend an unwarrantable jurisdiction over us. We have reminded them of the circumstances of our emigration and settlement here. We have appealed to their native justice and magnanimity, and we have conjured them by the ties of our common kindred to disavow these usurpations, which, would inevitably interrupt our connections and correspondence. They too have been deaf to the voice of justice and of consanguinity. We must, therefore, acquiesce in the necessity, which denounces our Separation, and hold them, as we hold the rest of mankind, Enemies in War, in Peace Friends.

We, therefore, the Representatives of the united States of America, in General Congress, Assembled, appealing to the Supreme Judge of the world for the rectitude of our intentions, do, in the Name, and by Authority of the good People of these Colonies, solemnly publish and declare, That these United Colonies are, and of Right ought to be Free and Independent States; that they are Absolved from all Allegiance to the British Crown, and that all political connection between them and the State of Great Britain, is and ought to be totally dissolved; and that as Free and Independent States, they have full Power to levy War, conclude Peace, contract Alliances, establish Commerce, and to do all other Acts and Things which Independent States may of right do. And for the support of this Declaration, with a firm reliance on the protection of divine Providence, we mutually pledge to each other our Lives, our Fortunes and our sacred Honor.