HOUSTON, Texas – Texans turned out in record numbers on the first day of early voting for the 2016 General Election. Harris County led the way with over 67,000 ballots cast.

“I was shocked,” Harris County Clerk Stan Stanart told Breitbart Texas Monday night. “We prepared for a large turnout by increasing polling locations and the number of machines in key locations, but we were still surprised by how many people actually came out.” Stanart said his team reacted quickly by sending additional equipment to places were poll workers were becoming inundated with voters. 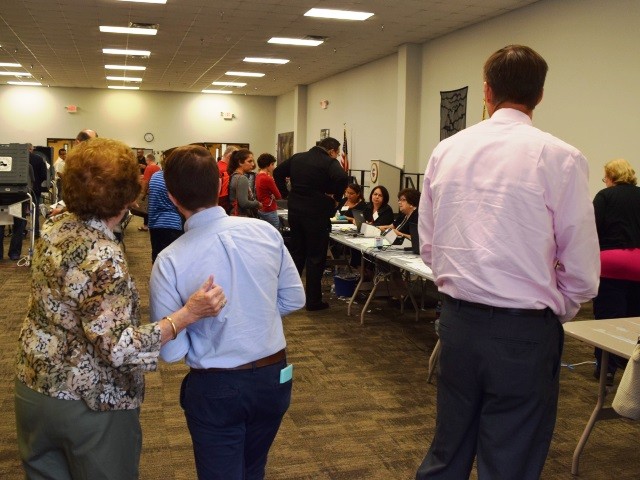 Harris County had 67,471 people show up to vote in person in the county’s 42 polling locations, Stanart said. An additional 61,543 people mailed in absentee ballots as of Monday’s poll closing time. Monday’s in-person total eclipsed the 2012 record by more than 20,000 votes (47,093).

Harris County is not the only one breaking turnout records. Dallas County election officials reported 58,337 first-day in-person votes in a report obtained by Breitbart Texas. That bested the 2008 first-day record turnout of 34,415. Tarrant County also set a new record with 43,149 turning out to break their 2012 record of 30,133, according to the Fort Worth Star-Telegram.

State Senator Lois Kolkhorst (R-Brenham) encouraged Texans to continue to show up at the polls.

“There is an old saying that every nation gets the government it deserves,” she said in an email sent out to voters. “We are in the midst of a referendum in this country, between those who seek to promote liberty and those who seek to stifle it. Plenty of men and women have died to give you the right to vote, so do your part. Make your voice heard, or suffer the consequences.”

The state’s largest Democratic Party-controlled county, Travis, more than doubled its previous record for early voting numbers, according to KXAN. Roughly 35,000 people came out to polling locations compared to a 2012 record turnout of 11,020.

The trend continued further south to Bexar County, another Democrat stronghold. Exactly 35,431 voters cast their ballots in person Monday. This represented an increase of more than 5,000 voters compared to the 2012 record of 30,087, the San Antonio Express-News reported.

Photo ID appears to, once again, be a non-issue for Texas voters. Texas election law still requires a photo ID for voting. However, if a voter does not have a photo ID or cannot obtain one, they can still vote by signing a declaration as to why they do not have a photo ID. They must provide another acceptable form of ID. Stanart told Breitbart Texas that out of the 67,471 early votes cast on Monday, less than ten people showed up without a photo ID and signed the declaration.

The Secretary of State’s office states:

Supporting documentation can be a certified birth certificate (must be an original), a valid voter registration certificate, a copy or original of one of the following: current utility bill, bank statement, government check, or paycheck, or other government document that shows the voter’s name and an address, although government documents which include a photo must be original and cannot be copies. If a voter meets these requirements and is otherwise eligible to vote, the voter will be able to cast a regular ballot in the election.

Texas provides for 12 days of early voting. The polls will be open through the weekend and close Friday, November 4, at 7 p.m. Breitbart Texas reported.

The following are links for early voting locations in Texas’ largest counties. For other counties, contact your local county clerk or election administrator’s office.