The agents, assigned to the Falfurrias Border Patrol Checkpoint in Brooks County, observed a tractor-trailer approaching the inspection station located 80 miles from the Texas/Mexico border. A K-9 agent alerted to the presence of something unusual in the back end of the locked refrigerated trailer. Agents directed the driver, a Guatemalan national, to a secondary inspection station, according to information provided to Breitbart Texas by U.S. Customs and Border Protection officials.

Upon unlocking the trailer, agents discovered 60 illegal aliens lying on, and within, pallets of broccoli lined with thin sheets of ice. The agents determined the temperature inside the trailer to be 49 degrees. 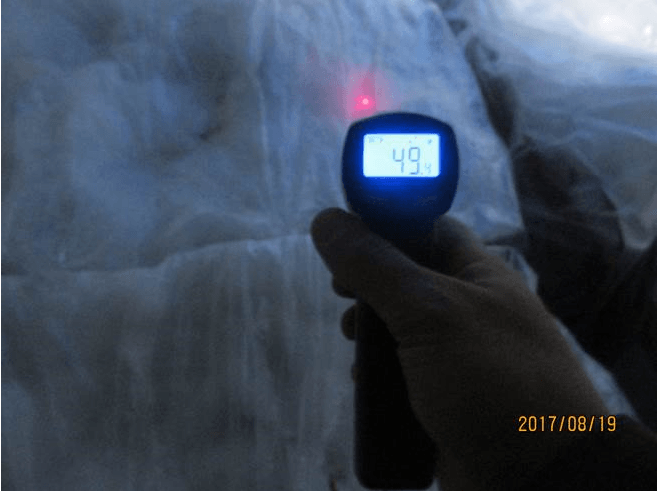 Temperature reading inside the trailer where 60 foreign nationals were being smuggled. (Photo: U.S. Border Patrol)

The agents transported the 60 individuals to the Falfurrias Border Patrol station for processing where they determine the illegal immigrants came to the U.S. from four countries — 22 from Guatemala, 17 from Mexico, 13 from El Salvador, and 8 from Honduras.

Another driver of a refrigerated tractor-trailer now faces the death penalty if he is convicted in a human smuggling case where ten illegal immigrants died after being locked in the back end of a trailer in San Antonio. A federal grand jury indicted Florida truck driver, James Matthew Bradley, Jr., on charges of transporting Undocumented Aliens for Financial Gain Resulting in Death, Breitbart Texas reported.

Bradley said he was traveling from Laredo to San Antonio, after having the tractor-trailer washed and detailed at a truck stop near Laredo. He intended to take the trailer to Brownsville to deliver it to someone who had purchased it. He stopped at the Wal-Mart and heard banging and shaking in the trailer.

One week ago, Border Patrol agents in Edinburg, Texas, arrived on the scene of another incident of human smugglers using a trailer to transport their human cargo. Family members in Mexico called police to report people being locked in the back of a very hot trailer.

The caller said their relative was trapped inside a tractor-trailer parked at the Flying J truck stop in Edinburg. When police arrived on the scene, they began a trailer-to-trailer search. They eventually located a trailer where they received a response of people knocking on the walls from inside.

Border Patrol agents assigned to the Rio Grande Valley Sector also responded to the scene and helped in the recovery and identification of the illegal aliens. Officials report they detained two Cuban nationals (male and female) in connection to the human smuggling case.

The callous human smugglers kept the 17 illegal aliens locked in the hot trailer for eight to nine hours, police stated.

Border Patrol K-9 teams are trained to detect the presence of drugs or human cargo in the back of cars, trucks and trailers.