PIEDRAS NEGRAS, Coahuila — A series of cartel banners called out the former secretary of state as the man who helped protect key cartel gunmen by making them commanders of an elite tactical police unit.

At least five banners were left behind in various areas of Piedras Negras which accused former Secretary of State Victor Zamora of previously protecting cartel hitmen and making them leaders of the special police unit GATES (Spanish acronym for SWAT). The unit has since been transformed into Fuerza Coahuila. 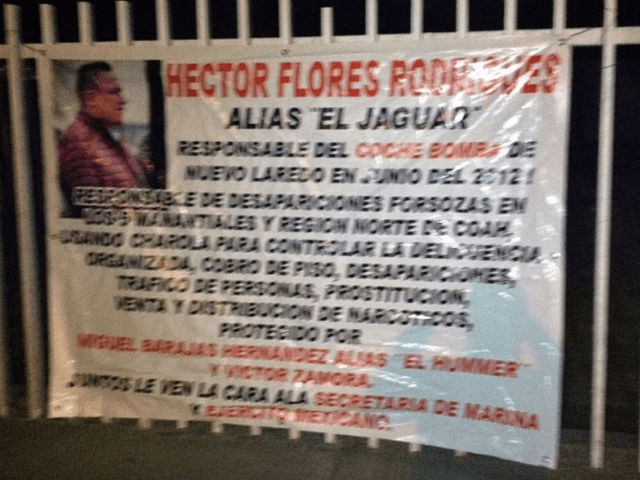 As Breitbart Texas reported, from the latter part of the 2000s until 2013 through widespread public corruption, Los Zetas Cartel was able to expand and surpass the capabilities of law enforcement in Coahuila. Their explosive growth led to the creation of GATES to fight the cartel head-on. Over time GATES and its successor, Fuerza Coahuila, managed to push cartels underground.

The lawmen known as El Jaguar and El Hummer made headlines in 2013 when they became the target of an investigation for their alleged roles in preparing explosive devices that were used during a series of attacks in Nuevo Laredo in 2012, Mexico’s Milenio reported at the time.