El Centro Sector Border Patrol K-9 agent “Pecky” will retire at the end of November. Her retirement concludes more than ten years of service with the Border Patrol and the interdiction of approximately 2.5 tons of various drugs.

El Centro Sector officials announced the coming retirement of a ten-year veteran K-9 agent. Border Patrol K-9 “Pecky” began her service in September 2009. “Her drive and ability to perform at a high level for many years is appreciated by so many in the El Centro Sector,” Border Patrol officials said in a written statement. 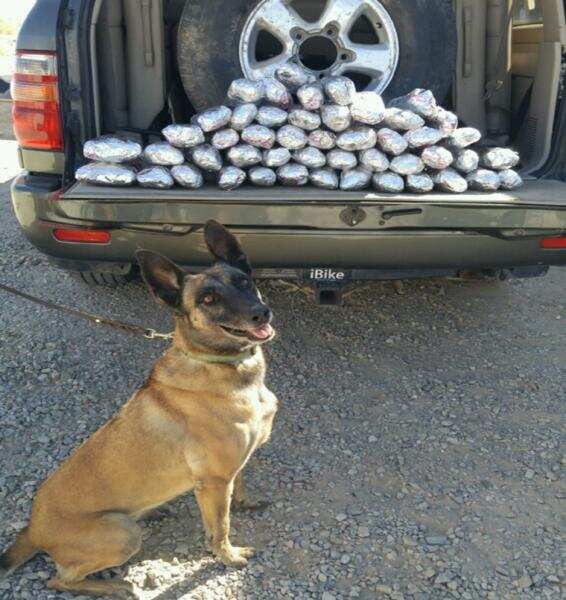 Pecky’s accomplishments include the seizure of 1,823 pounds of marijuana, 578 pounds of cocaine, 1,403 pounds of methamphetamine, and 1,018 pounds of heroin, according to the statement. “These collective seizures have an approximate street value of 27 million dollars,” officials stated.

“These service dogs are invaluable to the agency,” El Centro Sector Acting Chief Patrol Agent Ryan J. Scudder said. “I can’t express enough how proud we are of our K-9 department.”

Agents from the El Centro Sector gathered this week to honor and bid farewell to Pecky and wish her a “retirement full of sandy beaches.” Her retirement is effective on November 30.

Agent Pecky, an 11-year-old Belgian Malinois, received her training and admission to service under the U.S. Customs and Border Protection Canine Program.

“The primary goal of the CBP Canine Program is terrorist detection and apprehension,” CBP officials stated. “The working CBP canine team has become the best tool available to detect and apprehend persons attempting entry to organize, incite, and carry out acts of terrorism.”

“The Canine Program’s secondary goal is detection and seizure of controlled substances and other contraband, often used to finance terrorist and/or criminal drug trafficking organizations,” the report continues.

Border Patrol K-9 agents are trained to detect drugs being smuggled into the U.S. and human cargo. Additionally, the K-9 agents track or trail the routes of migrants and smugglers.