While investigating a residence believed to be operating as a stash house on July 22, agents observed a vehicle leave the residence with numerous people inside. Constable deputies conducted a vehicle stop and identified six occupants in the vehicle as foreign nationals illegally in the United States.

Agents and deputies returned to the residence and located a small structure in the back yard which held an additional 16 people found to also be in the country illegally. The foreign nationals all came to the U.S. from the countries of Mexico, Honduras, El Salvador, and Guatemala, according to information obtained from U.S. Customs and Border Protection officials.

This story reads like a routine criminal investigation in South Texas. Photographs of the stash house tell a much more in-depth story of human suffering. The old saying a picture is worth a thousand words make sense when presented before someone who has been to countless stash houses during their law enforcement career.

The agent immediately noticed the lack of windows along one side of the structure. Instead, there appeared to be a painted sheet of plywood covering what was most likely a window or door at one time. 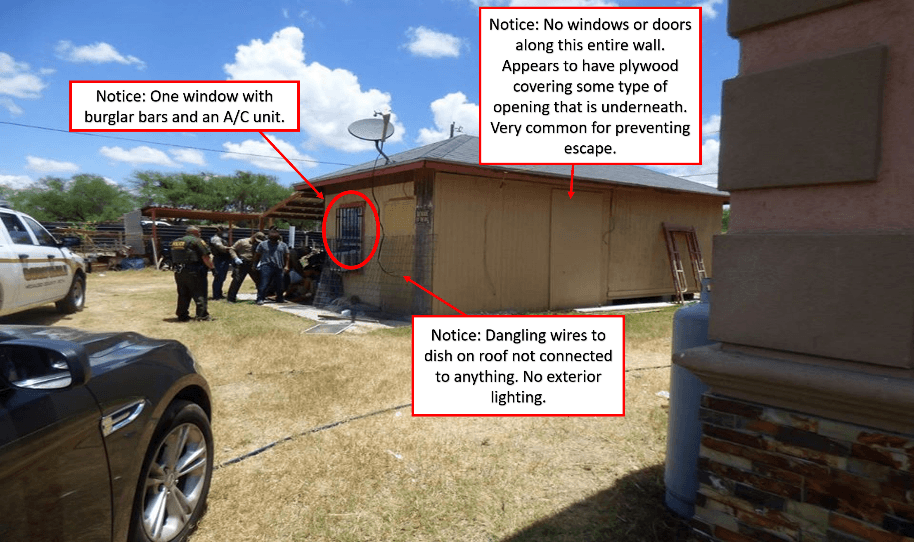 This is designed to prevent escape, the agent explained. The agent also observed no exterior lighting under the overhangs and only one window covered by burglar bars on the outside.

Why is everything boarded and barred?

Two reasons, the agent explained, no electricity or to keep those held inside from getting out.

The agent said the small air conditioning window units are commonly seen at stash houses but, “in my experience,” rarely work. If they do have them, most smugglers would not allow them to run the A/C because of the cost. They do not care enough about the people they are smuggling, the agent said. They are treated as sub-human in most cases we work. Wires dangling from the TV dish are just hanging down, not even connected to anything. 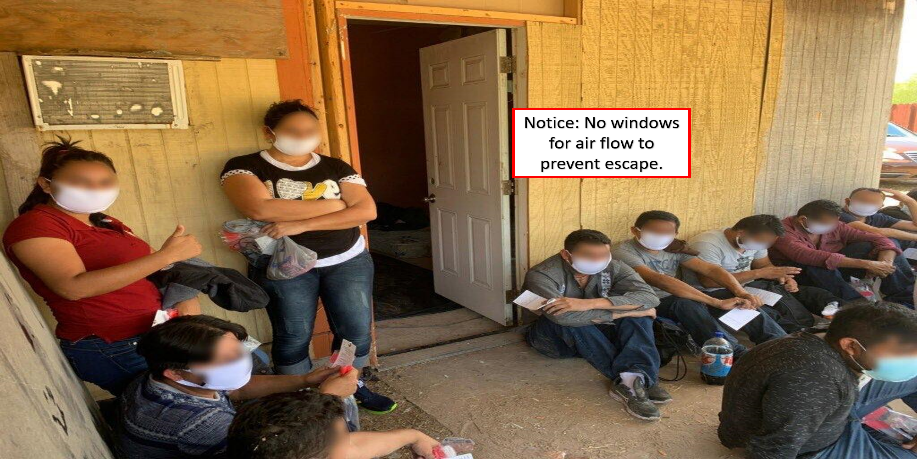 No windows were located near the only entrance observed for the structure, the agent continued.

When you open the door to a typical stash house you rarely see any furniture — only mattresses lining the floor beyond the path of the door’s ability to swing inward — one after another. The agent explained this is a very common theme in human smuggling stash houses.

It is also common for smugglers to take migrants’ shoes and often clothing from the migrants so they cannot escape. They use it as a form of punishment or intimidation in some cases.

In the south Texas brush, everything has a thorn so you are not getting far without shoes on your feet, the agent explained.

Last week Breitbart reported a similar incident in neighboring Starr County, Texas, where Border Patrol agents working in collaboration with the sheriff’s office made entry into a residence and rescued 23 migrants inside held against their will by an armed gunman.

Officials responded to the stash house after a victim called for help via a cell phone. They were all rescued safely, according to law enforcement. Officials reported the migrants to be from Guatemala, Honduras, and Mexico.

There is another factor unseen in these photographs — the extreme heat of the South Texas summer. Many of these structures have no running water or bathroom facilities. It is common for migrants to be forced to use buckets or only be allowed to go outside during the night to relieve themselves and quickly return.

The mistreatment of men, women, and children is a common theme told to U.S. law enforcement once removed from the prying eyes of the smugglers. Stories of beatings and rapes during their journey to the U.S. add another layer of trauma that agents need to contend with while fighting to end human smuggling along the southwest border.

In April 2016, Breitbart’s Brandon Darby and Bob Price reported on the abuses of migrants throughout the human smuggling process.

The article explains the series of stash houses migrants are forced into along the human smuggling pathways. It also highlights the sexual abuse of women and assaults on men held in multiple stash houses as they move from Central America through Mexico and into the U.S. interior.