Shootouts, carjackings, armed robberies, and other violent crimes plague the Mexican border city of Reynosa as two rival factions of the Gulf Cartel fight for control. The violence in the region continues despite claims by government officials of a decrease in crime.

The border city of Reynosa is immediately south of the border from the Pharr, McAllen, Mission, Hidalgo area in South Texas. It is considered one of the busiest commercial land ports in the nation.

Despite the economic impact caused by international factories, in recent years the region has seen an ongoing number of fierce shootouts and high-impact crimes as rival factions of the Gulf Cartel fight for lucrative smuggling corridors into Texas.

The most recent shootout took place on Saturday when authorities clashed with cartel gunmen on the city’s south side. While no arrests were made, authorities managed to seize one SUV with weapons inside. Those clashes have become an almost daily occurrence in Reynosa — particularly during the early morning hours or late at night in the outskirts of the city.

Earlier in the week, authorities in the nearby town of Diaz Ordaz seized a cartel armored SUV that had been painted to look like a Mexican Army vehicle. 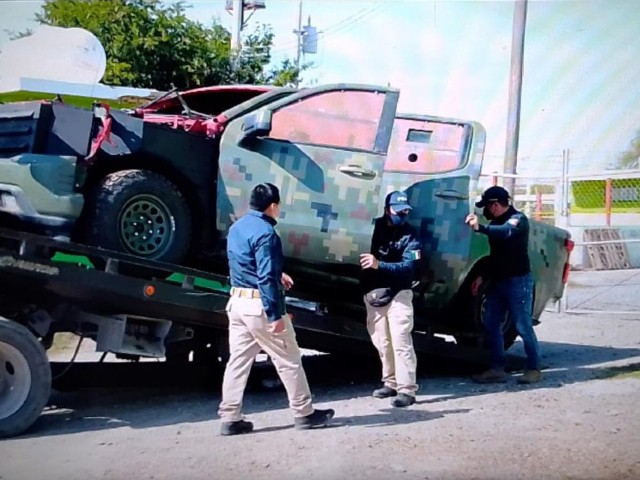 Since last year, the Gulf Cartel in Reynosa saw a dip in their revenue sources as coronavirus-related lockdowns and border restrictions made it more difficult to smuggle migrants and drugs into Texas. Coupled with the high cost of having an army of gunmen ready to fight off their rivals, the criminal organization quickly began to experience a cash flow problem creating difficulties in paying their gunmen. That cash crunch turned into a new wave of crime as the Gulf Cartel allowed their gunmen to prey on small businesses and unsuspecting motorists through armed robberies as a way to make up their lost earnings.

In recent months, Reynosa has been plagued by a series of daily armed robberies where small teams of gunmen continuously rob convenience stores and pharmacies. Often, several robberies are being reported on a daily basis. The gunmen manage to steal moderate amounts of cash along with liquor and cigarettes.