According to sources, the accident occurred after Texas State Troopers attempted a vehicle stop on suspected human smugglers. Official sources tell Breitbart Texas that the pursuit ultimately resulted in a head-on collision. The nationalities of those involved remains to be determined.

The suspect vehicle is a 2019 Dodge Ram, which impacted a 201o Ford pickup. Police sources say that the suspect human smuggler in the Dodge attempted to flee the scene on foot but was eventually arrested. 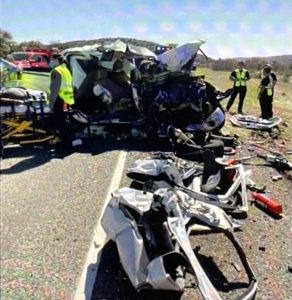 The accident comes amid drastic shifts away from immigration policies executed by the Trump administration. Relaxed orders have resulted in a significant increase in illegal entries and reduced the Border Patrol’s ability to conduct some routine patrols due to the humanitarian needs of unaccompanied children.

This is a developing story and will be updated as more information becomes available.

Randy Clark is a 32-year veteran of the United States Border Patrol.  Prior to his retirement, he served as the Division Chief for Law Enforcement Operations, directing operations for nine Border Patrol Stations within the Del Rio, Texas, Sector. Follow him on Twitter @RandyClarkBBTX