A law enforcement source, speaking on a condition of anonymity, provided Breitbart Texas with a memorandum authored by Rodney S. Scott, Chief of the United States Border Patrol. In the April memo, Scott advises Acting Customs and Border Protection Commissioner Troy Miller that he cannot endorse a new communications and vocabulary policy set in motion by the Biden Administration.

The policy change requires Customs and Border Protection and Immigration and Customs Enforcement personnel to refrain from the use of the terms “alien, unaccompanied alien children, undocumented alien, illegal alien, and assimilation” in internal and external communications. The terms must be substituted with “non-citizen, non-citizen unaccompanied children, undocumented non-citizen, and civic integration.” The policy went into effect on April 19. 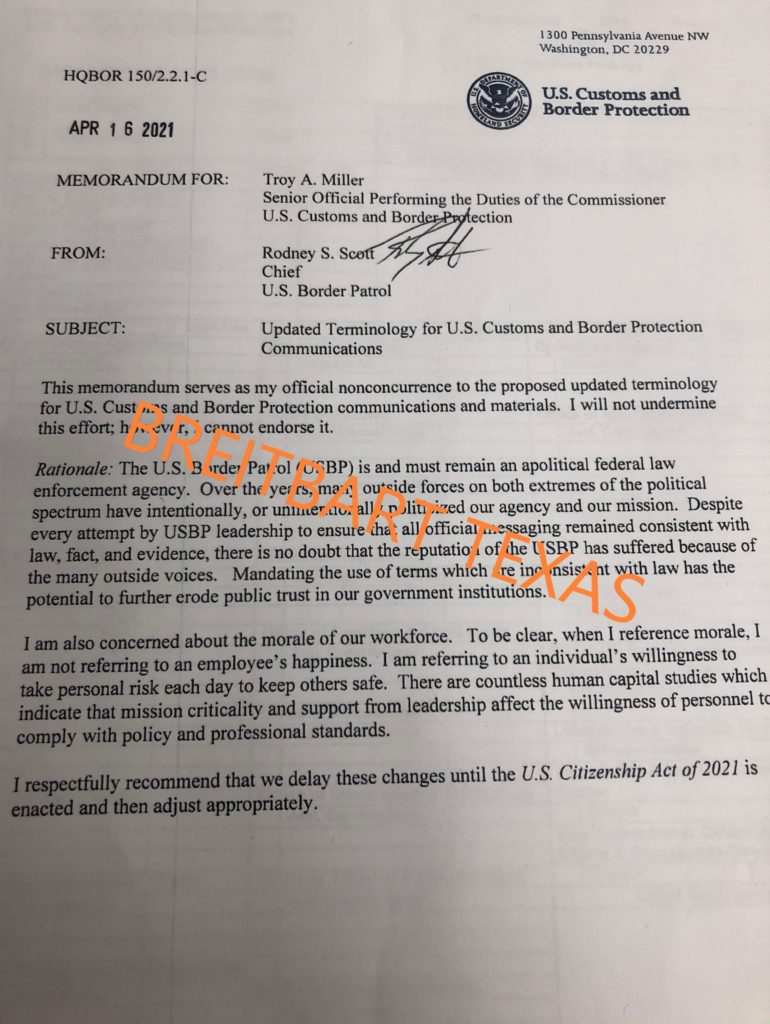 Chief Scott’s memorandum recommends waiting for the enactment of United States Citizenship Act of 2021 which would remove the prohibited terminology from the Immigration and Nationality Act. Under current immigration law, the term “alien” is legally defined as a foreign national present in the United States.

Chief Scott states in his memorandum that he would not undermine the effort to implement and enforce the new policy but had reservations about politicizing his agency. He explains his rationale:

The U.S. Border Patrol (USBP) is and must remain an apolitical federal law enforcement agency. Over the years, many outside forces on both extremes of the political spectrum have intentionally, or unintentionally politicized our agency and our mission. Despite every attempt by USBP leadership to ensure that all official messaging remained consistent with law, fact, and evidence, there is no doubt that the reputation of the USBP has suffered because of the many outside voices. Mandating the use of terms which are inconsistent with law has the potential to further erode public trust in our government institutions.

Despite Scott’s objection, the policy was ultimately put in place and remains in effect. It will not, however, impact official reports and legal documents that must contain the terms codified in the Immigration and Nationality Act.