A multi-agency effort led to the arrest of two United States citizens accused of smuggling five migrants in remote South Texas. After fleeing a U.S. Border Patrol checkpoint, the two smugglers led law enforcement officers on a vehicle pursuit that ended when the truck crashed onto railroad tracks in La Salle County, Texas. After searching the vehicle, officers discovered a loaded handgun.

The incident unfolded early Wednesday when Border Patrol agents attempted to inspect a Nissan pickup truck at a permanent immigration checkpoint on Interstate 35 north of Laredo. The suspected smugglers fled from the checkpoint. The pursuit ended when the vehicle became disabled while driving onto a railroad track.

Laredo Sector agents assist La Salle County SO and @TxDPS in stopping a human smuggling attempt. The vehicle became stuck on railroad tracks. Once all subjects were in custody, a 9mm pistol and marijuana were found inside the truck.@CBPSouthTexas #LSCSO #TXDPS#HonorFirst pic.twitter.com/G0N1H6vKOV

The driver of the vehicle attempted to elude the deputy by driving recklessly on the interstate highway. Border Patrol agents and Texas Department of Public Safety Highway Patrol troopers joined the pursuit in hopes the driver would yield. Instead, the driver left the highway and attempted to cross nearby railroad tracks. The impact with the tracks disabled the vehicle, leaving it stranded on the tracks. 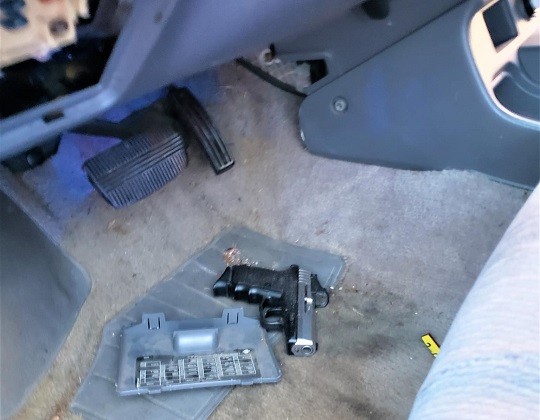 Authorities arrested five migrants in addition to the two suspected human smugglers. Law enforcement officers discovered a 9mm handgun concealed in the vehicle after a post-arrest search. The driver of the vehicle and a suspected accomplice were taken into custody by the La Salle County Sheriff’s office and face charges of human smuggling.

The migrants were turned over to the Border Patrol for administrative processing and removal.

La Salle County law enforcement authorities have become accustomed to an increase in vehicle pursuits in the area in recent months. Breitbart Texas visited with law enforcement authorities in the area who say they are not seeing an overwhelming increase in migrants being smuggled, but rather, a change in the tactics used by smugglers including leading officers on high-speed pursuits.

La Salle County Constable Rene Maldonado Jr. told Breitbart Texas the change can be attributed to cartels recruiting younger drivers via social media who perhaps otherwise would not be inclined to participate. Some, he says, are active drug users answering the call to feed their addictions.

The southern end of Interstate 35 stretches from Laredo, Texas, more than 1,500 miles to Duluth, Minnesota. La Salle County is only 30 minutes north of Laredo. The interstate can carry at least 200,000 vehicles per day in this area, according to the Texas Department of Transportation.