“Operation Ohio Knows” resulted in 161 arrests of individuals allegedly trying to purchase sex, in some cases with a person posing as a minor, Fox 8 reported Monday.

It was the largest human trafficking bust in Ohio’s history, according to Yost.

“The suspects arrested include a home improvement contractor, a city council member from Elyria identified by Elyria police as Mark Jessie, 64; a firefighter, a teacher, a professor and even a pilot, making over $200,000 a year, who haggled the price down to $15. Another suspect was arrested with a 2-year-old in the car,” the article read. 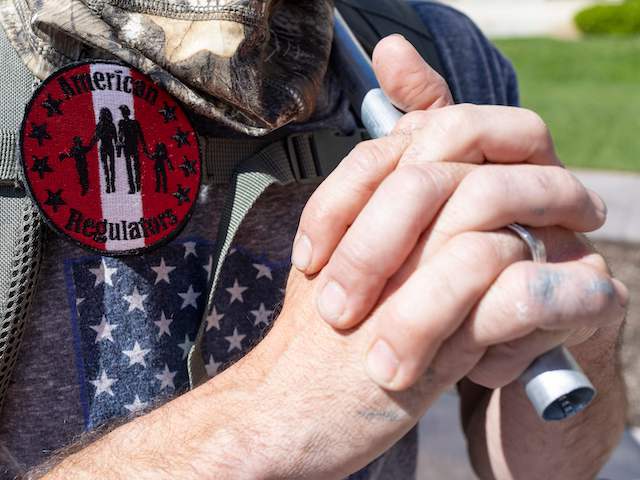 A member of the American Regulators wears a patch and holds a flag during a rally in front of the Ohio Statehouse against child human trafficking in Columbus, Ohio on May 1, 2021. (Stephen Zenner/AFP via Getty Images)

According to Elyria City Council President Vic Stewart, Jessie was the incumbent Democrat Ward 3 councilman on the ballot for the November election.

Yost said during a press conference that for the first time in the state, a statute was enacted making it a more serious crime to buy sex than sell it because the “John” was in it for the money, noting if there were no buyers, trafficking would not exist.

“Reducing the demand means that we reduce the number of people who are victimized by human trafficking,” he explained, adding, “The survivor does not tell you, ‘I don’t really want to do this but if I don’t I’m going to be beaten,’ or ‘If I don’t he’s going to withhold my drugs and I’ll go into withdrawal and I can’t deal with that.'”

“People who traffic other humans are doing it for a really simple reason — money. And if there’s no demand then there will be no market,” Yost said “Reducing the demand means we reduce the number of people who are victimized by human trafficking." pic.twitter.com/vj1E5kdVk8

COMING UP: @Allison247Now continues her investigation into human sex trafficking and was embedded with @GroveCityPolice "Operation Ohio Knows," sting. @Yost4Ohio just announced the statewide operation led to the arrest of 160 men paying for sex and recovered 10 missing children. pic.twitter.com/JQ0ix1fQvZ