Government-approved opioids almost doubled the number of young men who were pushed out of the workforce before the election of President Donald Trump, according to economists at the Federal Reserve Bank of Cleveland.

“Our estimates imply that prescription opioids can account for 44 percent of the realized national decrease in men’s labor force participation between 2001 and 2015,” said the report, which was written by Dionissi Aliprantis, Kyle Fee, and Mark Schweitzer.

The report focuses on rural areas which comprise 30 percent of the U.S. population, saying:

Legal opioids did more damage to young men than to young women, the report says:

The legal drugs — not the economic decline — caused the opioid dropout, the authors say:

We find that our results are not simply an artifact of the same areas being impacted both by the opioid crisis and by weak labor market conditions; areas with weak or strong labor markets react equivalently to increased exposure to legal opioids.

Legal opioids helped kill tens of thousands of Americans. Breitbart News reported in December 2016 that “overdose deaths from legal prescription opioids rose four percent from 2014’s 16,941 up to 17,536 in 2015. These drugs include oxycodone, hydrocodone, and methadone.”

The dropout by millions of American men had a huge impact on wages, wealth, and economic activity in heartland America, and millions of young men are still without jobs in President Donald Trump’s tight labor market. “More than 12 million Americans have remain sidelined from the U.S. workforce despite their wanting full-time employment, federal data suggests,” Breitbart reported April 15.

However, some of the young men hurt by opioids are returning to the job market under Trump’s low-immigration “Hire American” economic policies. Heartland states have gained jobs and investment faster than the Democrat-dominated coastal cities and countries won by Hillary Clinton in 2016, according to an April 17 article by the New York Times:

Now, under a Republican administration, job growth rates in Trump country are rising faster than they are in Democratic America. As the national unemployment rate hovers at just below 4 percent, far more red states than blue states are setting records for low levels of joblessness.

“Everyone’s accelerated, but Trump counties have gone from lagging Clinton counties to seeing faster job growth,” Mark Muro, a senior fellow at Brookings wrote by email. “Redder, smaller, more rural communities really are ‘winning’ a little more. So long as there’s no recession, that may shape the atmosphere surrounding the 2020 election.”

During the first 21 months of the Trump administration — January 2017 to September 2018 — both Clinton and Trump counties continued to experience faster rates of job growth. But the increase was substantially larger in Trump counties, where the rate of growth increased from 1.5 to 2.6 percent.

But much of that gain has been among young women, not young men, according to the Wall Street Journal:

The workforce participation rate for young men aged 25 to 34 fell three points from 2009 to 2014 and has nudged back up to half a point since mid-2017, according to the Wall Street Journal. But the workforce rate for similar-aged young women fell one point after 2009 and has since risen two points above the 2009 level. 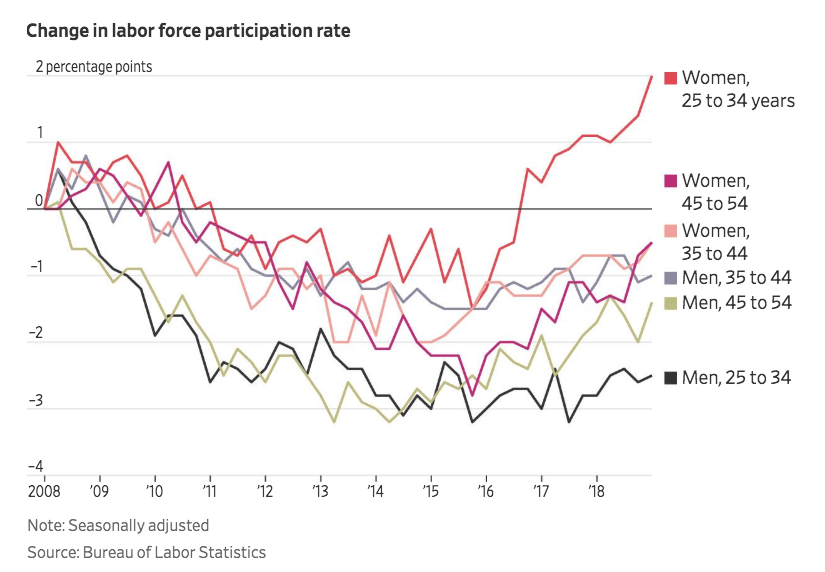 President Barack Obama’s chief economist says Washington is imposing the economic pain of five simultaneous recessions on less-educated Americans, thereby pushing millions of working-age men off jobs, out of the workforce, and into poverty.

Roughly ten percent of American “prime age” men, or seven million men aged 25 to 54, have dropped out of the nation’s workforce of 150 million. They are not trying to get jobs, and are not participating in the nation’s labor force.

“This [dropout] is caused by policies and institutions, not by technology,” admitted Jason Furman, an economist who chairs the president’s Council of Economic Advisors. “We shouldn’t accept it as inevitable,” he told a Brookings Institute expert, Dave Wessel on August 10.

Furman says low wages are the primary cause of the workforce shrinkage.

“The amount [of money] that employers would want to hire them for some reason has gone down. … That’s consistent with what we see in the states and in the aggregate,” Furman said.

The post-2o10 inflow of illegal fentanyl drugs worsened the legal drug crisis. But officials working for Obama largely ignored the rising disaster, according to a Washington Post article. In 2016, the Post reported:

The 11 [health] experts pressed the officials to declare fentanyl a national “public health emergency” that would put a laser-like focus on combating the emerging epidemic and warn the country about the threat, according to a copy of the letter.

But the federal government then imports about 1.1 million legal immigrants, refreshes a resident population of roughly 1.5 million white-collar guest workers, in addition to approximately 500,000 blue-collar visa workers, and also tolerates about eight million illegal workers and the inflow of hundreds of thousands of illegal migrants.

This federal policy of flooding the market with cheap white-collar graduates and blue-collar foreign labor is intended to boost economic growth for investors.

This policy works by shifting enormous wealth from young employees towards older investors, even as it also widens wealth gaps, reduces high-tech investment, increases state and local tax burdens, hurts children’s schools and college education, pushes Americans away from high-tech careers, and sidelines millions of marginalized Americans, including many who are now struggling with fentanyl addictions.