The Federal Reserve Bank of New York once again stepped into the money market to supply additional liquidity on Thursday morning.

The N.Y. Fed injected $75 billion into the market for overnight repurchase agreements, known as repos. The Fed had intervened in the market on Tuesday and Wednesday after interest rates spiked higher at the start of the week.

The repo market is at the center of the U.S. financial system but it is little understood even by most people working in finance.

Big Wall Street banks borrow cash to finance their securities portfolios by selling securities and promising to buy them back the following day. The cash comes from investors with lots of dollars looking to make a little extra interest, such as money-market funds and government-sponsored housing agencies such as Fannie Mae, Freddie Mac, and the Federal Home Loan bank. Typically, the interest rate on repos falls within the Fed’s target range for the fed funds rate, the rate banks pay to borrow reserves from each other.

Here’s how it works. Traders at the big Wall Street firms put in bids to borrow cash overnight and cash investors accept bids, typically striking deals by 10 a.m. The bids are promises to pay an interest rate and a pledge to post securities as collateral. After the market closes at the end of the day, the securities get allocated to the cash investors. The following day, at 8:30 in the morning, the repos get unwound. The cash investors get their cash back and the Wall Street banks get their securities back. Then it starts all over again.

Why do the big Wall Street banks fund themselves this way? It’s really just a more intense version of the basic model of banking: borrow short-term, lend long-term, and make your profit on the difference between the rates. In this case, however, the big banks are borrowing the cash overnight and using it to buy longer-term bonds paying higher rates of interest. If collateralizing a loan with securities that were purchased with the loan sounds strange just remember that this is not really that much different than how a car loan or a mortgage is collateralized. 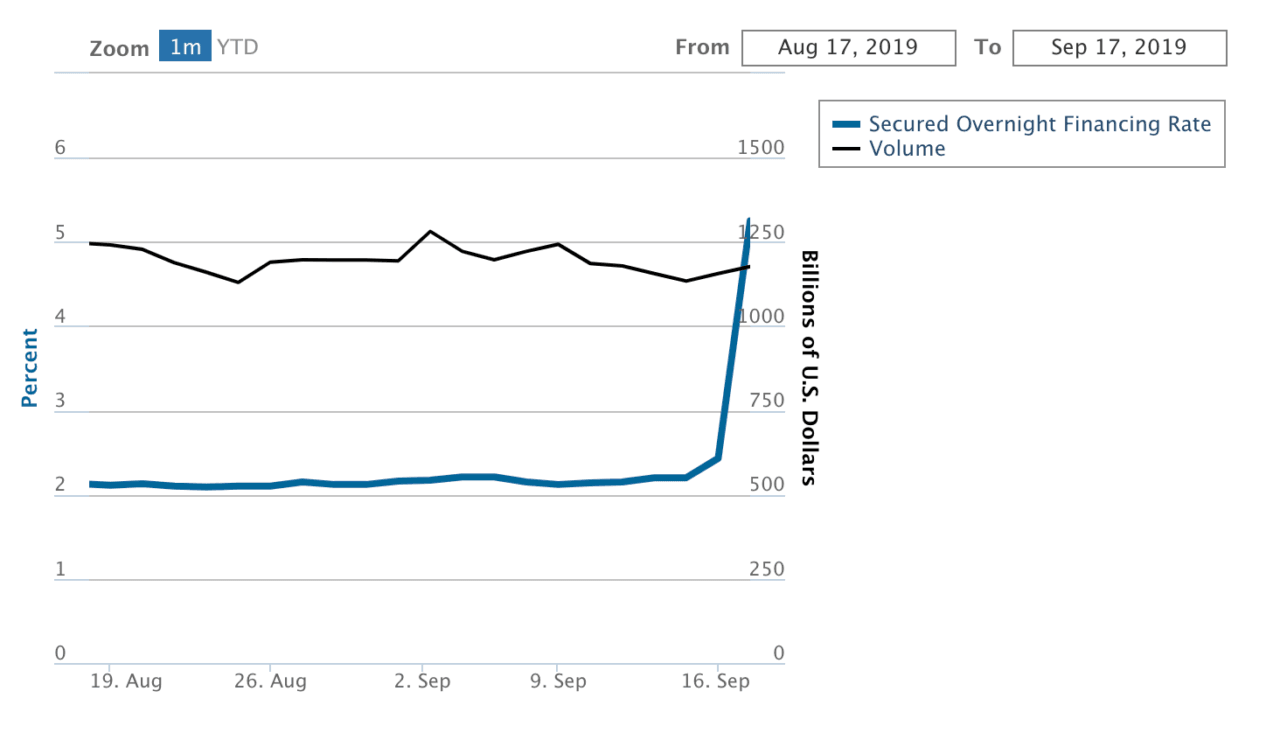 Usually, the repo process is nearly seamless. Most of the previous day’s trades just get rolled over into the next day’s repos, with a slight tinkering of the rates and slight shifts in the collateral.  But this week has been unusual.

The cause of the spike in rates is still a mystery. The theory now with the most currency (excuse the pun) on Wall Street is that the Fed, by unwinding its quantitative easing and shrinking its balance sheet, has removed too much liquidity from the financial system. If that is the source of the problem it would be ironic because the Fed has spent a good deal of time over the last few years worrying about how to conduct monetary policy in a world of “ample liquidity.”
No one looking at the repo market this week would characterize it as having ample liquidity.