President Joe Biden’s government is responding to its migration crisis by letting more into the country and by extracting additional migrants from Central America, according to a White House statement.

“This administration is working to establish lawful pathways for individuals to migrate or seek protection,” said the June 15 statement, titled, “Action the Biden-Harris Administration Has Taken to Address the Border Challenge.”

[…] announced the availability of 6,000 temporary, non-agricultural worker – or H-2B – visas for nationals of Honduras, El Salvador and Guatemala for FY 2021 … reopened the Central American Minors (CAM) program to reunite children who are nationals of El Salvador, Guatemala or Honduras with their parents in the U.S. …  resumed interviewing individuals via the Protection Transfer Arrangement (PTA) to expand protection for vulnerable nationals of El Salvador, Guatemala, and Honduras … [and] opened the first Migration Resource Center (MRC) in Guatemala to provide individuals with protection screenings and referrals to asylum, refugee resettlement, and parole options.

“The Biden administration is participating in predatory colonialism” to benefit U.S. employers and investors, said Rob Law, the director of regulatory affairs and policy for the Center for Immigration Studies. “They’re pilfering that population and then just dropping them off in the United States with a work permit,” he said.

The illegal delivery of workers and consumers to the U.S. economy drains the economies of Central America, he added. “They are extracting Central Americans who could be agents of [democratic] change in their home countries.”

The White House statement does not address migration’s damage to Americans’ opportunities, wages, rents, productivity, and political status. Instead, it reframes the chaotic migration as a threat to the migrants that can best be resolved by more federal support to the migrants.

So far, few GOP politicians have recognized the political and legal strategy behind the White House’s immigration strategy, which is led by Alejandro Mayorkas, the secretary of the Department of Homeland Security,

For example, at a June 17 hearing of the House’s Committee on Homeland Security, GOP members complained about the migration and quizzed Mayorkas about whether he had personally talked with border agents or visited the border — as if the would ensure Mayorkas would agree with them.

“I want to say that the situation at the border is a crisis of epic proportions,” said Rep. Austin Pfluger (R-TX). “When’s the last time that you talked to a Customs and Border Protection agent in the El Paso sector or the Rio Grande Valley or for any sector in Texas?”

“Mr. Secretary, those agents, are they saying the word ‘help’ to you? Because that’s what they’re saying to me,” Pfluger responded.

The leading GOP member of the panel, Rep. John Katko (R-NY), asked Mayorkas about diversity, cybersecurity, the increasing retirement of border agents, and Mayorkas’ plans to visit the border.

In March, business-backed pro-migration groups help to spend $200,000 on a campaign ad in Katko’s district. 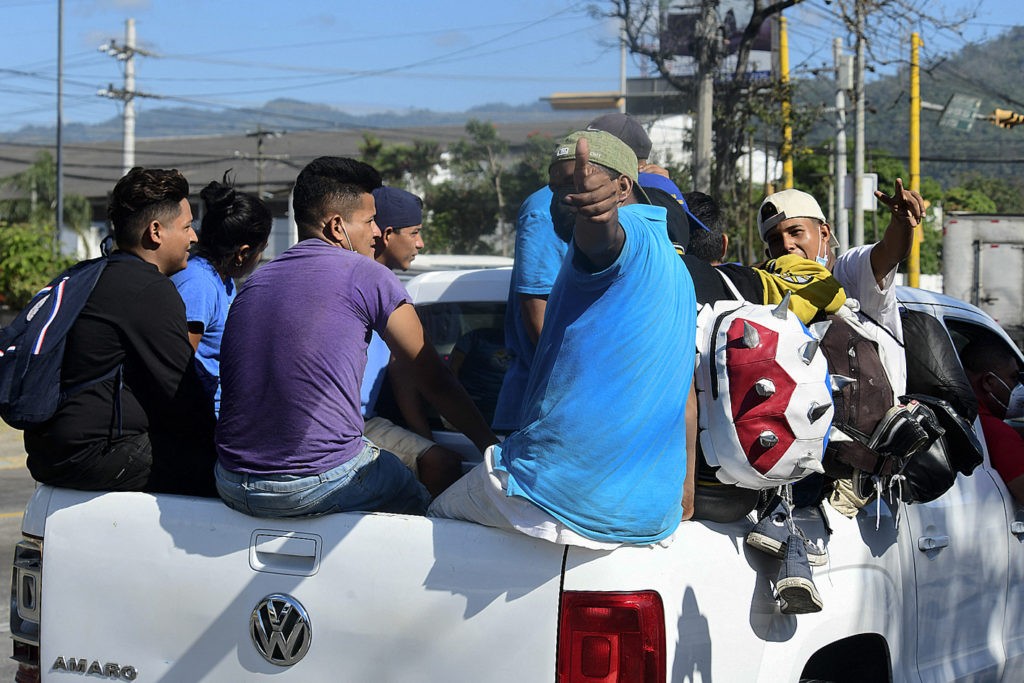 Migrants gesture from a pick-up truck while riding along a road in Choloma, Cortes department, Honduras as they take part in a caravan to Corinto, in the border with Guatemala, on their way to the US. (WENDELL ESCOTO/AFP via Getty Images)

In contrast, the Republican Study Committee posted a policy memo on April 14 which urged Republicans to defend working Americans from the government’s extraction-migration policies.

“We believe U.S. immigration policy should be designed to primarily serve the interest of American citizens, families, and workers …Immigration policy should prioritize American workers, help grow our middle class, raise wages, and enhance economic opportunity for all lawful residents,” said the statement from the committee, which is headed by Rep. Jim Banks (R-IN).

Federal law protects working Americans and their families by barring corporate hiring of aliens, yet the administration is shuttling many thousands of foreigners into the U.S. labor force, Law said.

“This recruitment of economic migrants is really an affront to American workers, and it is a complete disregard for our immigration laws,” he said.

Section 1324a in the 1965 immigration law bars the “Unlawful employment of aliens,” saying “It is unlawful for a person or other entity- (A) to hire, or to recruit or refer for a fee, for employment in the United States an alien knowing the alien is an unauthorized alien.”

For many years, a wide variety of pollsters have shown deep and broad opposition to the labor migration and the temporary contract favored by business groups. This opposition is multiracial, cross-sex, non-racist, class-based, bipartisan, rational, persistent because it stands on the normal solidarity Americans owe to each other.

To justify their award of work permits, the administration is stretching the law, Law said, adding:

They’re citing the law, saying that they’re creating legal channels and legal pathways, but there is no actual legal basis for what they are doing. They’re just making it up as they go along […]  They’re implementing a system that they wish the law was, as opposed to actually following the laws as passed by Congress.

For example, Mayorkas is using his “parole” authority to invite many lawfully deported migrants back into the United States and to invite many thousands of the left-behind children of economic migrants to join their parents in the United States. But according to the Cornell Law School, “the parole of aliens … would generally be justified only on a case-by-case basis for ‘urgent humanitarian reasons’ or ‘significant public benefit,’ provided the aliens present neither a security risk nor a risk of absconding.”

“That’s a very narrow authority,” said Law. “How in the world is it a ‘significant public benefit’ for this country and our citizens to basically allow economic migrants into the country to take jobs from Americans?”

Similarly, the administration’s centers in Central American are offering asylum to young workers people who can walk up to the U.S. embassy to claim persecution, he said. “If it is safe enough for you to be in your home country and to go to a United States government office to submit paperwork, you are clearly not being persecuted,” he said.

HHS has surged case management resources to dramatically increase the rates by which children [and youths] are united with their sponsors.

The President issued a new FY 2021 Presidential Determination on refugees that created 4,000 additional slots for refugees from Latin America and the Caribbean, which includes the Northern Triangle.

Mayorkas is using his bureaucratic and regulatory powers to open more doorways through the border for foreign workers.

Mayorkas is also using his parole power to invite lawfully deported migrants to rejoin their left-behind migrant children who are applying for asylum. In addition, he is using the U Visa program to provide work permits and Social Security Numbers to migrants who say they were victimized by a crime in the United States.

The Department of Justice is also revising asylum rules so Mayorkas’s deputies can offer citizenship to migrants who claim their home-country governments do not protect them from spousal abuse or routine crime.

The deep public opposition to labor migration is built on the widespread recognition legal and illegal migration moves money away from most Americans’ pocketbooks and families.

Administration officials and their backers in business “would like to extract much of the entirety of Central America and drop them into the United States for economic purposes,” said Law.

But that extraction “will permanently destroy those Central American countries,” he added.  It “is harmful to those home countries because there’s no accountability, so there’ll never be any change so that corruption and poverty will continue.”