“It is absolutely absurd that Americans are paying contractors to guard [purchased] metal gates that President Biden refuses to install because he wants to ‘study’ the wall,” said Sen. James Lankford (R-OK), the main author of the report.

The July 21 report, titled “President Biden is Wasting Billions by Not Building the Border Wall,” says:

The anti-wall, pro-migration deputies are also burning the $1.9 billion of unspent construction funds that were formally appropriated to the Department of Homeland Security (DHS), the report noted. The waste comes because contractors are paid to sit idle instead of completing the installation of already purchased steel and concrete:

On January 20, 2021, President Biden ordered his Administration to “study” the border wall construction for 60 days and report back to him with recommendations. It has been 180 days since the 60-day study commenced. As of the drafting of this report, no study findings have been released by DHS or the Biden Administration. With costs continuing to increase to not construct the border wall or install the infrastructure’s technology, it is essential for the public to have access to the findings, data, and methodology of the Biden Administration’s border wall study.

Lankford is the senior Republican on the government operations subcommittee of the Homeland Security and Governmental Affairs Committee.

GOP Senators also argue that Biden is also breaking federal law by refusing to spend the money that Congress appropriated for wall building. So far, however, GOP legislators have not made any public moves to penalize Biden or congressional Democrats for violating the federal law.

The deliberate waste of taxpayer funds by DHS chief Alejandro Mayorkas comes after years of complaints by Democrats that Trump’s border wall would waste taxpayer money.

“Building a massive wall … is a waste of money,” President Biden said on his first day in office.

“Constructing a wall at the Southern border is an ineffective waste of taxpayer money and will do nothing to advance our national security,” Democratic leader Sen. Chuck Schumer (D-NY) declared in September 2019.

Trump’s wall is “a wasteful, ineffective wall,” the Democrats’ leader in the House, Rep. Nancy Pelosi, said in July 2019. 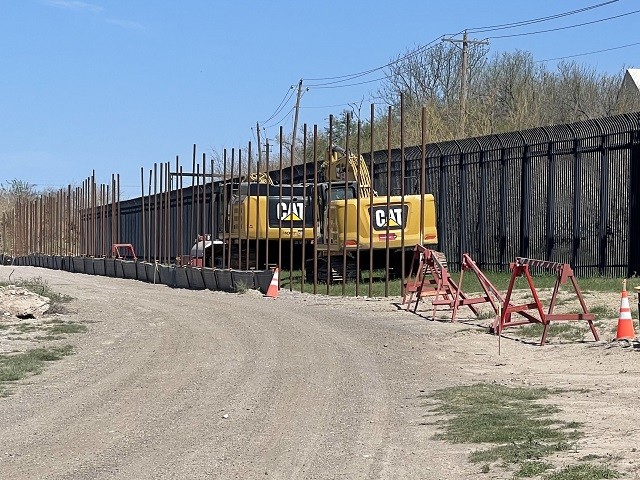 Since Biden’s inauguration, Mayorkas and other deputies have allowed roughly 500,000 migrants to enter the United States via the southern border. Many have sneaked through gaps in the half-built wall, but roughly two-thirds have walked in through various legal loopholes and side-doors that Mayorkas is opening in the border.

By itself, the wall cannot stop determined, desperate, and tough migrants, especially when the migrants are aided by employer-funded U.S. lawyers and lax government policies.

But under Trump, the wall helped border agents efficiently enforce the nation’s pro-American immigration laws and regulations. In turn, the reduced inflow of migrants saved billions on welfare spending and also helped shift more company revenues back to wages for working Americans.

That was a big change from prior years when government and business leaders had only pretended to enforce border security. The border pretense helped them hide their determination to extract consumers, renters, and workers from poor countries for use by employers and investors in the U.S. economy. President Biden has revived and extended the business-backed policy of border theater.

The federal delivery of labor also helps to move wealth — and social status — from heartland red states to the coastal blue states and from the rural districts to the urban districts within each state. In Lankford’s Oklahoma, or in the upstate district held by Rep. John Katko (R-NY), the inflow of migrants skews investment and wealth towards the major cities.

Many Republicans legislators quietly support this transfer of wealth from employees to employers, even as they theatrically, repeatedly, and loudly denounce loose borders.

In September 2017, Lankford told a D.C. press conference that he favored the continued presence of ‘DACA’ workers in the U.S. economy:

The job issue is an interesting issue, because those individuals are already in the job market. Many of these DACA students are actually DACA young adults, they already have access to the job market right now because they’ve been given deferred action. … That continual competition in our economy doesn’t hurt us, that continues to help us. It actually hurts us to put those individuals out of the economy.

On June 16, a federal judge struck down the DACA program because it violates the laws protecting Americans’ right to earn decent wages in their national labor market.

“Even Defendants-Intervenors’ own experts could not escape the reality that DACA [Deferred Action for Childhood Arrivals] congests the workforce,” wrote Judge Andrew Hanen of the United States District Court in Houston. The pro-DACA legal team admitted that “[W]ork authorizations and deferral from deportation provided by DACA allow recipients to better compete with legally present workers,” Hanen wrote on page 19 of the July 16, 77-page decision.