After publicly urging Democrats to put a “pause” on President Joe Biden’s $3.5 trillion spending bill, Sen. Joe Manchin (D-WV) has reportedly said in private he will only support a $1 trillion price tag.

“Sen. Joe Manchin (D-W.V.) has privately warned the White House and congressional leaders that he has specific policy concerns with President Biden’s $3.5 trillion social spending dream — and he’ll support as little as $1 trillion of it,” reported Axios on Tuesday hours after President Biden expressed hope that he can reach a deal with the senator.

“At most, he’s open to supporting $1.5 trillion, sources familiar with the discussions say,” the report added.

Given the 50-50 split in the U.S. Senate, Joe Manchin’s alleged refusal to support President Biden’s bill would mean be a serious blow to a variety of initiatives progressives hoped to attach to the bill.

“Manchin also has committed to paying for any new spending with new revenue, which will limit the ultimate size of any final package,” continued Axios. “This amount would be on top of a $1.2 trillion bipartisan infrastructure deal passed by the Senate and awaiting House action.” 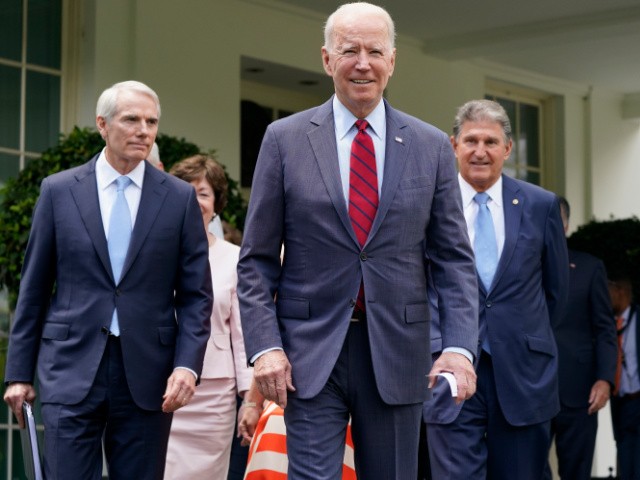 Speaking at the White House Tuesday evening after returning from his visits to New York and New Jersey to survey the damage from Hurricane Ida, President Biden said he looks forward to coming to an agreement with Manchin.

“Joe at the end has always been there,” said Biden. “He’s always been with me. I think we can work something out. I look forward to speaking with him.”

In his op-ed for the Wall Street Journal last week, Manchin argued the “overheating economy” just cannot endure another round of trillion-dollar spending without a clearer plan for the rocky future ahead:

Instead of rushing to spend trillions on new government programs and additional stimulus funding, Congress should hit a strategic pause on the budget-reconciliation legislation. A pause is warranted because it will provide more clarity on the trajectory of the pandemic, and it will allow us to determine whether inflation is transitory or not. While some have suggested this reconciliation legislation must be passed now, I believe that making budgetary decisions under artificial political deadlines never leads to good policy or sound decisions. I have always said if I can’t explain it, I can’t vote for it, and I can’t explain why my Democratic colleagues are rushing to spend $3.5 trillion.

Another reason to pause: We must allow for a complete reporting and analysis of the implications a multitrillion-dollar bill will have for this generation and the next. Such a strategic pause will allow every member of Congress to use the transparent committee process to debate: What should we fund, and what can we simply not afford?

One Democratic source told Axios on Tuesday that Sen. Bernie Sanders (I-VT), whose budget committee worked on the bill, will be negotiating with Manchin to find “common ground.”

“Sanderswanted a large number and Manchin wants a smaller number and we’re going to work this process to try to reach common ground,” the source said. “There is a wide spectrum of opinions in the Democratic caucuses, and plenty of negotiation will take place. But we will continue to get this done, finding common ground.”

As noted by the New York Post, House Speaker Nancy Pelosi (D-CA) will hold on moving forward with the $1.2 trillion infrastructure bill that recently passed in the U.S. Senate until the upper chamber also passes the $3.5 trillion reconciliation package.

“She has also promised moderate members of her conference that a vote on the smaller legislation will come by Sept. 27,” reported the Post.