Migrant Haitians are drowning in the Atlantic, and it is Americans’ fault, says Reason magazine, a libertarian publication.

The Miami Herald reports that five boats of undocumented Haitian migrants have reached the Florida Keys since November. While others reach Puerto Rico, most are intercepted in the water—and many drown, undetected. A boat trying to reach the U.S. in May capsized, resulting in the deaths of 11 Haitian women. Another vessel carrying two dozen Haitians bound for the U.S. has been missing since March.

“Shutting down safe and legal migration options won’t prevent truly desperate Haitians from attempting to escape danger, but reopening them can help prevent deadly journeys,” the article declares, which was posted as progressives complained about the forced return of some Haitian illegal migrants back to their home country.

“Significant numbers of people are losing their lives because the administration is luring them to take these foolish risks,” responded Mark Krikorian, the director of the Center for Immigration Studies. 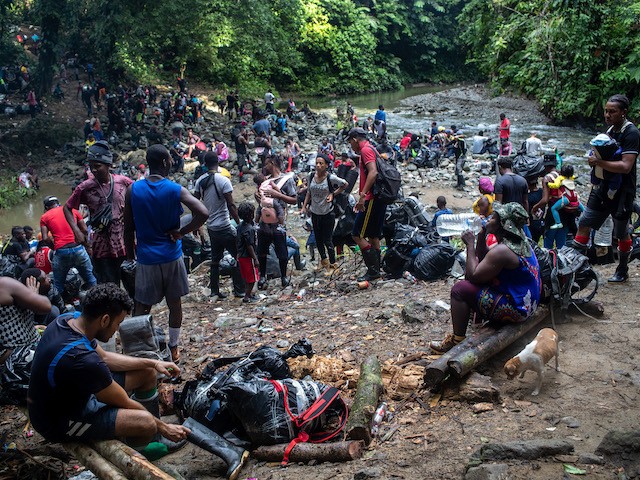 Migrants, mostly from Haiti, pause for a rest on their trek through the infamous Darien Gap on their journey towards the United States on October 05, 2021, near Acandi, Colombia. (John Moore/Getty Images)

President Joe Biden’s dangled offer of a welcome is encouraging more migrants to risk their lives at sea, in rivers, deserts, and in jungles, such as the Darien Gap trail between Colombia and Panama, Krikorian said.

“I have no idea what the numbers are,” he said, adding, “Somebody ought to count, but it’s not like anybody in this administration is interested in knowing what the actual count is.”

One report by the United Nation’s International Organization for Migration estimated 650 deaths on the U.S. border in 2021. That estimate excludes potentially many more deaths from further south on the trail and the many additional deaths caused by illegal migrants in the United States.

Progressives refuse to be shamed by the tragic death toll of their pro-migration policies, Krikorian said:

They should be, but the won’t be [ashamed] because they see [the death toll] as an emotional club, a political weapon, to be used against those who think that America matters. Wasn’t it Stalin who said, “You know, you’ve got to break a few eggs to make an omelet.” He’s their guy, and this is the same perspective.

For example, Aaron Reichlin-Melnick is a pro-migration advocate with the American Immigration Council. He blames migrants’ deaths on Americans’ wish to defend their country and culture instead of converting their homeland into a so-called “Beacon of Freedom”:

30 years of "Prevention Through Deterrence" has shown that making it harder to cross the border leads to only a small deterrent effect and a massive increase in deaths. And the last 10 years of asylum issues show that it's push factors driving migration, not pull factors.

Another immigration restriction death. Nurse dies in the border desert… during a health care shortage https://t.co/DdASbLEGC5

Some pro-migration groups count the deaths, usually with the purpose of demanding easier migration rules:

🚨 With more than 15,000 documented migrant deaths, efforts to provide a meaningful response to this ongoing human tragedy cannot be postponed any further.

Our call: Act now to save lives and prevent migrants from going missing.

Americans need to exclude waves of illegal migrants from their society, Krikorian said. Americans’ cultural balance of freedom and prosperity is not something other cultures were able to create and adopt, he noted:

The kind of acceptance of other views that lead to stability and political prosperity doesn’t just happen. That’s a manifestation of our particular culture, our history, our inheritance from England. It’s something that has to be nurtured and protected and promoted, and it doesn’t exist everywhere. Haiti is Exhibit One for the contention that this healthy civic environment is not something that just automatically happens.

Uncontrolled migration also skews the U.S. economy in favor of investors and employers, tilts job-creating investment towards coastal cities, deters high-tech investment in many industries, and encourages elite disregard for the civic problems of ordinary Americans.