Thousands of migrants die as they walk through the Panama jungle to reach President Joe Biden’s half-open border, says Michael Yon, a veteran American journalist who interviewed many migrants on the deadly trail through the Darien Gap.

“There’s more vultures out there than I’ve seen in anywhere in the world,” Yon told a December 7 meeting arranged by the Center for Immigration Studies. He continued:

But after being down there for months, and interviewing just tons of people — hundreds — I’m going to guess 10 percent die out there. And if 100,000 people came through this year, that’s 10,000 people [dead].

So you can imagine how much those vultures have to eat. And I’m not sure if that’s why the vultures are there. But it’s a strange amount of vultures.

Yon described a conversation with a Cuban migrant on the trail:

One man I call him “22 Days” His Cuban wife had left him as soon as [Hoe] Biden became president. She struck off for America and he followed her from Ecuador. And he’s stuck out there [on the trail]. He got left behind. And she left him behind. She made it to Texas, by the way, and left him and he was out there dying in the jungle. And he said the mosquitoes were so bad he was using his wife’s perfume to to keep them off. I was like, “This is like out of a movie.” He’s like “Yes, yes, a bad, very bad movie. The black birds were landing around me, you know, and my wife, she left me in the jungle. And you know, the big black birds, you know, the ones that eat the flesh?”

There’s more vultures out there than I’ve seen in anywhere in the world.

Much of the migration is aided by “pumping stations” run by the United Nation’s International Organization for Migration, Rep. Tom Tiffany (R-WI) told the panel.

The northward flow is kept at a steady level by Panama and Columbia, so avoiding a deadly traffic jam of migrants going through the jungle.

In recent months, Mexico has used its control of the final approaches to the U.S. border to press for valuable concessions from Biden’s deputies. 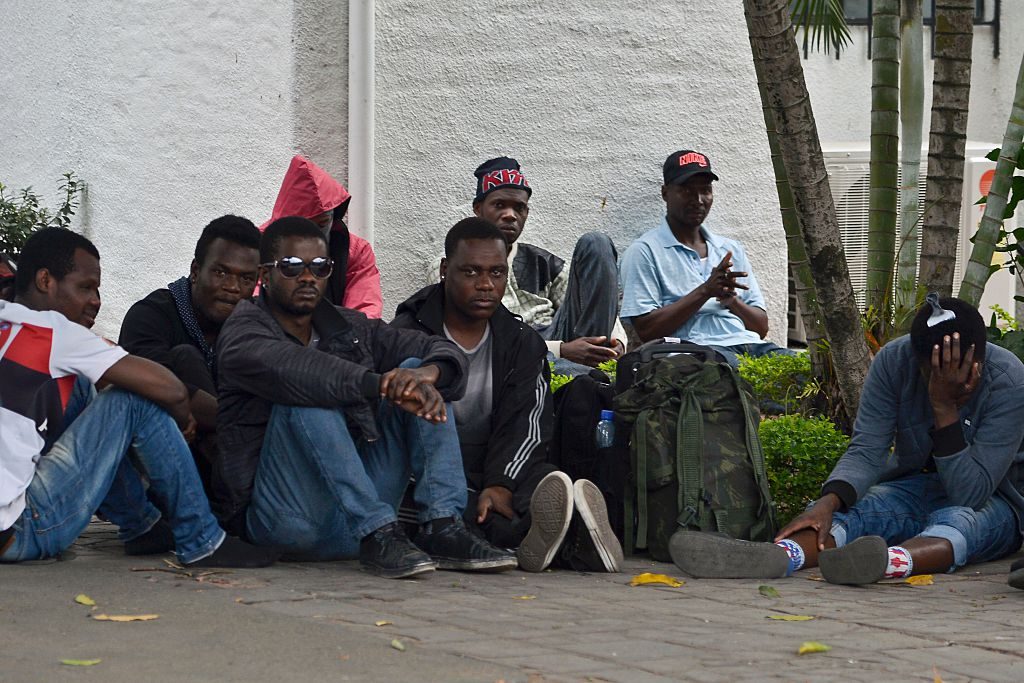 Haitian migrants rest as they continue their way towards to the Panama jungle and on to the United States. (LUIS ROBAYO/AFP via Getty Images)

The deputies want Mexico to manage the border flow because Biden’s left-wing allies oppose the stringent border controls that would prevent migrants from risking — and losing — their lives in the jungle.

The death toll is encouraged by President Joe Biden’s pro-migration border officials who insist that everyone in the world has the legal right to ask for asylum, no matter how weak their legal case.

For example, Alejandro Mayorkas is Biden’s secretary at the Department of Homeland Security. He is a Cuban immigrant and a pro-migration zealot.

In a November Senate hearing, for example, Sen. Tom Cotton (R-AR) asked him: “What should be a higher priority of the United States Government? Securing our border or giving amnesty to illegal aliens who are already here?”

“Justice is our priority,” Mayorkas responded, adding “That includes securing our border and providing relief to those [migrants] who qualify for it under our laws.” 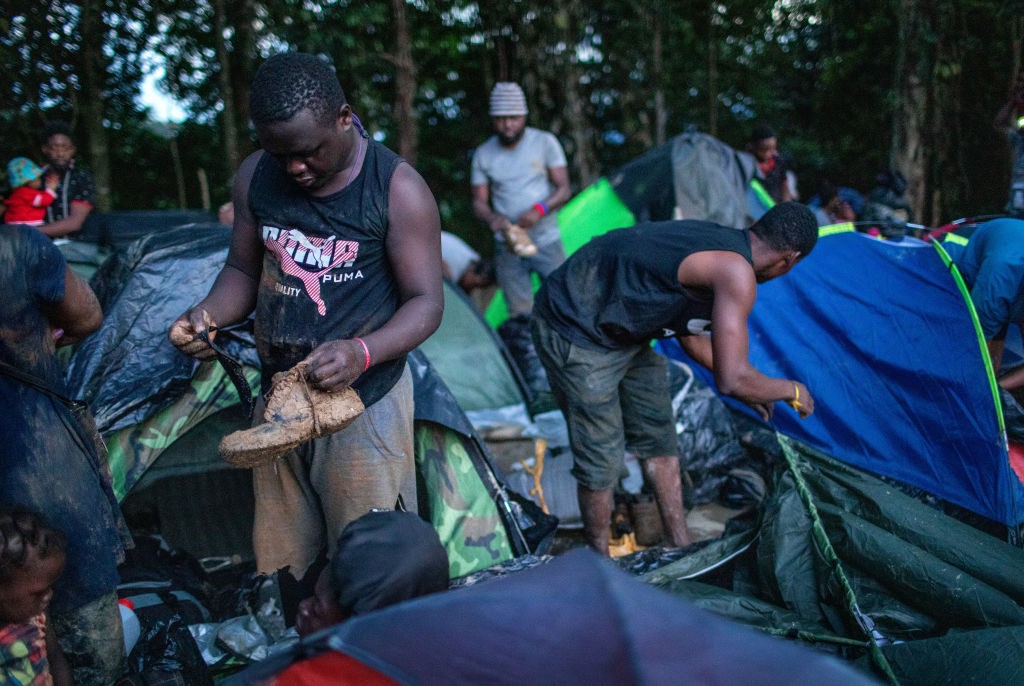 Haitian immigrants break camp near Colombia’s border with Panama before the second day of their trek on October 19, 2021 through the Darien Gap, Colombia. (John Moore/Getty Images) 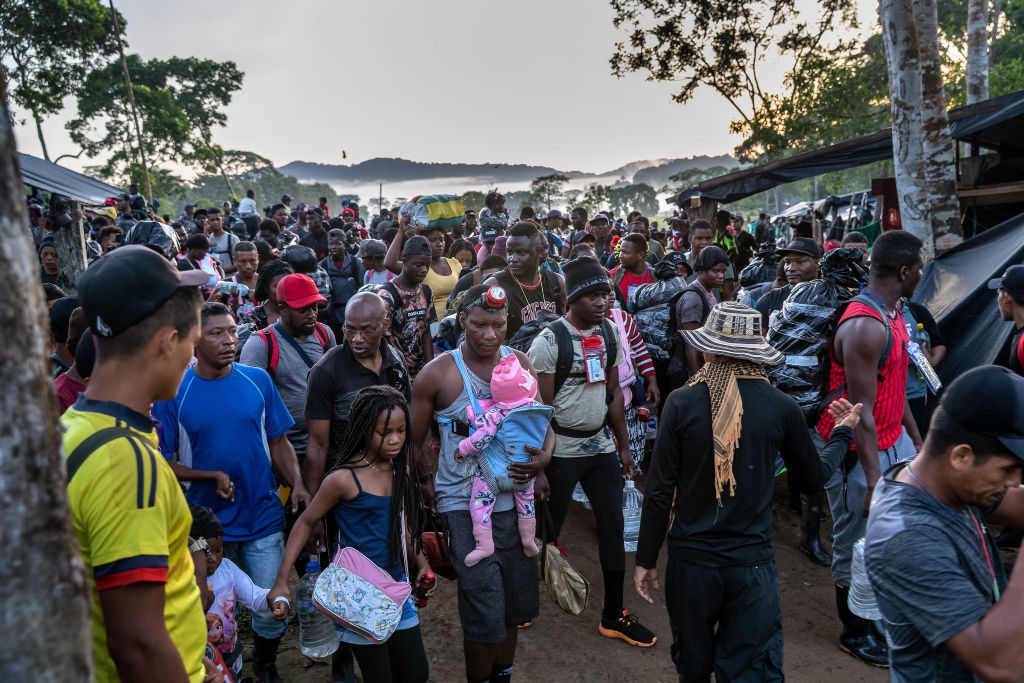 Migrants, most from Haiti, depart a base camp towards the jungle in the infamous Darien Gap while on their journey towards the United States on October 07, 2021 at Las Tekas, Colombia. (John Moore/Getty Images)

The federal government’s support for migration is an economic policy. It moves wealth from employees to employers, from families to investors, from young to old, from children to their parents, from homebuyers to investors, from technology to stoop labor.

The extraction migration pulls young people from poor countries and settles them in the major coastal states. That population shift moves wealth from heartland red states to the coastal blue states, and within large states, it also helps move wealth and status from GOP rural districts to Democrat cities.