ASHBURN, Virginia — Republican Glenn Youngkin, who is running for governor, announced Wednesday night the opening phase of his proposed education plan in Loudoun County, a location he described as “ground zero” for Critical Race Theory (CRT).

Youngkin rolled out the first of what he said would be three phases of his plan to a crowd of a couple hundred attendees in front of the Loudoun County Public Schools Administrative Building, centering his first phase around “restoring standards.”

“No more lowering expectations when our children should be aiming for the stars,” Youngkin said. “Access to quality education is the civil rights issue of our time, and I refuse to allow our children to be sentenced to a lifetime of mediocrity.”

The Virginia Republican bashed his opponent, former Gov. Terry McAuliffe (D), for changing school accreditation criteria and lowering math proficiency standards while he was serving as governor, citing various lower national academic rankings — like a drop in Virginia’s score with the Nation’s Report Card — as evidence that McAuliffe’s education policies were ineffective. “When we set lower standard is it any surprise that we get declining results?” Youngkin asked the crowd.

“On day one, I will sign an executive order returning Virginia’s schools to pre-McAuliffe standards. No longer will Virginia race to the bottom when it comes to expectations,” he vowed. 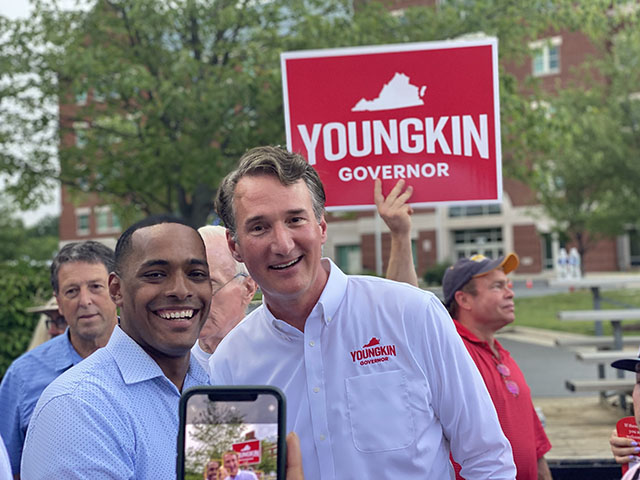 The Virginia Republican also assured the crowd he would make new appointments to key positions within the Department of Education. “I hope the state superintendent is still there when I take office so that I can escort him to the door,” Youngkin quipped.

His last component of phase one, which drew the loudest reaction from the rallygoers, was about CRT, a topic that has roiled public school systems nationwide, especially in Loudoun County where ongoing protests by parents against divisive race-based curricula and transgender-related policies have gained national attention.

“I want to make sure everybody hears this. On day one, I will issue an order banning the teaching of Critical Race Theory in our schools,” Youngkin announced as attendees erupted with applause. “Virginia’s future, our future will be made better together as opposed to divided. We know this.”

Present at the event were members of Parents Against Critical Theory (PACT), a group that opposes the teaching of CRT, as well as lieutenant governor candidate Winsome Sears, Fight for Schools Executive Director Ian Prior, representatives urging to recall school board members, and more.

One parent, Hunt McMahon, who told Breitbart News he has lived in Loudoun since the ’90s, donned a shirt to the event that said “teach free speech” on the front and “free Tanner” on the back. Tanner is a reference to Loudoun County gym teacher Byron “Tanner” Cross, who was suspended after he opposed a policy in May requiring teachers to honor children’s claims that they are transgender. Cross was temporarily reinstated to his job through a court order in June. 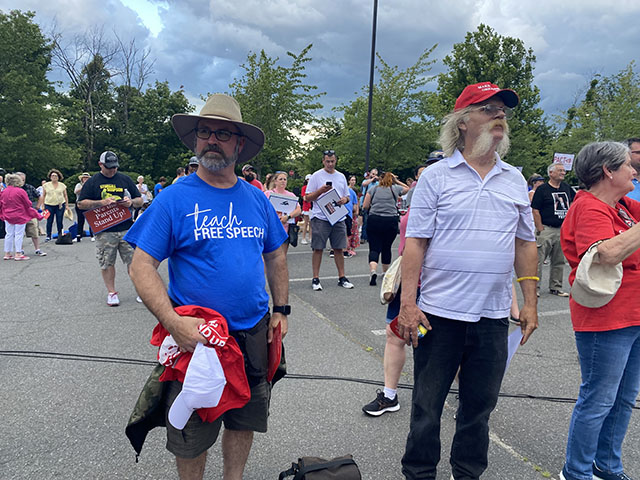 McMahon told Breitbart News, “We have to change the direction of Loudoun County Public Schools because they’re going down the toilet.” He added that “a lot of teachers are pushing agendas that are unrelated to what they’re supposed to be teaching.”

One reporter asked Youngkin after the event if he believed schools could teach CRT while also teaching about the criticisms of it.

“I actually think that Critical Race Theory is a political agenda as opposed to an academic curriculum, so we have to replace it with something else,” Youngkin replied. “I think the 1776 curriculum is a good curriculum. It’s actually fact-based. It teaches the bad and the good. It actually is quite transparent.”

McAuliffe, who has the backing of the nation’s largest teachers’ unions, was caught on tape in June dismissing CRT as a “another right-wing conspiracy.” He said, “This is totally made up by Donald Trump and Glenn Youngkin. This is who they are. It’s a conspiracy theory.”