Patients and staff from Brooke Army Medical Center in San Antonio, Texas received a special visit from American Sniper actor and Academy Award nominee Bradley Cooper Jan. 14 as they previewed the film two days ahead of its nationwide release.

As American Sniper made its debut in the medical center’s auditorium, Cooper was in another wing of the hospital, quietly visiting patients and staff while passing out autographed T-shirts and movie posters.

Upon surprising fans in the auditorium after the screening, Cooper was met with a spirited reception.

According to BAMC, a Marine in the audience stood up following a screening of the film and emotionally thanked Cooper for his genuine portrayal of the fallen hero. “I feel like you are one of my brothers,” he said. “I think you did really well and I just want to say ‘Thank you.’” 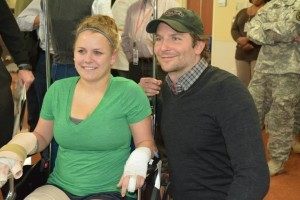 Chris Kyle’s father, Wayne, and veterans Bryan Anderson and Jacob Schick, who also appeared in the film, joined Cooper at the special event.

“I know when Bradley walked in you all were cheering wildly for him, but it’s us who needs to be cheering for y’all,” said Wayne Kyle. “I’m not here for [Bradley Cooper], I came here to see y’all.”

Cooper then engaged the audience members in a Q&A session about his preparation for the role of Chris Kyle, saying, “Making this movie was a life-changing experience,” he said. “I was terrified when I started. I didn’t know if I could actually get to a place where I would believe that I was Chris [Kyle].” 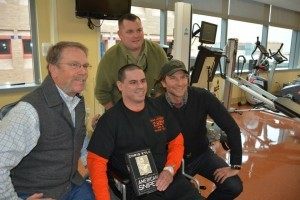 “It was actually Wayne Kyle’s idea,” Cooper told fans of the surprise visit. “You have done so much for all the vets, it’s the least we could do is come here and meet you guys.”

Cooper reportedly left the question and answer session and stopped by an inpatient ward to visit an amputee veteran to sign more autographs.

Roughly 260 service members and hospital staff were invited to preview the film, which has since shattered box-office records.

Cooper also delivered an additional video message to all service members in an interview with All Hands magazine on Jan 15.