Devout feminist Sarah Silverman is at it again on social media, this time sparking outrage on Twitter for posting a list of “10 Rape Prevention Tips,” which alot of users haven’t found funny.

Silverman’s tip list not only paints all men as potential rapists, according to some, but also insinuates that only females can be victims of sexual assault.

The comedienne posted a graphic image, directed specifically to men, with phrases such as “Don’t put drugs in women’s drinks,” and “If you are in an elevator and a woman gets in, don’t rape her.”

These are great- send to all the men in ur life RT @texpatriate 10 Rape Prevention Tips. @lizzwinstead pic.twitter.com/IPfWsaz9zz

Silverman is now the one being accused of impropriety:

“jesus christ wtf is this. not everybody out here raping bitches wats wrong with you,” asked one user.

“This is so offensive to men. What an awful subtext your propagating,” wrote a commentator. “I feel like battling sexism with sexist propaganda is the best way to promote sexism,” said another.

The negative commentary didn’t end there, as many posited that men are vulnerable to sexual abuse, too.

“But when it comes to rape & violence against women there’s a negative stereotype some folks try to blanket on “the men,” said Zac Lee. “When u make a parody on that article & focus it on ‘men’, it’s implicitly demonizing all men as sexual predators.”

“‘We” don’t want anything except for men to stop being demonized by ignorant hags like @SarahKSilverman,” wrote Femibuster. “Western feminism is, and should be, dead.”

“Not ‘funny’ to blame all men. Id rather take assault on women seriously,” said Karen Percivalsmum.

A 2011 survey released by The Center for Disease Control revealed that 19.3% of women have been raped at least once in their lives and an estimated 2% of men reported at least one rape in the span of their lifetime.

Consistent with previous studies, the overall pattern of results suggest that women, in particular, are heavily impacted over their lifetime. However, the results also indicate that many men experience sexual violence, stalking, and, in particular, physical violence by an intimate partner. 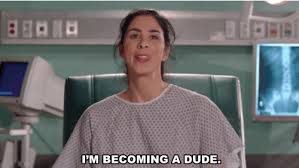