Thompson and Sarkeesian have been viewed by many as an example of how the political spectrum comes full circle, with radicals on both the far-left and far-right intersecting on authoritarian censorship of culture.

When asked about censoring video games, Thompson replied, “I’m opposed to censorship, which is prior restraint, which is unconstitutional in our country. All I have ever tried to do regarding GTA (Grand Theft Auto) or any other age-rated game is get the industry to abide by the age ratings. That is the way it works in the UK. That is all I have tried to do here.”

But alongside “abide by,” Thompson could have added “change.” In the past, the activist has called for games like Grand Theft Auto III: San Andreas and Killer 7 to be re-rated “Adults Only” (AO) instead of “Mature” (M). Whether Thompson realizes it or not, this reclassification is backdoor censorship for video games, as retailers are extremely reluctant to sell games with the “AO” label. Comparing the rating systems for video games and movies shows why. 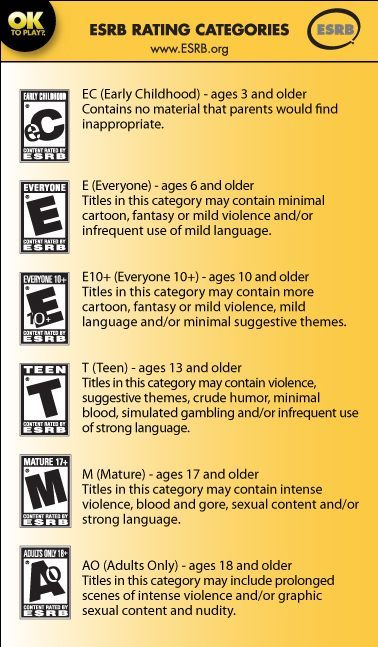 Many popular Hollywood blockbusters, such as The Hangover (2009) and American Sniper (2014) are packed with violence and sexual content and assigned the “R” rating. Similarly, top-selling video games like the Call of Duty and BioShock franchises are rated “M.” Both ratings essentially say that the media text should not be experienced by those under the age of 17. Both ratings have become the accepted standards in America for identifying adult material.

Both the MPAA and ESRB have ratings that permit only adults to experience content: “NC-17” and “AO.” But think about it: when was the last time you saw an “NC-17” movie? Played an AO-rated game? Never? Even if you have seen or played an adults-only film or game, I can almost assure you it wasn’t a financially successful one.

By saying a film or game is for 18 and up instead of 17 and up, ratings boards effectively punt this media out of the market. When the ESRB changed the rating on Grand Theft Auto III: San Andreas from “M” to “AO,” Target, Walmart, GameStop, and other big retailers pulled the game from their shelves; the developer lost $28.8 million during that fiscal quarter.

Thompson apparently justifies this market destruction by stating that “teen brains are neurobiologically different than adult” ones. The activist states that “the brain scan studies at Indiana University and Harvard that show violent entertainment is consumed in a different part of the brain in young people than in adults–the party [sic] that leads to copycatting. It’s simple neuroscience.”

When pointed to contradicting research conducted by Associate Professor Christopher J. Ferguson, who has guest edited for an American Psychological Association magazine issue involving mental health and video games, and asked if “we need to consider different research models before drawing conclusions,” Thompson simply said “the science is settled,” without elaborating or providing a rebuttal to Ferguson’s work.

Similarly, when asked what he thought about a study showing that playing violent video games could reduce real-life violence by allowing gamers to “blow off steam,” Thompson responded “bull crap.” The activist’s abrupt dismissal of research that is not in favor of his view, instead of logically arguing the issue, is reminiscent of Sarkeesian’s own refusal to debate those who disagree with her (even when offered $10,000 to donate to a charity of her choice). This construction of an echo chamber in which only one point of view is disseminated and received is not conducive to the public sphere of debate on which Western democracy has thrived.

On Anita Sarkeesian, Thompson said, “She’s liberal politically. I am a conservative. She also is all bent out of shape about female stereotyping. Not a big problem when it comes to the more grotesque consequences of kids consuming games. She also tries to curry favor from the industry, as if she were some kind of flirt, speaking of stereotypes. If you are fighting with an industry, you don’t accept their awards and try to be some sort of heroine to that industry. Pathetic, really. She’s not a warrior on the issue. She’s a self-promoter, and I think everyone has pretty much figured that out.”

Thompson also addressed the Supreme Court’s 2011 ruling that California could not ban the sale of violent games to children. He said “Justice Scalia, who wrote the opinion, has been a libertarian whacko. He said there is no evidence that games have any harmful effects on young people. I think he must have consumed the evidence in a medical marijuana case before he wrote that opinion. He is out of his mind on that issue.”