Multiple League of Legends players in the North American, European, and Oceanic regions were surprised to log into their game and find that their names had been changed without consultation.

For each of them, a corresponding e-mail had been sent from developer Riot Games explaining that as their “summoner name was found to be in violation of our Terms of Use, we have changed it to something that is more in line with what we deem is acceptable.”

Part of the optional process to be allowed to have the name changed to something else was to complete a survey. Riot Games issuing surveys to their players is nothing out of the ordinary, but the contents of this survey in particular asked questions trying to determine sensitive personal information.

One player who forwarded Breitbart the e-mail and two screenshots of the survey told us, “it was like a psychology test you’d give to someone who had some depressive issue or something.”

The players were invited to answer a series of either/or questions about their mental state. Options include statements such as, “When people compliment me I sometimes get embarrassed,” “I like to be the centre of attention,” and, “I think I am a special person.”

Even more bizarrely, this was followed by a request for the player to divulge the number of times they had got into physical altercations in the last week. “I got into a physical fight because I was angry,” reads one statement, with the respondent having the option to choose up to six times. Most alarmingly, the way many of the questions are worded, it seems that they have schoolchildren in mind. It is certainly hard to imagine a scenario where a functioning adult could be in a situation where they have “slapped or kicked someone” multiple times over the course of a working week. 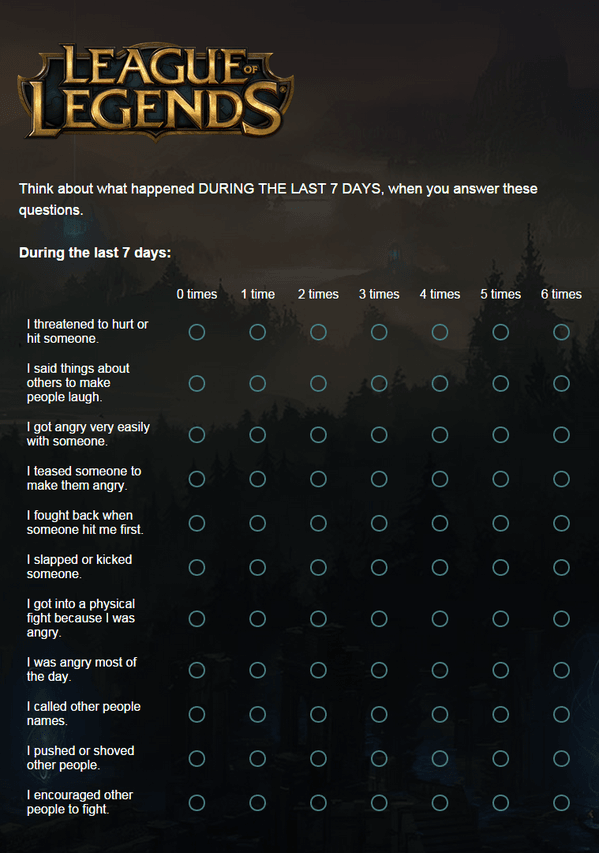 These tests appear to be slightly modified versions of the “Narcissistic Personality Inventory,” created by Robert Raskin and Howard Terry, and “The Aggression Scale: A Self-Report Measure of Aggressive Behavior for Young Adolescents,” created by Pamela Orpinas and Ralph Frankowski. This has been pointed out by other publications who have noted the strange and inappropriate nature of the surveys.

Riot Games have received equal parts criticism and praise for their fixation on combating what they call “toxic” behaviour in-game. The head of their player behaviour team, Jeffrey “Lyte” Lin, has given multiple talks at academic institutions and games developer conferences about how his systems make for a better experience for all players. It was even reported in The Verge earlier this year that Riot Games have been visiting schools to “share data and best practices.”

The bulk of the work used to be done by a system called “The Tribunal,” which encourages other players to vote on whether or not they would punish their fellow players based on a cross-section of in-game chat-logs. This method has since been replaced by automated systems that operate via machine learning, something which Lin boasts will protect all players from “racism, sexism, homophobia and other kinds of hate speech.”

In practice, however, it seems the automated systems mostly ban for in-game trash talk and verbal abuse, with multiple players linking what is referred to as “report cards” and decrying what they deem to be harsh bans. A significant number of long-term players now feel that the focus on policing what they are saying to one another in game has been prioritised over a number of much-needed in-game improvements and even focusing on greater in-game disruptions such as scripters and griefers.

However, Riot Games show no sign of easing off of their crusade to eradicate “bad” language from their game and force their player base to embrace their values. This latest initiative of cleaning up offensive names, which came unannounced, has seen a significant number of users left scratching their head as to what exactly was wrong with their in-game monickers. After having reached out to several users who were complaining on the community hub, the subreddit r/leagueoflegends, the examples of banned names showed some that seemed harmless. Some we were given were GaylordLiang, Okami the God, FABULOUS GAY DAD, OsamaSpinLadin, PenisManComeBac, lucian 8 my kfc, and El Chapo Jr. They also seem to have changed the names of players who have made requests for balance improvements, with one user called “pls buff Shaco” finding his name altered without any explanation.

One Reddit user who took the in-game name of MiniMen even claimed their name was changed to MenAreOppressors, although it must be noted they didn’t provide any screenshot evidence of this.

Names are changed to something that Riot Games deem to be benign, such as WarmManatee, and then players are told that they must complete the above survey and play fifty games with their new name. At that point the player will be invited to take another survey, the content of which is currently unknown, and then they will receive a name change “free of charge.” Alternative users can pay using the in-game currency of Riot Points to change their name to something else, with the 1300 Riot Point valuation costing approximately ten dollars.

In a Reddit post made by the Riot staff member calling themselves “WookieeCookie” they tried to explain the rationale behind the sudden desire to clean up player usernames. “The goal is simple” they explained. “Target players with inappropriate names and automatically change their name to something more innocent.”

When asked how they selected the names, the response was dismissive and less professional. “I won’t go into the specifics but it was mixture of things which include feedback from players, individual audits by a Rioter, magic, and a lot of alcohol,” they explained.

Leaving several players disgruntled could be the least of Riot’s worries. Given that the Entertainment Software Rating Board rated League of Legends as “Teen,” recommending it for players as young as thirteen, the probing nature of the questions being aimed at minors could certainly be met with a backlash. Certainly there are some questionable ethics surrounding the asking of an unsupervised teenager about whether or not they feel depressed, or do they get in fights in their everyday lives.

Despite multiple people having made this point on social media, Riot have yet to issue an official response regarding the content of the surveys. Breitbart has reached out to them and will publish any response they send us.