Phil Robertson is diving back into the culture wars. And Lord, is he angry.

The ‘Duck Dynasty’ reality-TV patriarch’s next in-your-face project is ‘Torchbearer,’ a film being screened next week for distributors at the Cannes film festival.

It’s a fire and brimstone look at the decline of Europe and the United States from the viewpoint of an evangelical crusader. And the news from Robertson’s perspective is not good.

Robertson says the Roman Empire’s bloody debauchery, Robespierre’s French Terror, the Nazi genocide, the Khmer Rouge, Boko Haram, the ISIS terror army, and America’s embrace of abortion – yes, he goes there – are the predictable results of cutting God out of entire societies.

‘If there’s no God, what difference does it make if you’re a mass-murderer or a saint? We’ll all be dead soon, so who cares?’ his Louisiana twang asks as pictures of pro-abortion activists fade to Adolf Hitler, and then to Mother Teresa.

‘You know, people talk about hell? And some argue that there’s not a hell?’ the bearded contrarian deadpans down the barrel of a camera with the ovens just a yard or two behind him. 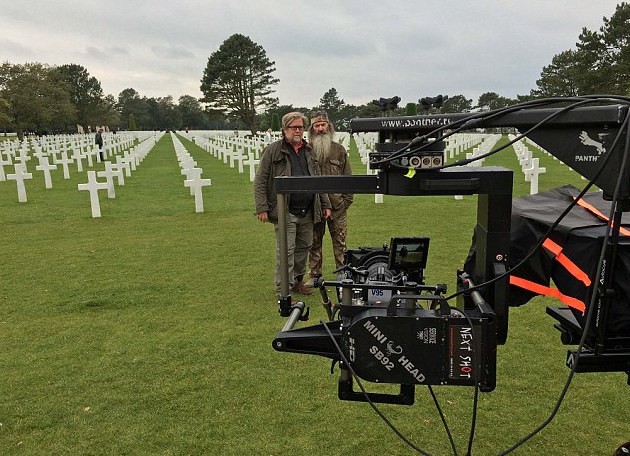 Stephen K. Bannon and Phil Robertson filming at the American Cemetery in Normandy

Nearly everything that that’s gone wrong in the Western world, he argues, is the result of society crumbling because people break their ties with the Almighty.

Branding Hollywood as food for ‘animals following our instincts,’ he declares that ‘the sexual experience is now the highest summit of our happiness’ – while Miley Cyrus writhes on her wrecking ball and Justin Bieber takes off his shirt.

‘What happens when it still leaves us empty and lost?’ Robertson asks as J.Lo twerks on screen.

And Kim and Kanye?

‘You are your own god,’ he declares over footage of the Kardashian-Wests posing for cameras at last year’s MTV Video Music Awards.

The Duck Commander’s inner scold comes out more times than a Sunday School teacher could count, but that’s the point.

The film’s likely targets, Bible-believing voters in flyover country, will recognize the vocabulary.

‘When man stops believing in God, he’ll believe in anything,’ Robertson says during one segment about the Manson murders and the cult leader Jim Jones’ death-by-Kool-Aid.

He told DailyMail.com on Monday night that ‘the Nazis and the Shintoists and then the communists, and then the latest crop, the Islamists,’ have a common denominator that appears ‘when you remove the God of the Bible from your conscience and you let men, mere men, determine what’s right and what’s wrong.’

‘They all wanted world domination. And there’s a lot of murder involved in all four of them,’ Robertson said. ‘It seems that most people would say, “Hmmm, there’s a pattern”.’ 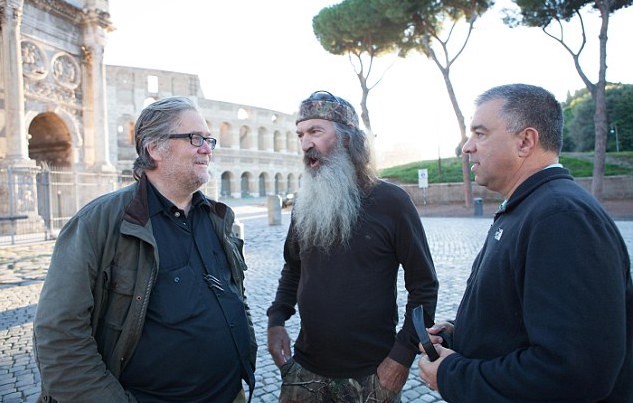 David Bossie, the president of Citizens United – the group whose name became synonymous with the rise of the super PAC following a 2010 Supreme Court ruling – is one of the movie’s executive producers.

He was quick to cop to a political motive for making ‘Torchbearer,’ telling DailyMail.com that he wants it to reinvigorate large numbers of U.S. Christians who don’t engage with politics and have fallen away from voting.

‘We can help motivate the evangelicals who didn’t find themselves in Romney in 2012, or in McCain in 2008,’ he said. ‘So we’re trying to educate, motivate and get those people on their feet and moving again.’

‘Who would have thought that it would come down to Ted Cruz, who is truly an evangelical leader, and Donald Trump, who won a big chunk of evangelical voters, surprisingly enough?’ Bossie mused.

Another executive producer on the project, Rebekah Mercer, has been linked through her father, the hedge fund billionaire Robert Mercer, to Cruz’s failed presidential bid.

The Mercer family gave at least $11 million this year to one of the pro-Cruz ‘Keep the Promise’ super PACs – the one credited as the driving force behind a plan to persuade Republican National Convention delegates to support the Texas senator if Trump had been unable to win the GOP nomination on the first ballot.

Bossie said Mercer was motivated by the project’s merits, and not by the promise of which candidate it might benefit in the fall.

‘But now that Trump is the nominee,’ he said of the real estate tycoon, ‘he’s going to need that kind of help’ from the Christian right.

Steve Bannon, the executive chairman of the Breitbart News website, directed the movie and said it will have its official premiere during the Republican National Convention in Cleveland on July 17.

He told DailyMail.com that ‘”Torchbearer” is a war film. It’s meant to shock, to disturb, to wake people from their sleep.’

‘I admire Phil for having the guts to make this film – because payback against him, I’m sure, will be intense.’

He became a one-man lightning rod in 2013 after he told GQ magazine that homosexuality was sinful on the same level as bestiality.

The voices calling for his head were so loud that A&E network suspended him from his own show.

Robertson said Monday that he expects ‘Torchbearer’ to gin up the same kind of backlash.

‘Insults, persecution, shunning, all those things come on such a regular basis from so many groups,’ he said in response to a question about the gay-rights movement’s view of him.

‘Jesus warned his disciples, “Look, they will hate you. They will mistreat you. They will say all manner of mean things about you. Just rejoice and be glad.’

‘To tell you the truth, it does not bother me one bit at all,’ he said.

The opening credits of ‘Torchbearer’ almost invite the next round of conflict that could turn Robertson into an even bigger Bible Belt cult hero.

They include former MSNBC commentator Touré blasting him for ‘completely ignorant, dinosaur-age, kind of cro-magnon comments,’ and an unnamed pundit pronouncing him a ‘sweaty-toothed madman’ who ‘looks like a homeless lunatic who might shoot you.’

But Robertson looks positively angelic next to those stomach-turning ISIS killing scenes. In one, a helpless man is crushed under the treads of a tank.

‘We had to show their barbaric nature. We just had to. Americans need to know what we’re up against,’ said Bossie, the Citizens United honcho whose film studio division has produced more than two dozen feature-length documentaries in the last 12 years.

‘I hope they look at this film and see it as a PG-13,’ he said of the Motion Picture Association of America. ‘But we’ve been through this before with them.’

QUOTES FROM THE FILM:

Duck Dynasty’ patriarch Phil Robertson vents about ‘godless’ modern society in ‘Torchbearer,’ which will premiere in Cleveland during the Republican National Convention

ON EVOLUTION: ‘If a man is not made in God’s image, if we’re merely animals biologically determined by survival, then the right thing to do is let the weak die so the strong can live. This social Darwinism, it led right to the eugenics movement and people like Margaret Sanger, the founder of Planned Parenthood. Sanger’s idea was to weed out the so-called “inferior” races.’

ON THE FALL OF THE ROMAN EMPIRE: ‘Rome is no different than any other empire. It was destined to fade and die. You ask why? Divorced from God, the City of Man devolves into strife, war, and the will to power over others, which eventually ends in ruin.’

ON THE FOUNDING OF THE UNITED STATES: ‘If you have life, and you have liberty, and you’re happy. happy, happy, what else is there? You know why you can have life, liberty and the pursuit of happiness? Because they come from God.’

ON THE FRENCH REVOLUTION: ‘In the absence of God, man becomes the sole determiner of human worth. And if that man happens to favor the guillotine, well, expect a lot of heads to roll.’

ON THE FIRST ATOMIC BOMB: ‘Fallen man, unanchored by God, uses the power of creation to destroy.’

ON MARTIN LUTHER KING JR.’S ‘LETTER FROM BIRMINGHAM JAIL’: ‘Reverend King was calling out those white Christian ministers who were standing idly by on the sidelines while blacks were fighting for their civil rights. Underneath it all was the implicit understanding that human rights do indeed come from God. … And in a world where God does not exist – he’s not there – there is no case for justice. Might makes right.’

ON GENOCIDE:’When you take out God as the anchor of your civilization, you open the door to tyranny. Instead of human rights, … we are nothing more than the masses. Just objects among other objects to be manipulated by the most powerful in society who declare themselves God and assign worth.’

ON THE FLOWER-POWER GENERATION: ‘Hey, we might not believe in God anymore, but we still feel a sentimental need to be nice to each other. Of course there was no one more sentimental than the hippies, but what started out as free love and flowers in your hair ended up with the Manson murders, a group of acid-dropping hippies on a murder spree because a man who declared himself God told them to.’

Listen to Phil Robertson’s interview about the film on Breitbart News Daily on SiriusXM: