Actress Debra Messing posed for a selfie in support of gun control just as a manhunt began for the suspect who opened fire on the campus of University of California, Los Angeles (UCLA) Wednesday morning.

Two victims were shot on UCLA’s gun-free campus at around 9:53 a.m. Wednesday morning, Breitbart News previously reported. At 10:35 am, as police began searching for the perpetrator, Messing tweeted a selfie with the caption: “HORRENDOUS Watching news about shooting at UCLA with casualties while taking selfie 2bring awareness to Gun Violence.” 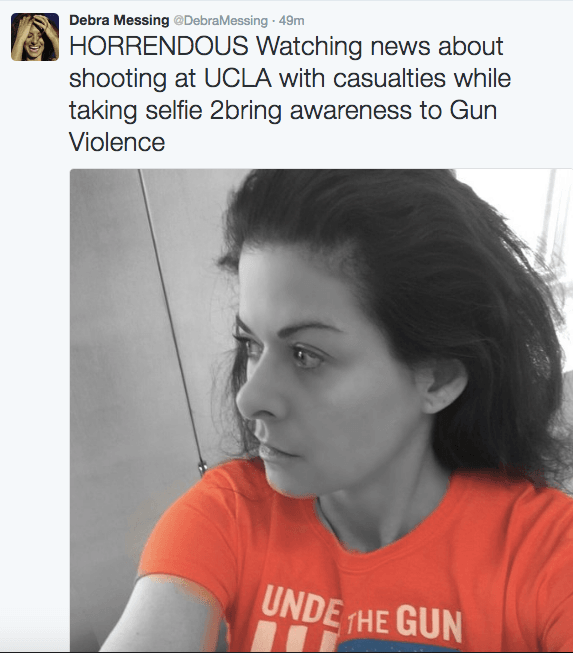 The actress wore a shirt with the logo from Katie Couric’s gun control documentary Under The Gun. Couric recently apologized for “misleading” viewers with edits in the film designed to make pro-2nd Amendment advocates appear foolish.

The tweet featuring the photograph appeared to have been deleted shortly after it was posted.

Messing apparently faced significant backlash shortly after posting the tweet. In a series of follow-up messages, the Will and Grace star said she never intended to cause offense and was simply a victim of “the horrendous irony of the timing” of the post.

Today we were asked to have our Voices heard. The horrendous Irony is the timing of yet another shooting. This has NOTHING to do with me.

1-I guess I didn't. The pix was being taken just AS the news broke. I thought the horrendous irony of the timing https://t.co/iy6Cr2EerK

2-shown a brighter light in the crisis and need for all of us to do something together to make the US safer. Sorry https://t.co/iy6Cr2EerK

3- if it was misconstrued and caused offense. That's the last thing I want to do. https://t.co/iy6Cr2EerK

Messing failed to mention that the UCLA campus is gun-free —like all California college campuses. In other words, the campus has 100 percent gun control.

A short time later, Messing tweeted a longer statement in defense of her initial tweet: