Embattled comedian Kathy Griffin is speaking candidly about the shock photograph published in May in which she held up a bloodied head meant to resemble that of President Donald Trump, and says she has every intention to continue to keep criticizing the president.

In a lengthy interview with New York magazine’s The Cut, Griffin discussed the national firestorm her photo caused — she was fired from CNN where she co-hosted the network’s annual New Year’s Eve broadcast, faced a social media-led boycott that led to her stand-up shows being cancelled, and was the subject of a Secret Service investigation — and says she isn’t apologizing and is “obligated” to criticize President Trump.

“Why are people still expecting me to apologize and grovel to a man that tweets like this?” she told the outlet. “I’m a comedian; he’s our f—ing president.”

“President Trump just pardoned Joe Arpaio, who was essentially running a concentration camp in the Arizona desert,” she later explained. “He said there are some good Nazis, and he’s kicking out young adults who were brought here as kids by their parents, and I’m the one who has to continue to apologize?”

The photograph, originally published by TMZ and taken by Los Angeles-based photographer Tyler Shields, sparked an immediate backlash after it went viral in May. (TMZ/Tyler Shields)

President Trump tweeted that Griffin “should be ashamed of herself” and that her photo had been difficult for his children, including his 11-year-old son, Barron.

Three months after the highly-publicized scandal, however, Griffin says she is no longer friends with her longtime CNN co-host Anderson Cooper and says several of her celebrity friends comforted her privately during the drama but declined to defend her on the record when contacted by The Cut. 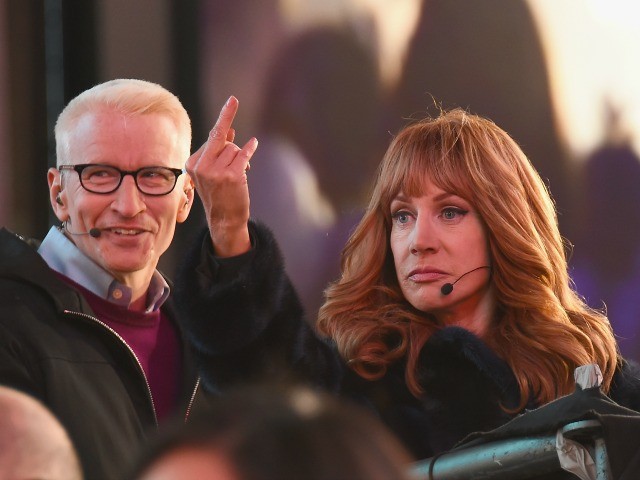 Now Griffin is looking ahead and says she wants to organize a First Amendment concert with the ACLU; she’s planning a documentary film of her upcoming international tour, and will trash Trump on foreign soil as opposed to performing U.S. shows because “she’s still too worried about her physical safety to tour America,” The Cut reports.

Griffin had initially released an apology video shortly after the controversy over the photo began in earnest, in which she explained that she had made a mistake and that her joke had gone too far. According to The Cut, it was longtime Trump nemesis Rosie O’Donnell who convinced the comedian to issue the apology, after the photo drew widespread criticism from both sides of the political aisle.

But the apologies appeared to end there; Griffin appeared on Australian morning show Sunrise Monday to slam President Trump and his voters.

The 56-year-old got into a war of words with Sam Armytage while promoting her upcoming stand-up tour. When asked if the photo went too far below the belt, Griffin told the morning show host “you’re full of crap.”

“Stop this. You know this. Stop acting like my little picture is more important than talking about the actual atrocities that the President of the United States is committing,” Griffin said.

“No, I don’t apologize for that photo anymore and I think the outrage is complete BS because we have real things to deal with,” Griffin added.

After Armytage insisted that she was asking fair questions, the My Life on the D-List star said “No I got it. I got your number. You’re like a white Trump voter in America. I got your thing.”