George Clooney continued to hit out at Steve Bannon in an interview to promote his latest film Saturday, calling the former White House chief strategist and Breitbart News executive chairman a “p*ssy” in a second profanity-laced rant this weekend.

In an interview with the Daily Beast Saturday, Clooney called Bannon a “wannabe writer,” criticizing his film career for the second time in as many days after having previously called him a “failed f*cking screenwriter” at the Toronto International Film Festival on Friday.

“Here’s the truth: if Steve Bannon had Hollywood say, ‘Oh, this is really great, and a really good script,’ and had they made his movie, he’d still be in Hollywood writing his f*ckin’ movies and kissing my ass to be in one of his f*ckin’ films!” Clooney told the Daily Beast. “That’s who he is. That’s the reality.”

On Friday, the Suburbicon director told reporters at TIFF that had Bannon remained in Hollywood, he “would still [be] making movies, and licking my ass to get me to do one of his stupid-ass screenplays.” 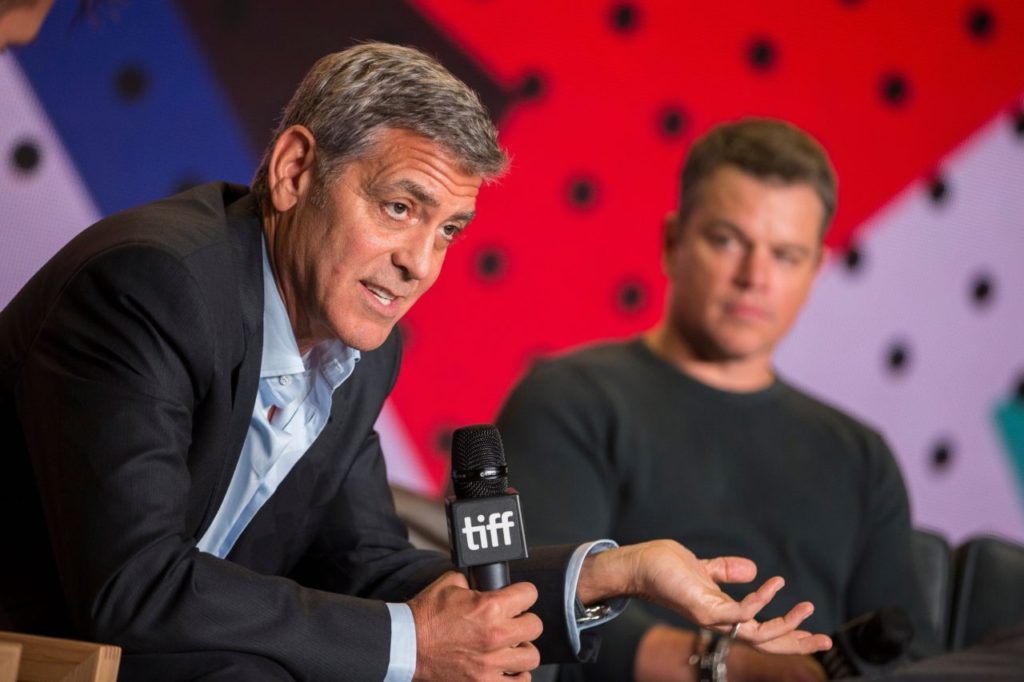 Director George Clooney speaks next to Matt Damon during the press conference for ‘Suburbicon’ at the Toronto International Film Festival in Toronto, Ontario on September 10, 2017. / AFP PHOTO / Geoff Robins

Clooney’s renewed attack on Bannon came as the former chief strategist and CEO of Trump’s presidential campaign gave his first post-White House interview to 60 Minutes‘s Charlie Rose on Sunday, during which he pointedly told critics they could call him anything they want while he continues to advocate for Trump’s economic nationalist message for the benefit of America’s working class of every race, ethnic background, and sexual orientation.

“And by the way, that’s every nationality, every race, every religion, every sexual preference,” he added. “As long as you’re a citizen of our country. As long as you’re an American citizen you’re part of this populous economic nationalist movement.”

Clooney has repeatedly slammed Trump and his administration while promoting Suburbicon, the Matt Damon and Julianne Moore-starring thriller set in 1950s suburbia. The star said the “genesis” of the film’s screenplay came from watching Trump’s campaign speeches about “building fences and scapegoating minorities” on television.

“It becomes increasingly clear how in over his head and incapable this man is of being president of the United States,” he told the Associated Press this month. “The good news is that our other institutions — meaning press, finally, and judges and senators — have proven that the country works. There is a check and balance.”

Clooney also ruled out a potential run for office in the near future, telling reporters Friday that despite a lack of “exciting” Democratic politicians currently on the bench, he believes there are better qualified candidates.

“I say just try to find a candidate that excites you, and it shouldn’t be me,” he said.

Despite setting aside his own political aspirations, the actor-director was a key contributor to Democratic presidential hopeful Hillary Clinton’s failed 2016 campaign, having hosted a $33,400-per-plate fundraiser for the candidate in April — and despite having previously described the amount of money in politics as “obscene.”

In August, Clooney and his wife Amal pledged $1 million to the Southern Poverty Law Center, a donation the actor said would go toward fighting “bigotry and hate.”