Actor Kelsey Grammer explained why he is pro-life in an interview last week with the Times, calling out the abortion industry as “dishonest” for using the euphemism of “reproductive rights” to speak about abortion.

Grammer told the Times he has “as much respect for women and women’s issues as possible,” but said that women’s rights are not what is at stake with abortion.

It “gets a bit dishonest to call something reproductive rights when you clearly have a choice well before a baby is conceived,” Grammer noted, which is when reproduction actually happens.

The 63-year-old actor known for his role as Dr. Frasier Crain in the sitcoms Cheers and Frasier said that abortion unfairly punishes an infant for others’ actions, even in the case of rape.

“If someone has to die as a result of rape, then we should kill the rapist – not the unborn child,” he said. “It’s a dicey area, but if you have respect for life, and respect for choice, then you can’t take life away from an infant.”

“Little makes me angry, but injustice does,” he said.

Grammer has occasionally gotten under the skin of Hollywood liberals with his openly pro-life stance as well as his support for the Second Amendment.

As Breitbart News reported, in 2015 the actor Kelsey Grammer drew heavy fire for sporting a T-shirt with a pro-life, pro-2nd Amendment message that his wife Kayte posted on her Instagram page. Grammer’s shirt from pro-life organization Abort73.com, which advocates for overturning the 1973 Roe v. Wade decision, bore the message “Would it bother us more if they used guns?” referring to the legal killing of millions of babies. 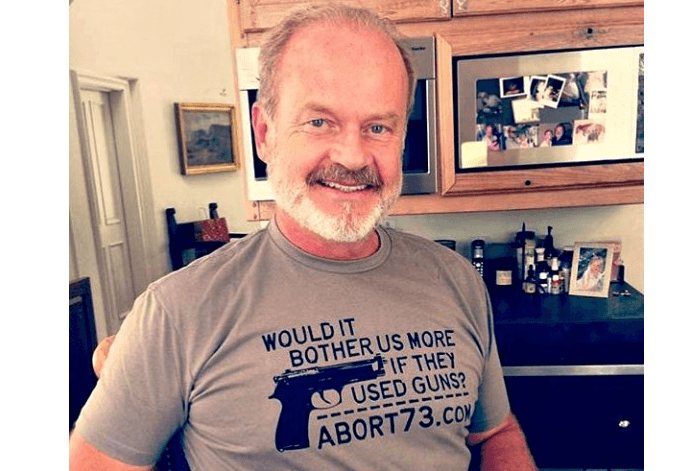 That same year Grammer attended the National Right to Life Convention with his wife, and in 2016 came to the March for Life in Washington D.C. to protest legal abortion.

“We’ve distorted things to the point where people believe that anyone who opposes mothers killing their babies is waging a war on women. How can we be so foolish to believe such a thing? One must be able to recognize the depravity to which we have sunken as a society when valuing a baby’s life is frowned upon.”