There are basically three types of Christian films: First, there are those glorious epics of old like The Robe and The Ten Commandments, which 2014’s Exodus: Gods and Kings proved no one has the talent to make any more.

Then there’s this new genre of Christian movies that act as shiny 90-minute ads for the faith: “Buy Christianity now to immediately improve your life! Call within the next 30 minutes and we’ll throw in eternity!” While I am glad those movies are out there and increasingly popular, I smoke a different brand.

Finally, there are those that examine the dark and more complicated side of it all, the cinematic travelogues into the tortured chunks of the human condition that grapple with faith, the loss of faith, the brutal toll of being on the wrong side of God, and the unfair reality that proves true the old adage that becoming a Christian is the beginning of your problems, not the end.

Those are my kind of movies … The Passion of the Christ, The Bad Lieutenant (1992), The Rapture, Diary of a Country Priest, Ordet, The Passion of Joan of Arc, The Song of Bernadette, The Last Temptation of Christ, Crimes and Misdemeanors, The Grey, A Clockwork Orange, Angel Heart, Black Narcissus, The Exorcist.

More than a few of the above titles are considered by some to be pulp and or profane rages against God. Yes, and you could say the same about large portions of the Bible. Some, such as The Grey and Woody Allen’s Crimes and Misdemeanors, are about a world where there is no God. Yes, and what an awful and unnatural world that is.

As much as I love and openly embrace my Christian faith, in a myriad ways that are none of your business, I relate much more to the Dark Night of the Soul genre than to the infomercials and epics, and writer-director Paul Schrader’s First Reformed (released on Bluray this week) is one of the all-time greats. 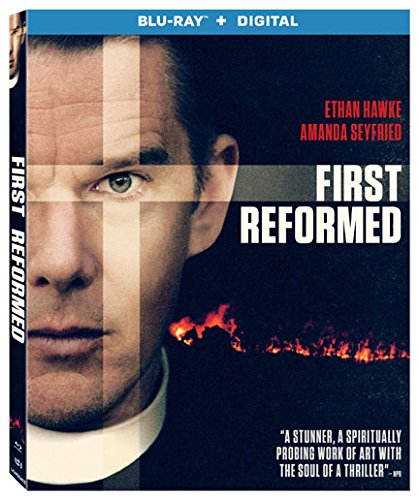 Already I have watched First Reformed twice, which means that outside of its journey into a man’s shriveled spirit, it is something better — one of those experiences you can never quite grasp, that has to be seen again and again. The performances, cinematography, writing… All top notch. And in this increasingly brain-dead world of chop-chop-cut-cut-move-groove, what a pleasure it is to get lost in a story that takes its sweet-ass time, where the camera only separates from the tripod when it matters (I counted three times), where the burn is as sure as it is slow.

Reverend Ernst Toller (Ethan Hawke in an Oscar-worthy performance) did everything God and America told him to. He got married, had a son, served his country in the military, served his God as a military chaplain, and when it came time to sacrifice his own son, he did so to the Iraq War.

And for always doing the right thing, Toller lost his son and then his wife and then his faith, and now he barely exists as the nearly invisible reverend of First Reformed, a 250-year-old Dutch Reformed Church lucky to attract a half-dozen Sunday attendees.

To make matters worse, First Reformed is really just a tourist attraction subsidized by a McMegachurch. And so, like a Disney World automaton, all of Toller’s needs are perfectly attended to in a sterile universe that only calls on him to come out and perform on Sunday mornings and when the tourists arrive for a look-see that exits through the gift shop.

As he goes through the motions of a life lived in corporate hell, where his only way to rebel is to insist on fixing a leaky sink, try as he might, the God-shaped hole growing within him cannot be filled, not with alcohol or with the hand-written journal he keeps; which is his last act of faith, his way of conjuring his dark thoughts into something real in the hopes destroying the journal will somehow destroy that part of himself.

Toller cannot pray, cannot return love, and the worsening pains in his stomach and blood in his urine are only further proof of God’s indifference, which might be worse than there being no God at all.

Those who do not believe in God will believe in anything. Evidence of this is everywhere. We bear witness to it every hour of every day as it is delivered straight into our living rooms through a  media and culture that celebrate this tragedy, that normalize and encourage it. And so the legions of believers-in-anything appear to be growing, those with God-shaped holes in their soul, those with the unquenchable need to matter that manifests through the toxicity of narcissism.

In Christianity this need is filled with a healthy confidence and sense of purpose mixed with an even healthier humility (at least it’s supposed to). Among the secular, though, it is filled with a demonic need to assume the role of a know-better god, a witches brew of all-about-me and the fascistic impulse to boss everyone around. 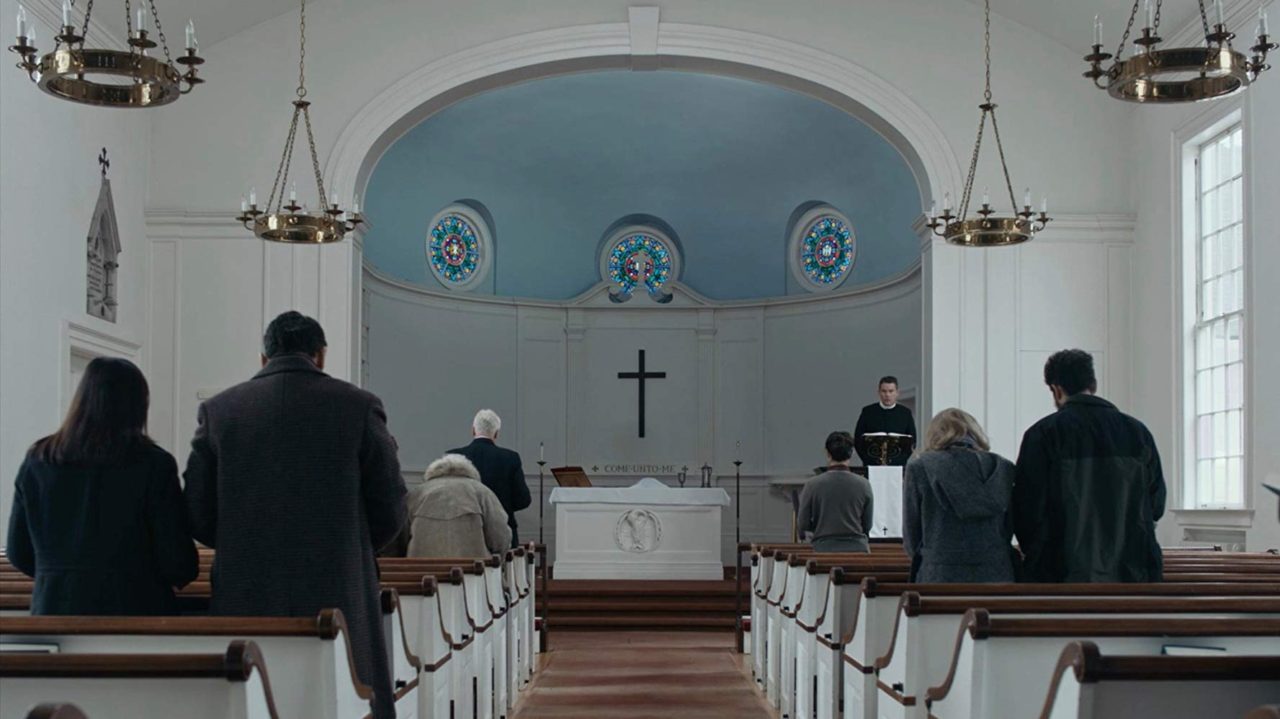 Watching the mild-mannered Toller go about the routine of his routine, you would never know the brew bubbling within, nor could you imagine that a lovely young pregnant woman named Mary (Amanda Seyfried) would unwittingly lead Toller into an abrupt cut to black.

Mary’s husband Michael (Phillip Ettinger) is lost in what many believe is the greatest sin of all, the sin of despair, that dark and selfish place for the hopelessly self-involved who believe nothing matters  when they cannot control what they believe does. 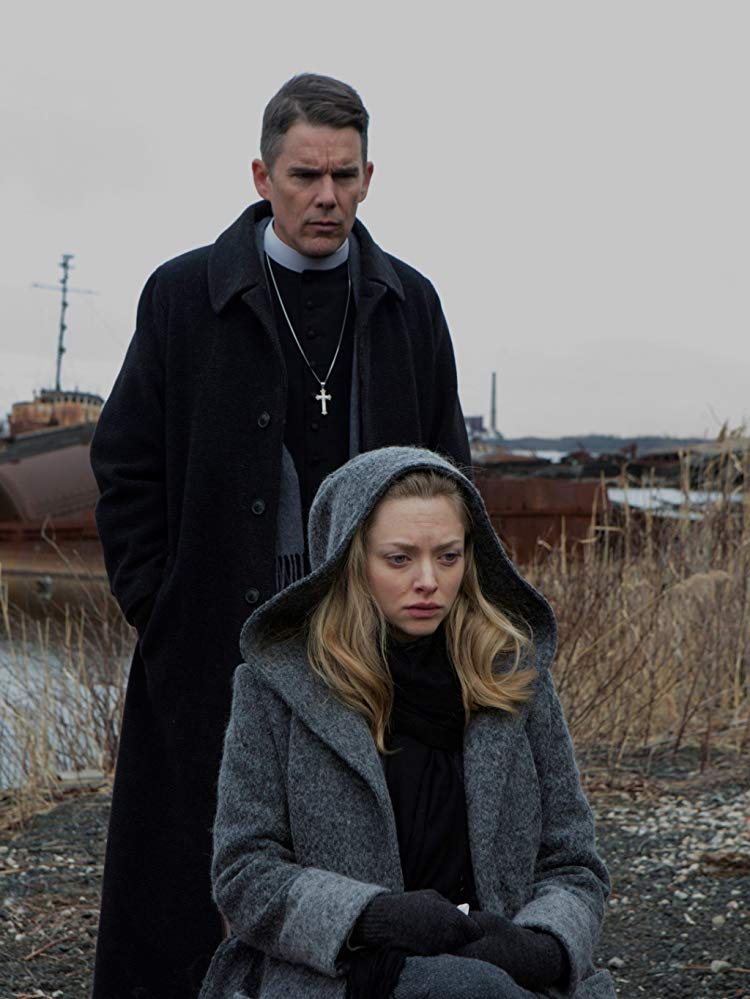 Michael is an environmentalist-extremist who wants to kill his unborn child rather than deliver this child into a world he is sure is just years away from a hopeless environmental apocalypse caused by man’s greed.

In a magnificent 12 minute scene Toller and Michael discuss the state of the world, and we see who Toller once was. He might be wearing a mask for Michael’s sake, saying what he is supposed to say rather than what he believes — what he writes in his journal, but there was a time when Toller actually believed in what he is saying, and for these few minutes he is a man of God again.

Events conspire to take even this away from Toller, and with his God-shaped hole now urgently aching like an abscessed tooth, this open spiritual wound catches the virus of Michael’s environmental despair and with it the fever dream that tells Toller Mother Earth is God, and Mother Earth requires martyrs. And not Christ-like martyrs. After all, Toller sacrificed his own son and all he went home with is bloody urine. No, Mother Earth requires jihad.

At this point, Toller is so lost his mantra becomes the unholy, “Will God forgive us?”

The very idea of collective salvation is itself a demonic act of self-absorption. Salvation is a personal act, the most personal, and it depends on no one but you and your relationship with Jesus Christ. The lie of collective salvation, the “us” is you assuming the role of savior, you assuming the role of God through despair and the drive to balm that despair through force, even violence.

The story’s final moments are not ambiguous. Schrader says they are, even to him, but I think he is just saying that because a good storyteller is never an interpreter. There is simply no question that the abrupt cut to black is a peek into a godless place, the same godless place Tony Soprano was sent to. Maybe Mother Earth loves us enough to make our wishes come true in a final death dream, but what comes after is man’s greatest fear — nothingness.

As Toller selfishly surrenders to his worst impulses, Schrader is not on his side. Not even close. The movie makes this clear (at least it does to me), but for those unsure, you can listen to Schrader’s feature-length commentary. His own complicated relationship with the faith can be found in a 40-year film career, and in First Reformed he works through his own struggles with how he sees the state of the world, but also shows the moral courage to tell us where giving into despair leads.

First Reformed is a frantic prayer sputtered into a Dark Night of the Soul, and it as poetic, haunting, unflinching, and beautiful as it is an expression of faith.