There was not much intrigue about this year’s Golden Globe Awards considering the past year was largely a fail on Hollywood’s part to produce any good movies, though there’s tons of great series to watch on television.

Luckily, the red carpet added some excitement to Sunday evening’s ceremony with Hollywood’s most beautiful leading ladies stunning in custom ensembles. Others, though, looked a mess.

Here, I break down the best and worst dressed from the 2019 Golden Globes.

Actress Emily Blunt was everything you don’t realize you want on a red carpet: Medieval, yet new-age. The impeccable patchwork of Fleur de Lis and Catholic iconography is molded meticulously to Blunt’s figure (it’s McQueen, what do you expect?!) and the balance of structure and ease is so modern, so needed, and so lacking among the rest of the red carpet arrivals.

Between the grey, silver tone of the dress and the fact that she appears to have lots of skin revealed, but actually does not, makes Blunt seem all the more clever. An actress with fashion wit, how refreshing! 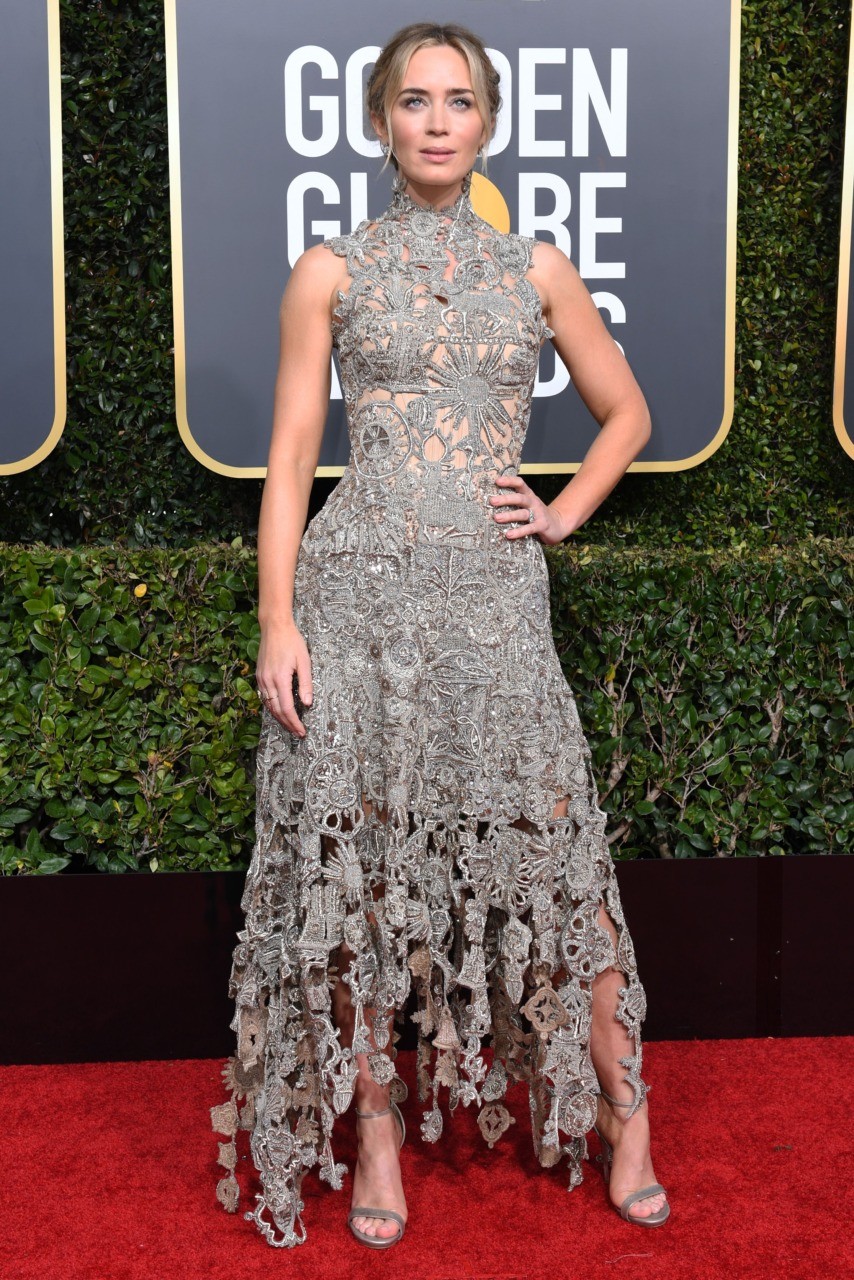 The A Star is Born songstress-turned-actress paid homage to the great Judy Garland in a periwinkle ballroom gown with voluminous sleeves, a modish rendition of Garland’s periwinkle dress from the original 1954 film.

But, because she’s Gaga, the singer made sure her silver updo matched the color of her gown. Her Italian sun-drenched tan set off the color and her glittering jewelry sent this look into regal territory. 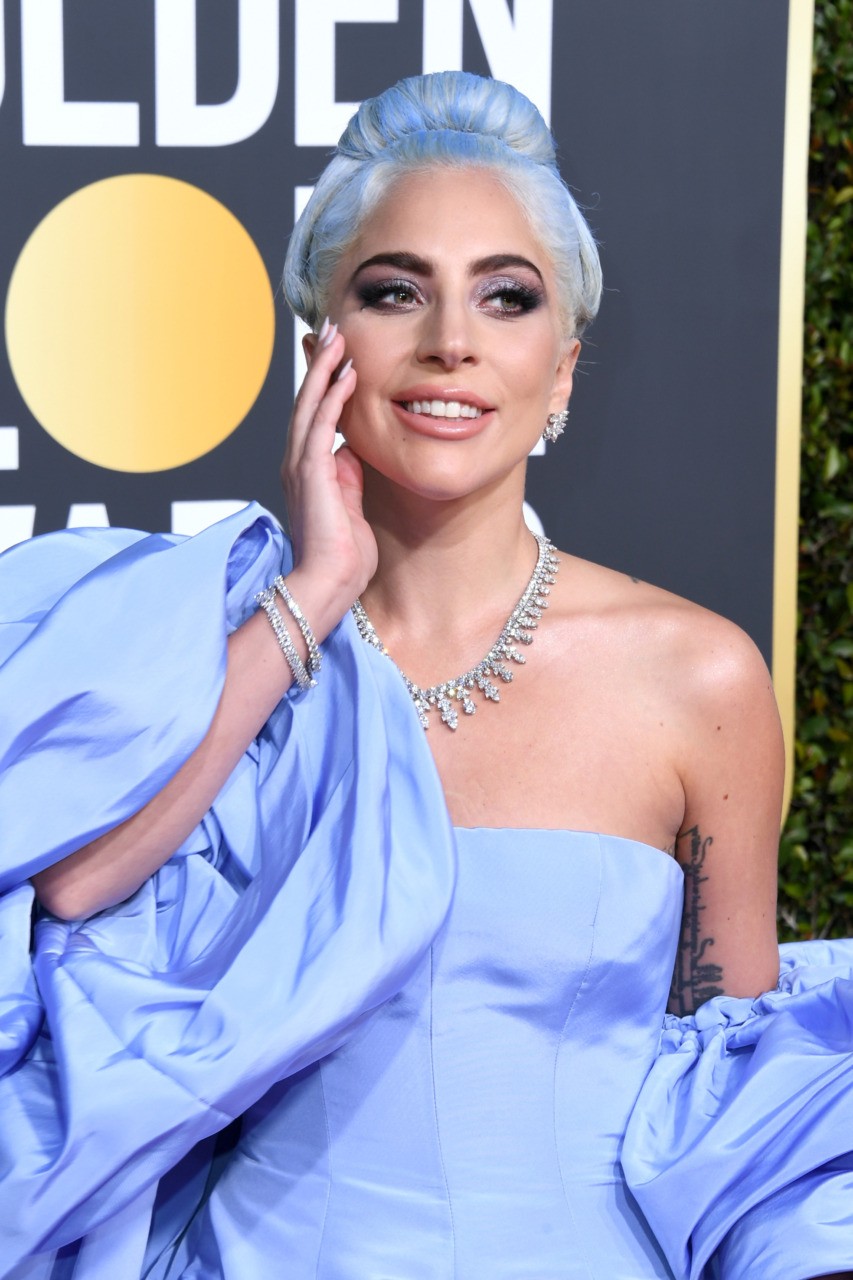 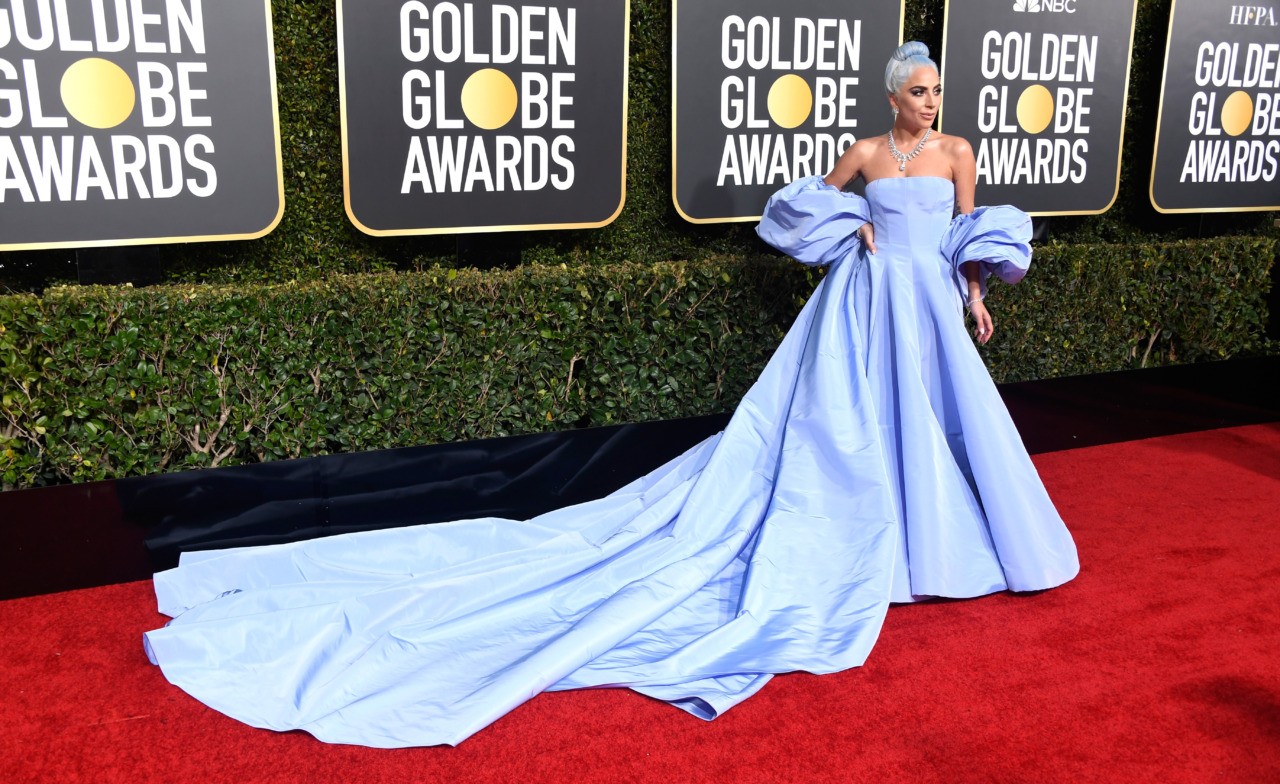 If this is what Riccardo Tisci has in mind as the new creative director for Burberry, we’re in trouble!

So let’s get this straight, actress Jessica Chastain is wearing a black silk skirt with a black sequined skirt layered over it, a sheer black beaded shawl draped over her shoulders, all tucked into a black satin corset. Oh, and fanned-out pink tassel earrings.

Here’s some simple advice for you, Jessica: If when you look at a dress on the mannequin and you can’t figure out how to put it on, don’t wear it. 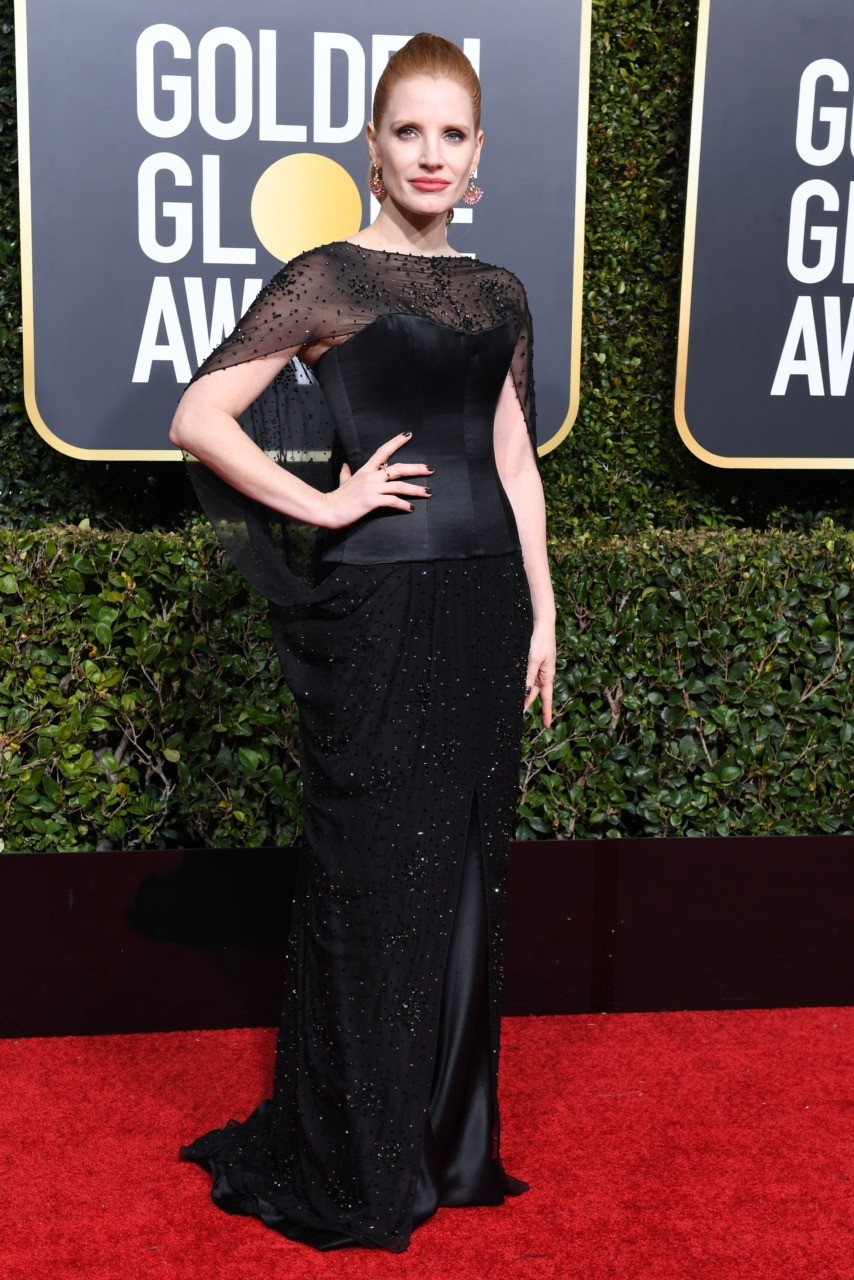 Julia Roberts remains one of the most alluring actresses in the business. (Does anyone else stare in awe looking at her in those Lancôme perfume commercials?) Her less-is-more, no-fuss personal style has long been similar to Jennifer Aniston’s and it’s remarkable to still see an actress stay true to themselves in a celebrity culture obsessed with turning out look-a-likes rather than stars.

The dress-tuxedo pant combo is relatively difficult to pull off, but Roberts does it effortlessly in this one-shoulder Stella McCartney number. And check out those Bulgari dangling earrings, they’re just that extra oomph needed to take this look from basic to breathtaking. 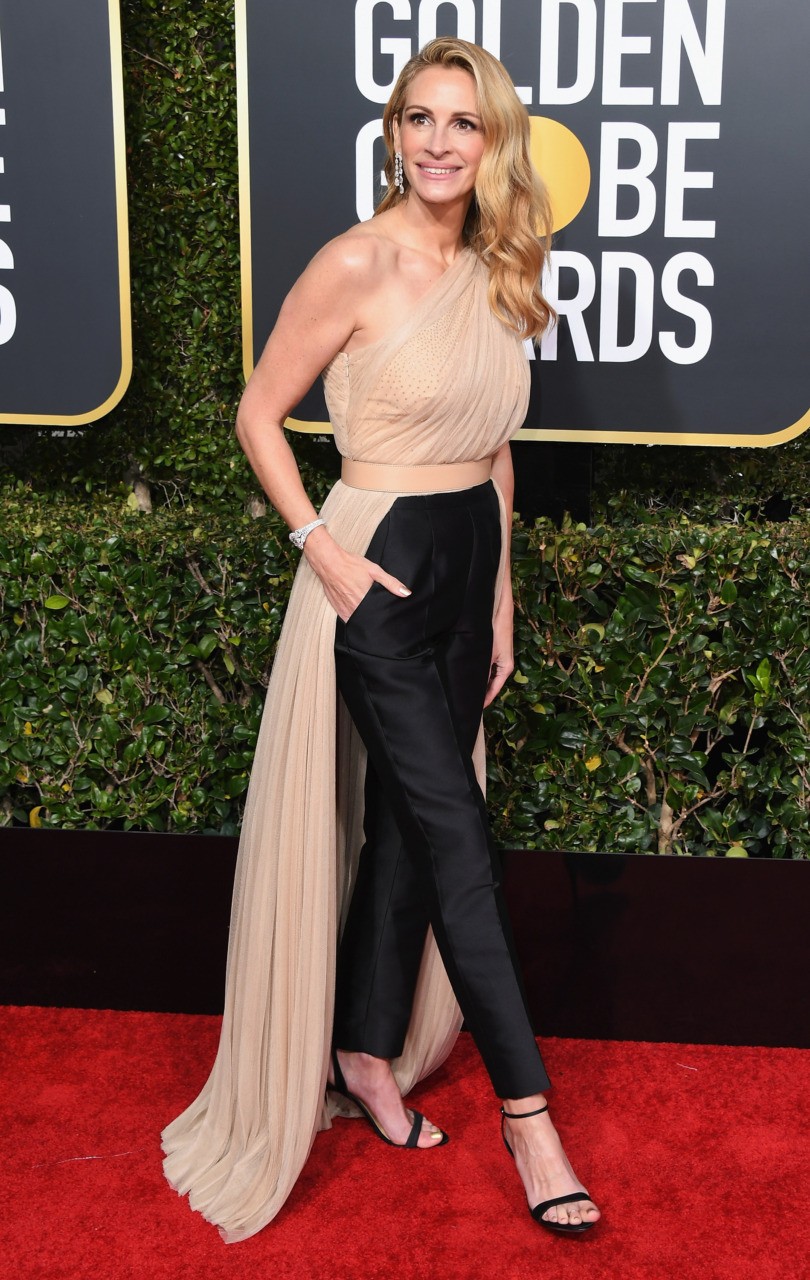 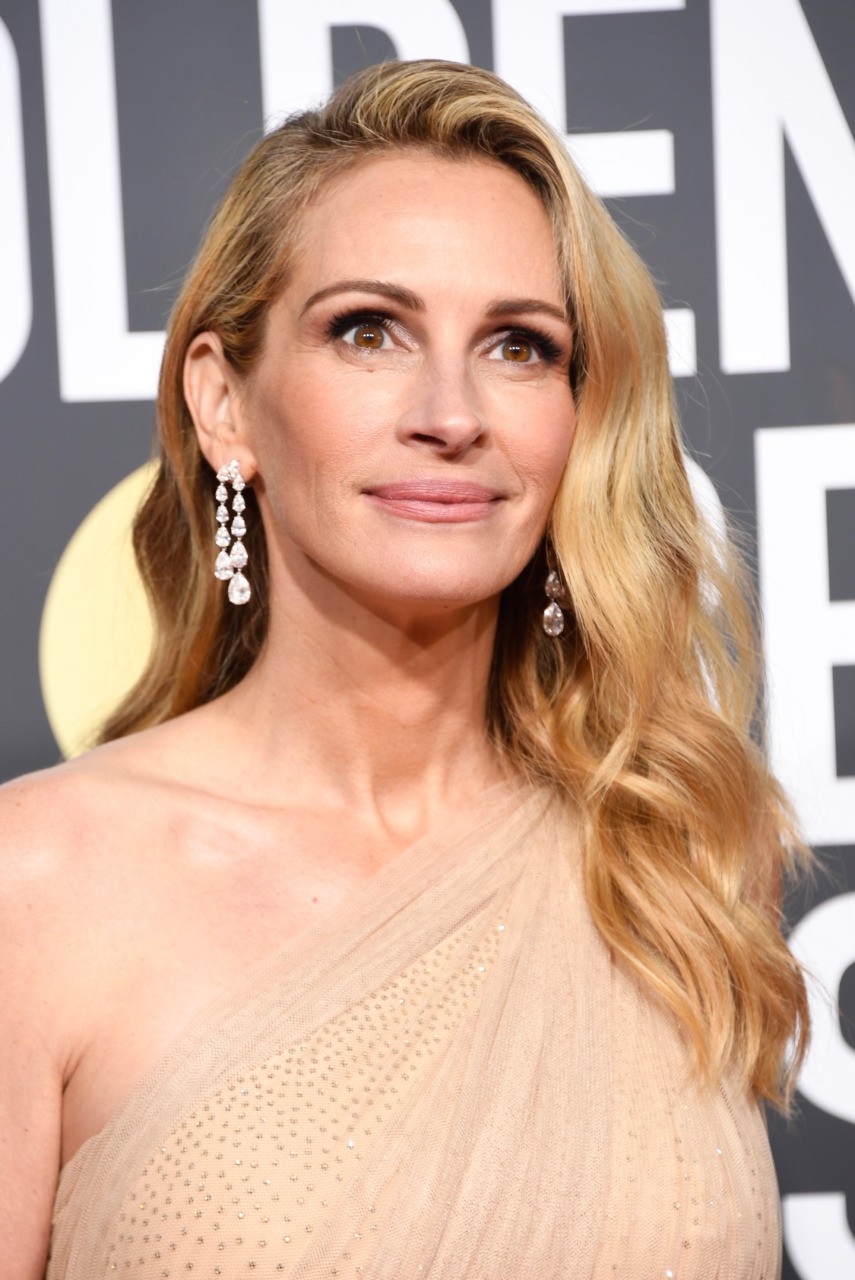 The Handmaid’s Tale star Elizabeth Moss somehow cannot seem to ever hit the mark with her red carpet fashion. At this year’s Golden Globes, the Scientologist wore a navy dress that was not only too short, but overall unflattering.

The menswear-inspired lapels on the bust photograph strange and the asymmetrical gathering at her hip look as though her stylist literally had to pin this dress to her. Not even diamonds can save this ensemble! 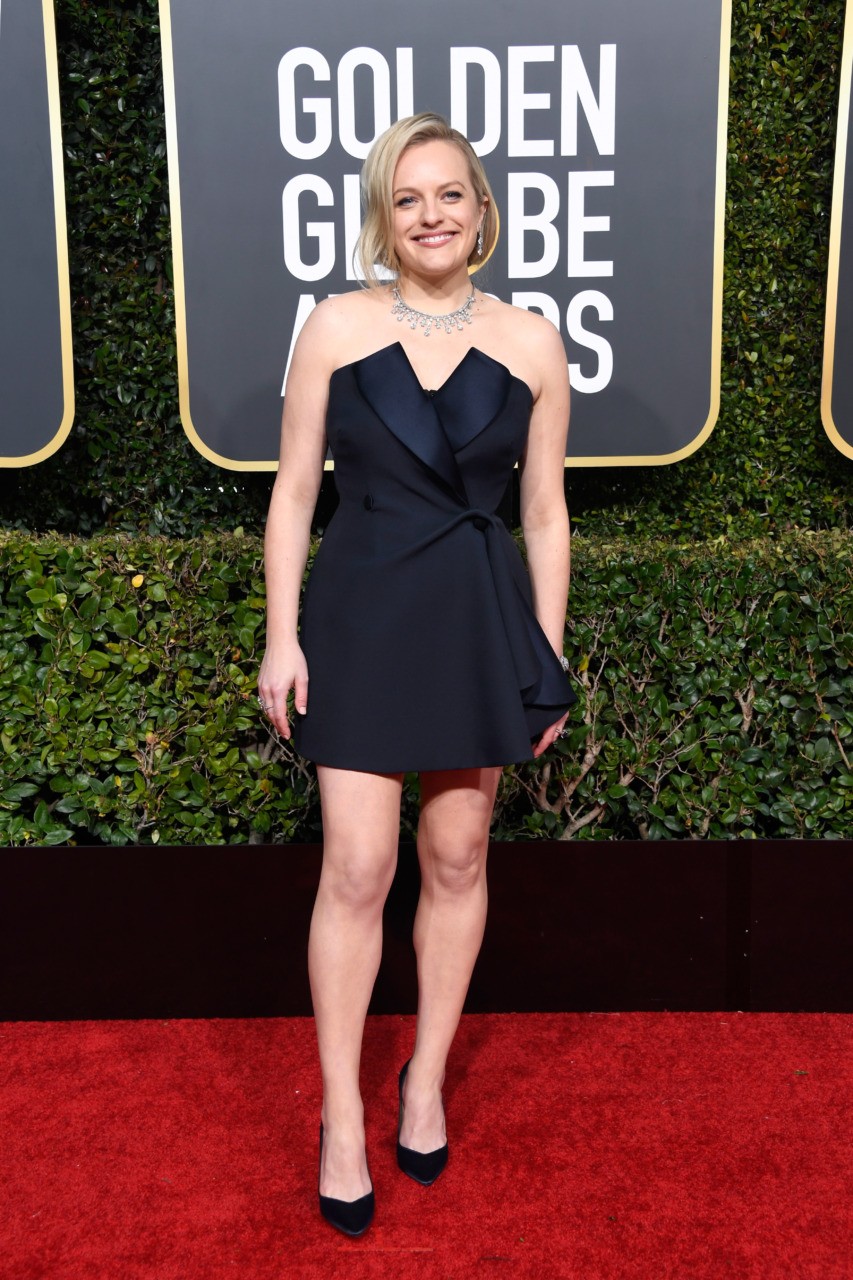 Readers probably recognize Rachel Brosnahan from either Netflix’s House of Cards (she played Rachel, coincidentally) or Amazon’s the Marvelous Mrs. Maisel. The latter is set in the mid to late 1950’s Upper West Side of Manhattan, so as you can imagine, the wardrobe of coats, cinched dresses, and vibrant bonnets and handbags is a joy to see! (Who else has nostalgia for that great Americana period?)

On the red carpet, Brosnahan seemed inspired by the wardrobe of Mrs. Maisel that has made her a star overnight. The top of this bright yellow custom Prada gown has a neckline and ruching reminiscent of the swimwear worn by Marlyn Monroe and Jayne Mansfield.

Juxtapositioned against her dark, nearly black hair and milky fair skin, the styles of yesteryear are suddenly transitioned to contemporary life. That’s not an easy undertaking to make the past seem new. 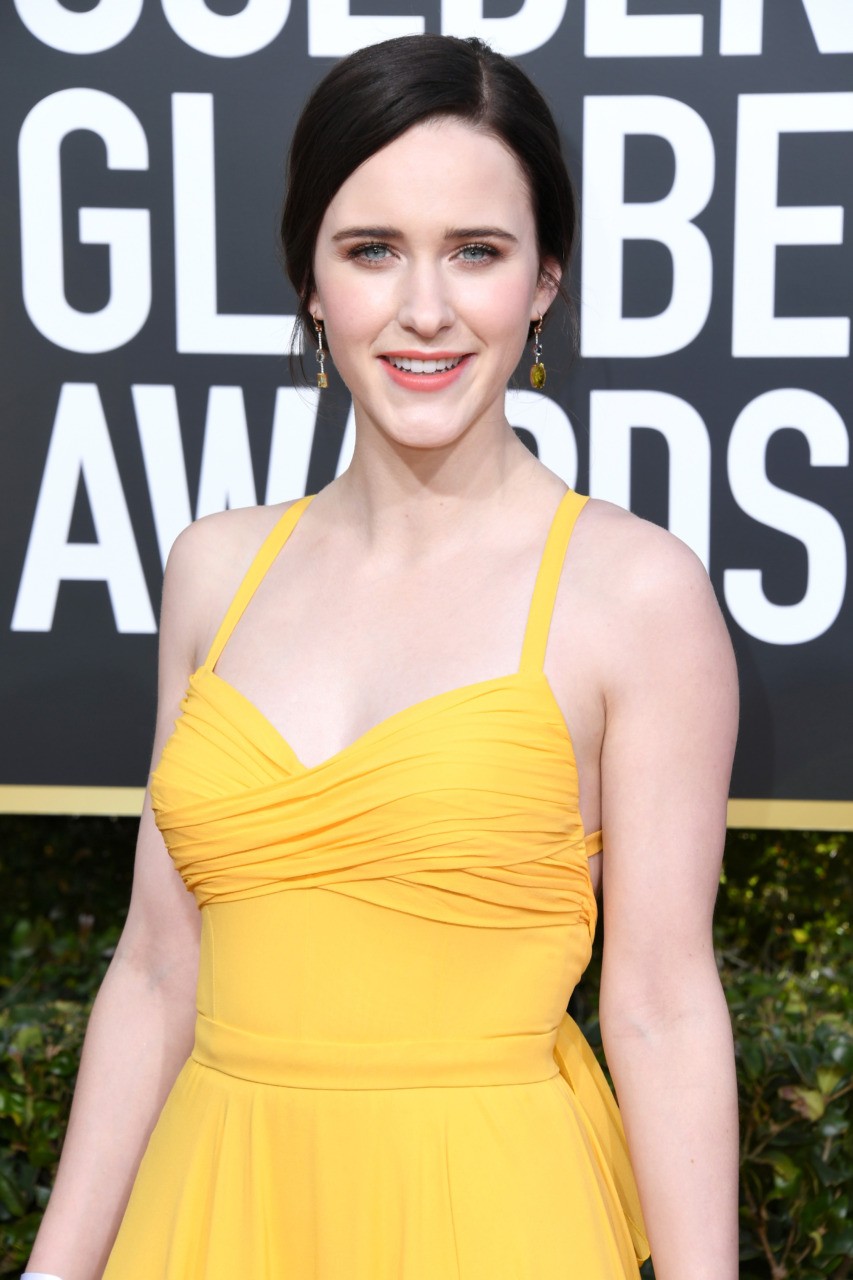 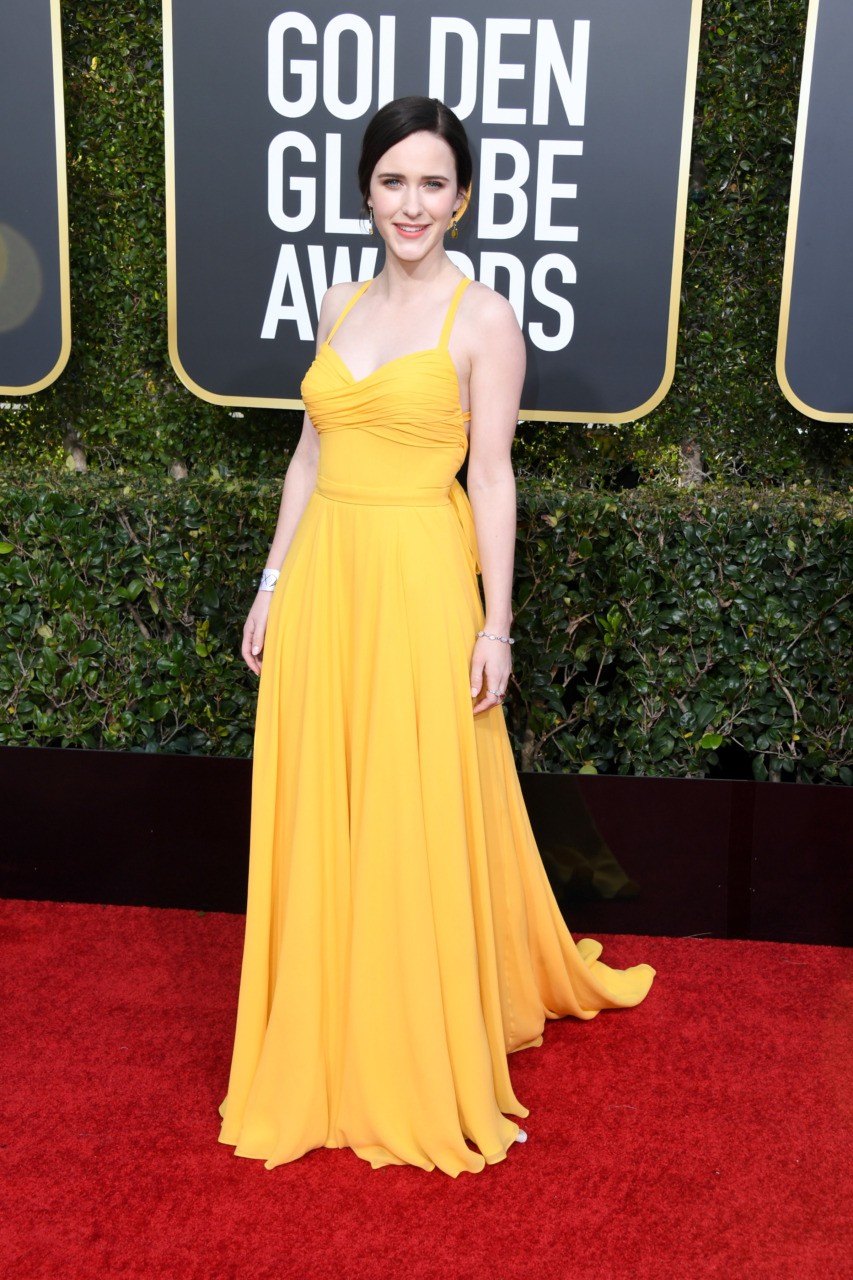 I’m curious to know how much money Kate Mara had to be paid by Miuccia Prada to hawk out this peach Miu Miu tablecloth and giant white clutch at the Golden Globes. Whatever the amount, this was not worth it, Kate.

And when you get home, make sure to burn this dress in the fireplace. 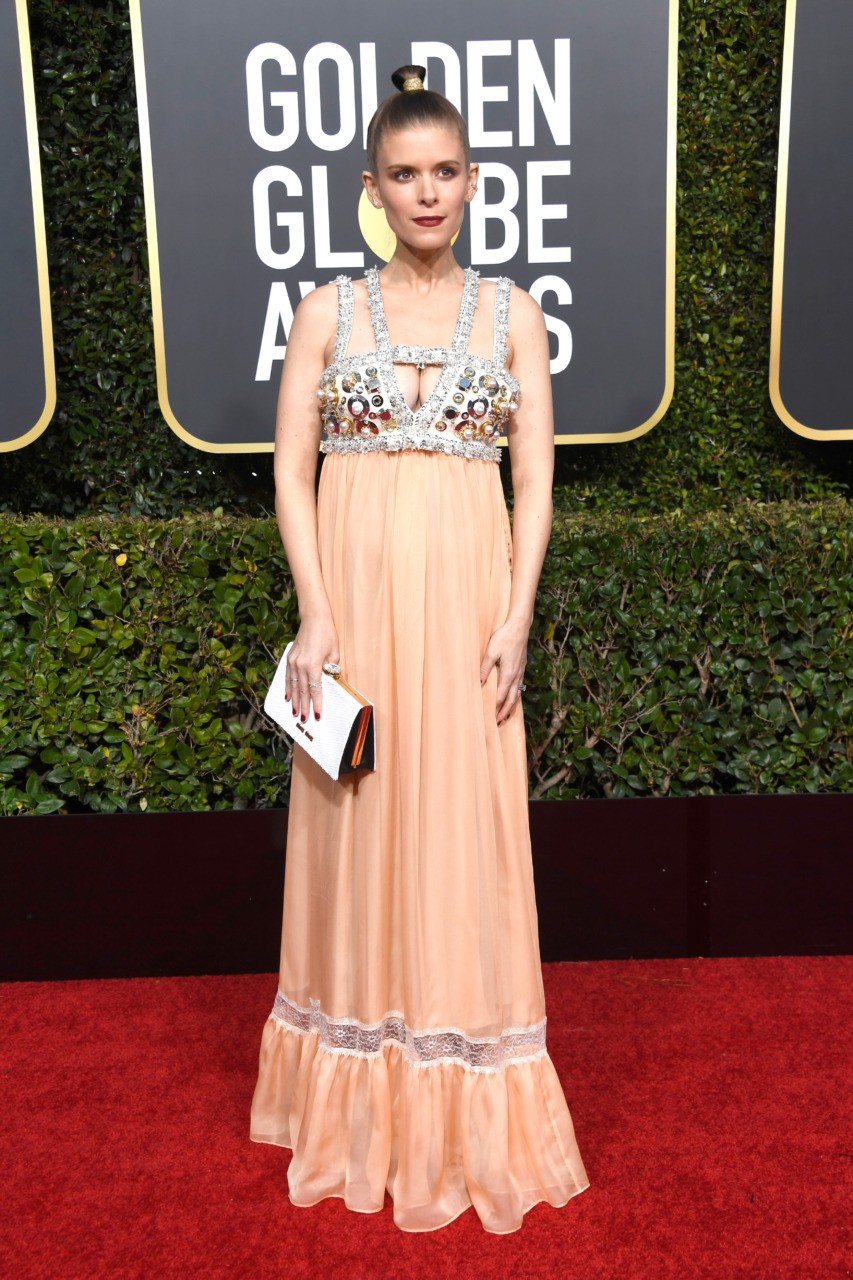 Is there any red carpet that actress Lupita Nyong’o does not stun on? The Kenyan native arrived in this strapless blue and silver Calvin Klein by Appointment gown that beamed off her chocolate complexion as the beaded tassels moved spectacularly when she walked throughout the event.

Throw on some dangling earrings, a bracelet and you’re set to look like a million bucks in this piece. No necklace necessary. 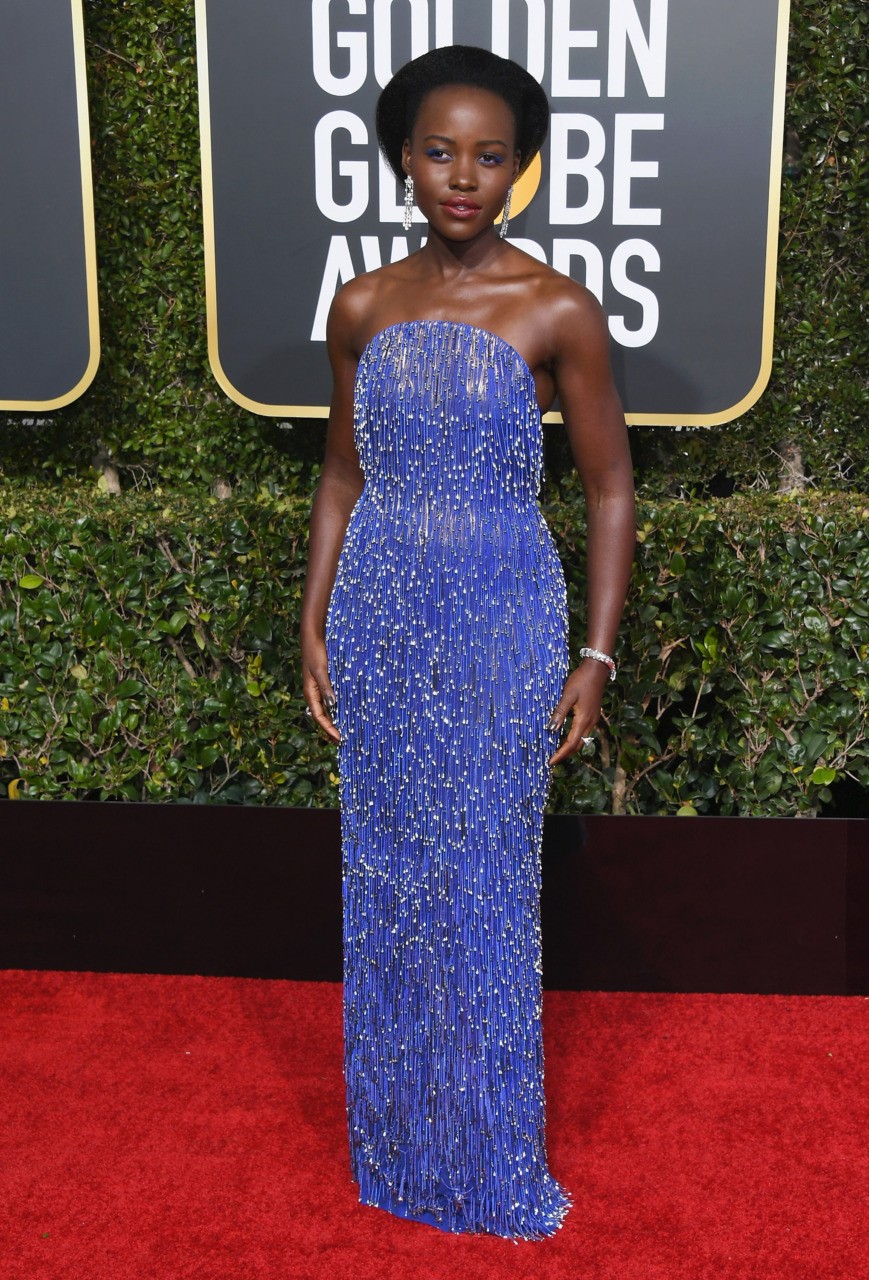 Actress Lucy Liu’s Galia Lahav gown reminds me of the wedding dress Angelina Jolie wore to marry Brad Pitt. Jolie had her children’s drawings scattered across the train of her gown and that’s exactly what Liu appears to have done here.

As if the craftiness of this gown was not horrendous enough, Liu added a mosquito net over the whole look. Is this a thing? Is mosquito netting fashion now? I think Isaac Mizrachi would say, “No, darling.” 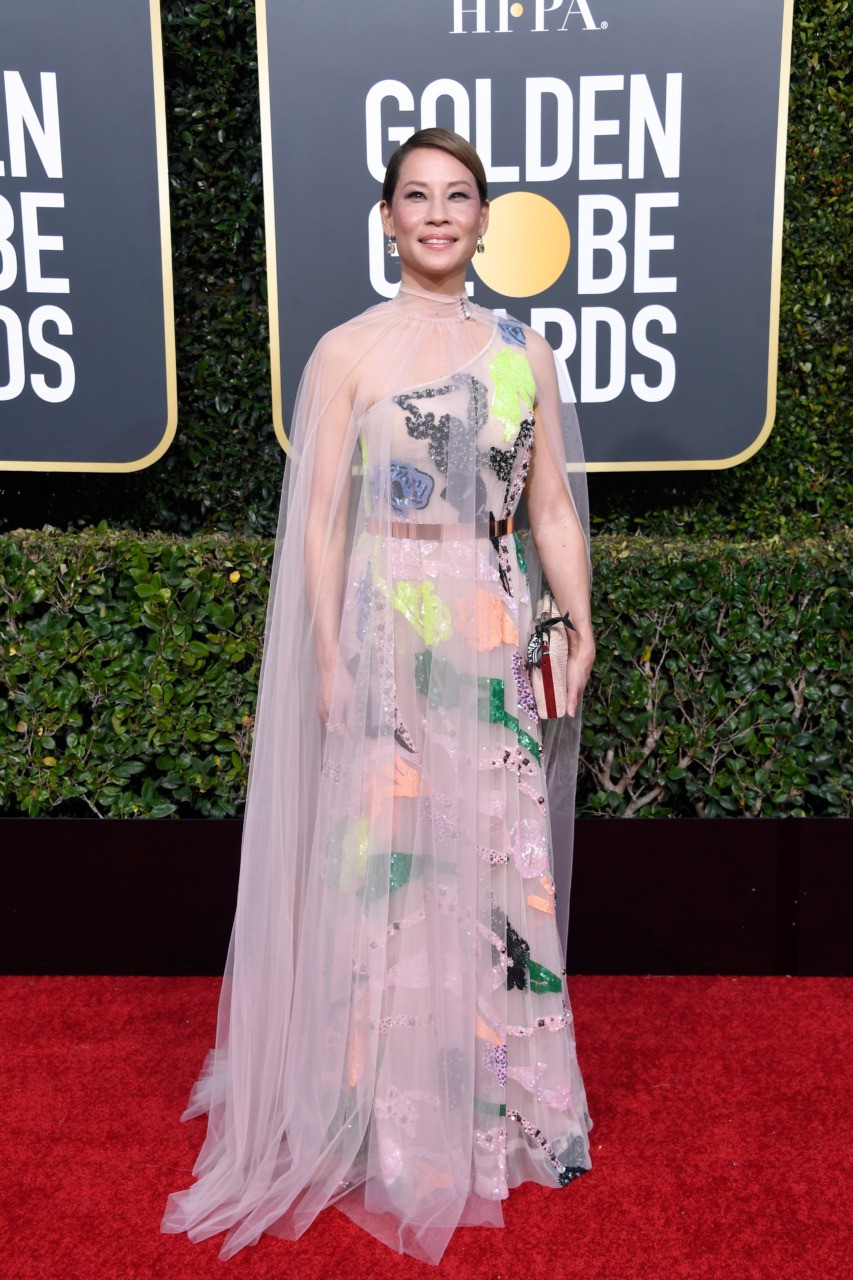 The Americans‘ Keri Russell is the most underrated, timeless sex kitten and at the Golden Globes, she proved once again that 42 is the new 32.

In an all-silver, plunging neckline Monique Lhuillier gown and a black octagon clutch, Russell was as fierce as she is when playing a Russian spy on television. Also, Russell’s figure is such a throwback to the slinky and skinny, Kate Moss era of beauty from the 1990s.

I can’t wait to see this revived after too many years of giant Kardashian-esque rear-ends. 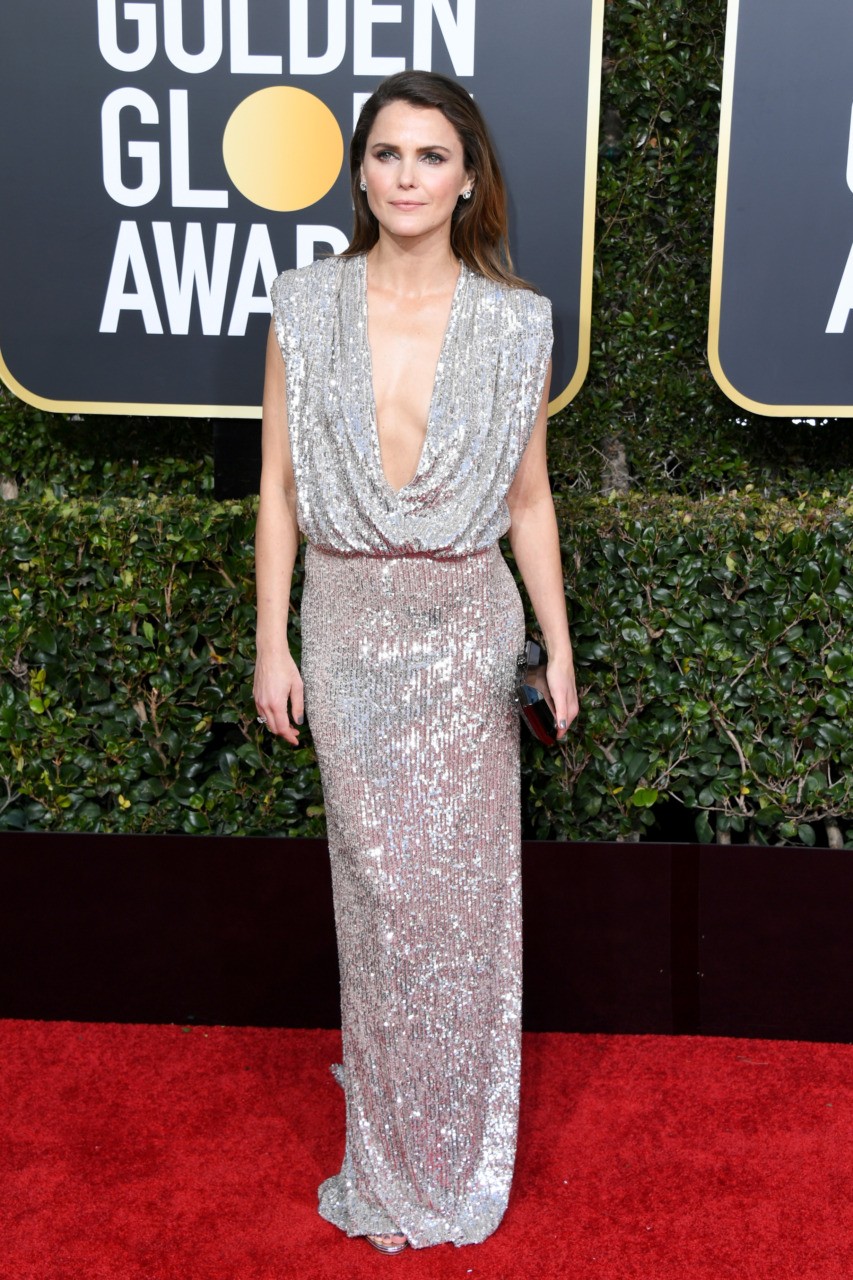 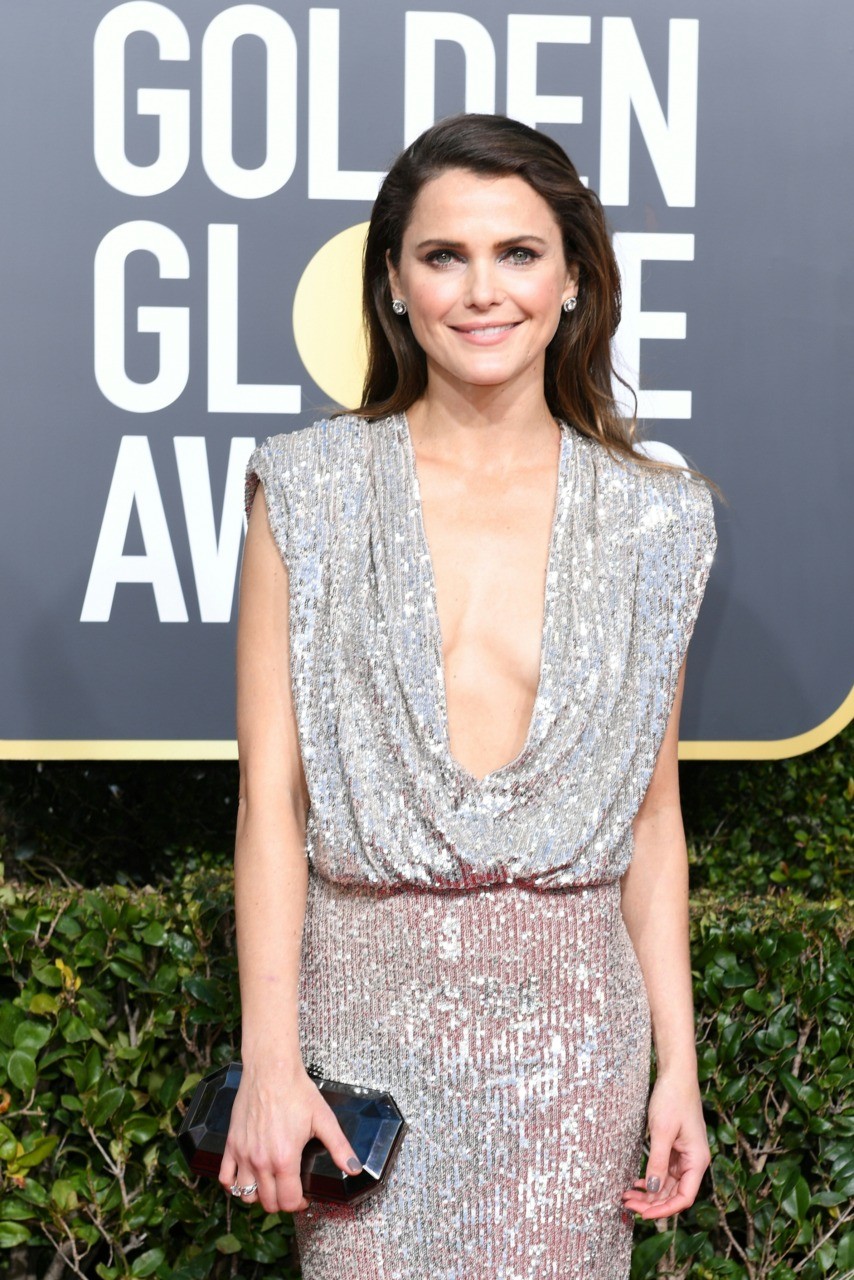 Actress Julianne Moore (Why does she always give off such a snob vibe?) looks as though she cut up her husband’s white tuxedo and turned it into a halter top when she arrived in this ill-fitting and, quite honestly, fugly Givenchy evening gown.

First off, how many bracelets do we need? Second, do we need dangling earrings with a halter top? Third, can we stop the gown interpretations of tuxedos? And lastly, why is there a fishing net wrapped around Julianne’s waist?

When Kate Mara throws her dress in the fireplace, FedEx your gown to her, Julianne, so she can discard of yours as well. 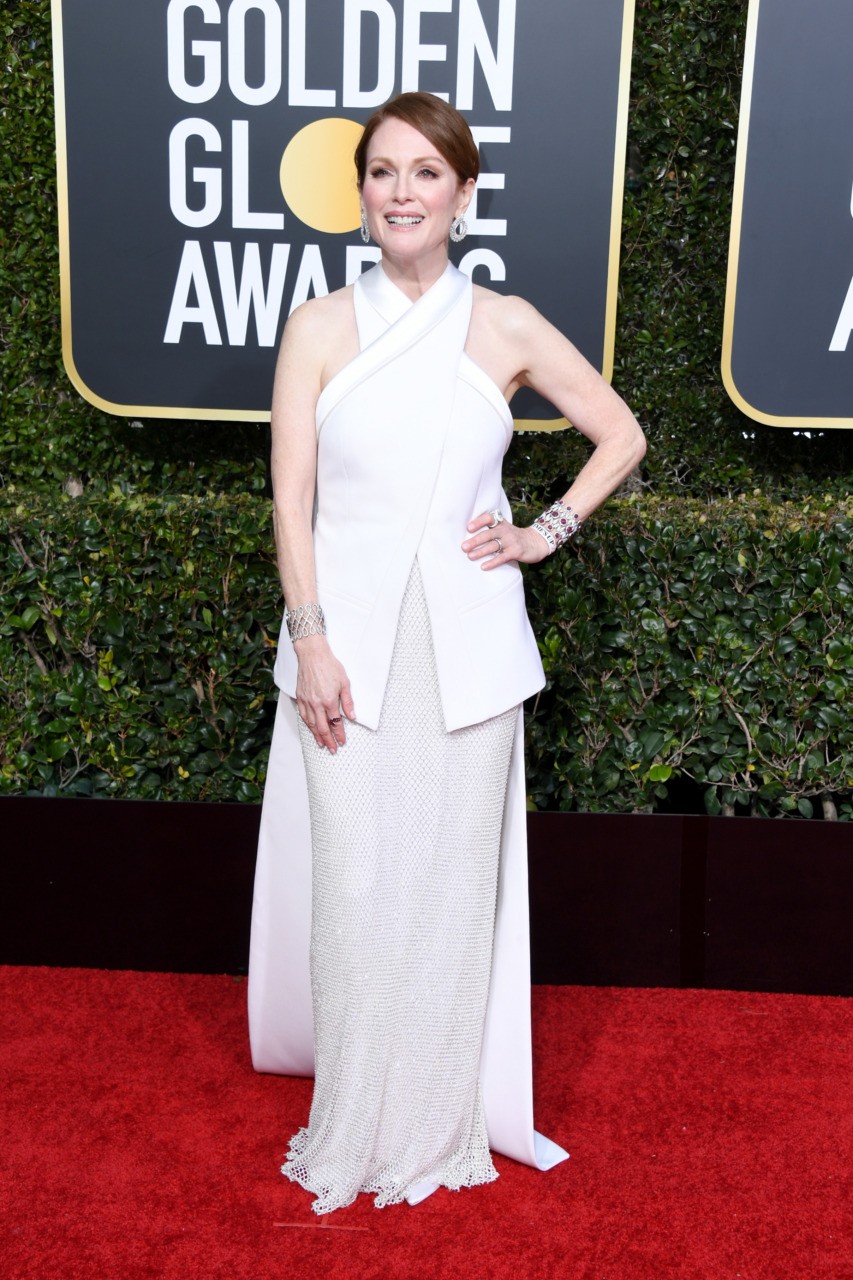 It may not even be possible to be on the worst dressed list when you are Charlize Theron because, truthfully, this South African-born starlet is almost near physical perfection.

This Christian Dior black and white gown features a bow around the neck, a slit down the center of the bodice, and is backless. Sure, in all black this dress would have been wonderful, but the contrast of the white skirt with the black top is quintessential Hollywood.

Not many actresses wear black and white gowns anymore — I imagine the white scares them — but Charlize is willing to go there. Thank goodness she is! 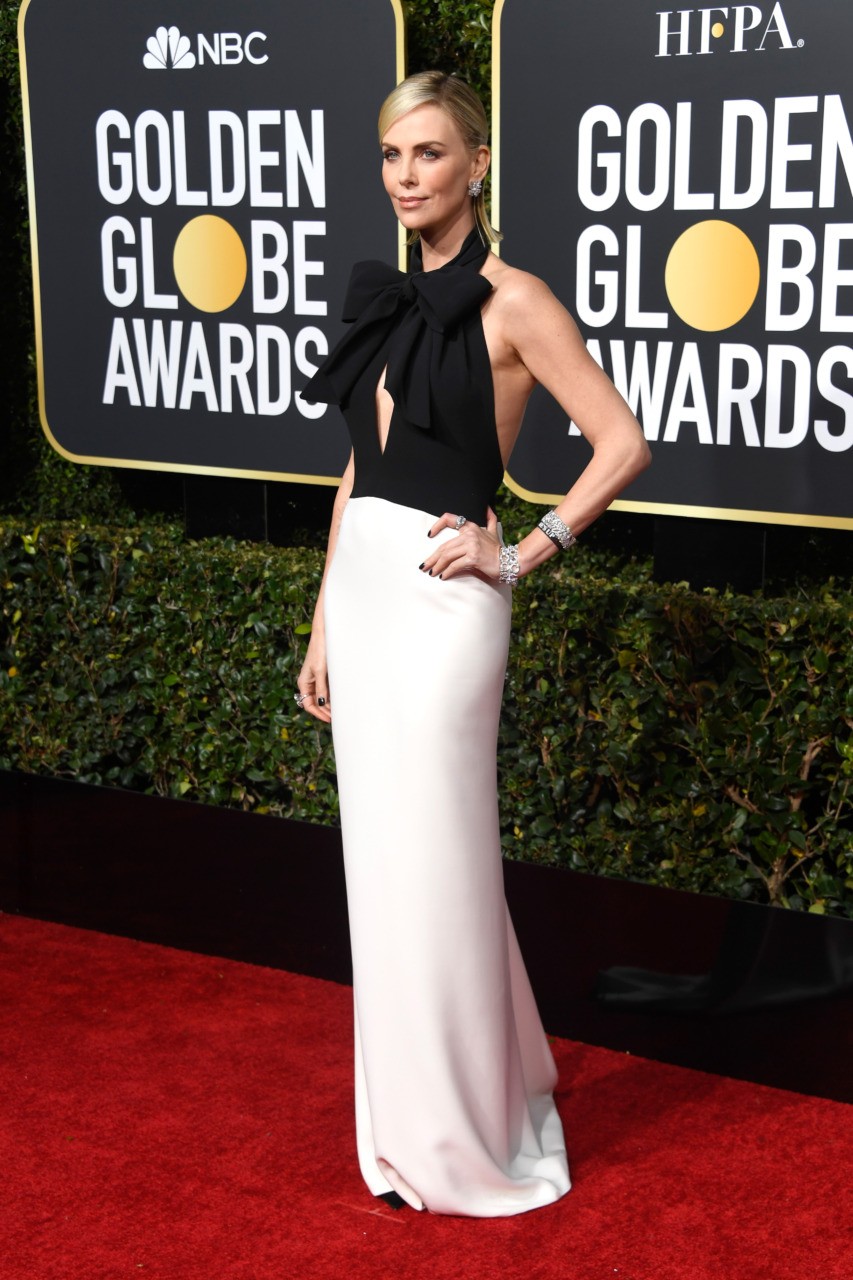 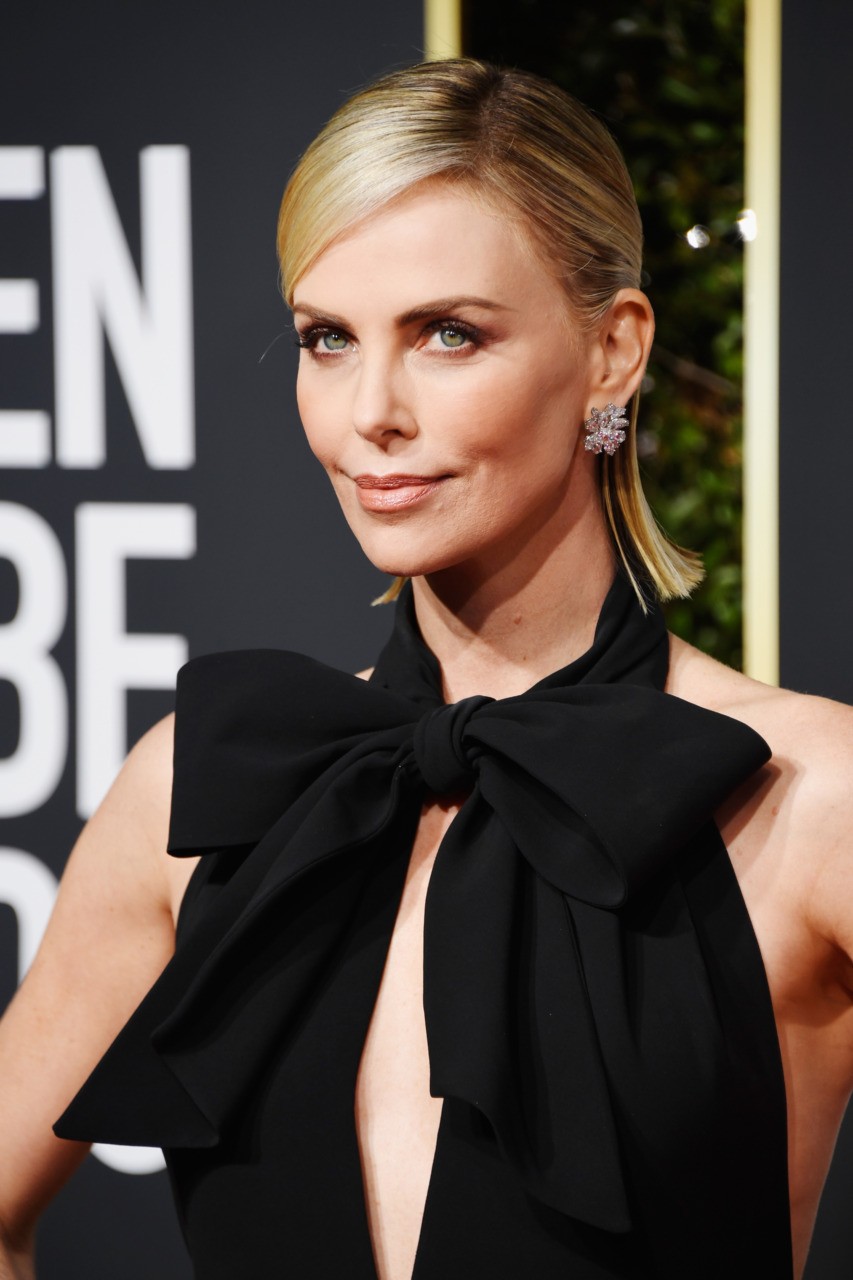 Escape at Dannemora actress Patricia Arquette was born to wear Vivienne Westwood’s corseted, busty off-the-shoulder gowns. And she’s worn many of them to red carpets, but why fix something that’s not broken?

This year, Arquette kept it classic in this Bette Davis-style black Westwood number with that famous neckline, breasts pushed high, and hair pulled loosely back into a swift updo.

Old Hollywood stars would have killed in a dress like this. Fortunately, Arquette does too. 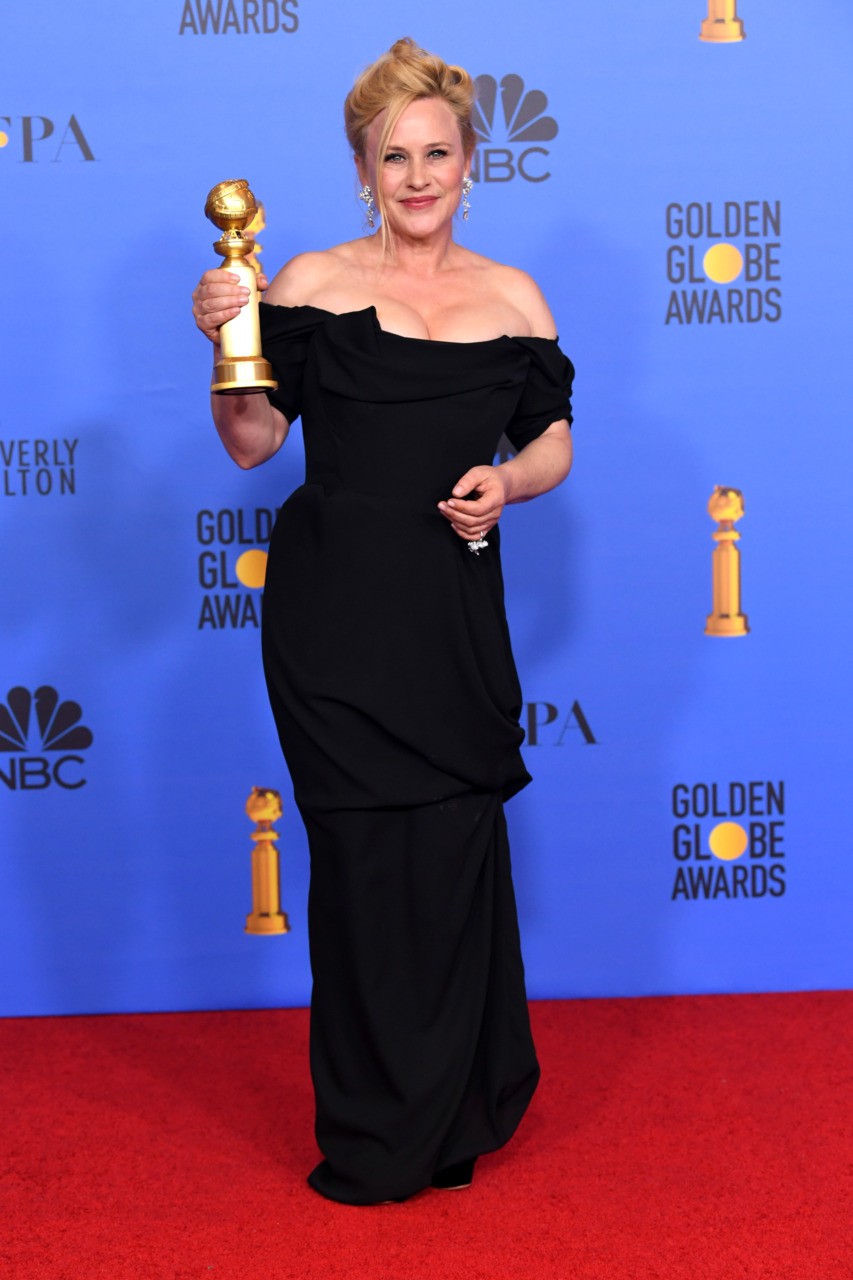