Actress and left-wing activist Rosanna Arquette has pushed a conspiracy theory about the coronavirus, alleging that Israel has been working on a vaccine for a year in partnership with a company that has ties to Jared Kushner’s family.

Rosanna Arquette tweeted out the conspiracy theory on Tuesday but quickly deleted the tweet amid backlash accusing her of antisemitism and blaming Jews for the global pandemic.

“I’m still confused, so Israel has been working on a corona virus vaccine for a year already ? (so they knew),” the actress reportedly wrote in the deleted tweet, according to screen shots circulating online. “Vaccines take a long time to know if they are safe and KUSHNER OSCAR is the major investor in the new vaccine that is supposedly coming here. lives at risk for profit.” 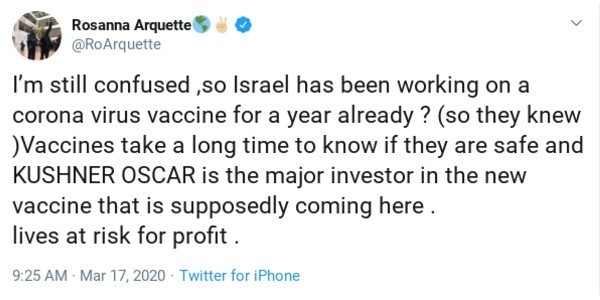 Arquette has acknowledged that she posted the tweet but is denying accusations that she is anti-Semitic. She also appears to be distancing herself from her claim that Israel secretly knew about COVID-19, saying the she confused different strains of the coronavirus.

First of all I’m Not anti Semitic I was born to a Jewish mother. Israel is ahead of us in the vaccine for a year that’s what I said I give to Jewish family services who do so much for ALL people And the Holocaust museum honored my husband because he helps survivors ✌🏼

Never said that said they were working on a vaccine for a year. But apparently it’s a different strain.

I embrace all religions and the freedom to worship the way you feel is right for you.

The actress appeared to be referring in part to a recent article published by the anti-Trump site DC Report alleging that the Kushner family is trying to profit off the pandemic through an online testing center locator created by health insurance start-up Oscar Health, which was co-founded by Jared Kushner’s younger brother, Joshua.

Rosanna Arquette and her sister, Patricia, are among Hollywood’s most vocal anti-Trump activists, using their sizable social media followings to regularly trash the Trump administration.