Eleven-time Jeopardy! champion Arthur Chu tweeted to his followers and said that the death of a woman who was shot and killed while attempting to climb into the Capitol building in Washington D.C., was one of the “good things” about Wednesday’s riots.

Chu claimed that Ashli Babbitt, a 14-year veteran of the Air Force, is a “Trump Nazi” and, therefore, and said “you should feel less bad than you do about putting down a rabid animal.”

Babbitt was shot and killed by a member of the Capitol Police force when a group of Trump supporters flooded into the Capitol building on Wednesday.

Chu celebrated Babbitt’s death and jumped on Twitter to explain how Trump supporters like Babbitt are “Nazis” who don’t deserve to be considered human beings. 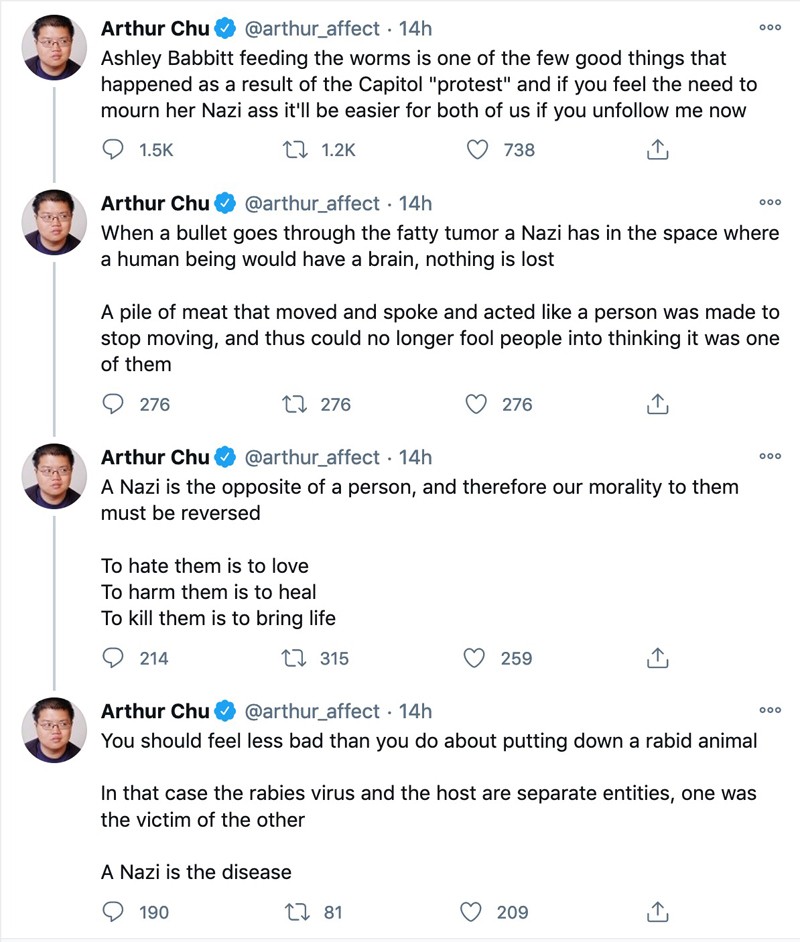 “Ashley [sic] Babbitt feeding the worms is one of the few good things that happened as a result of the Capitol ‘protest’ and if you feel the need to mourn her Nazi a** it’ll be easier for both of us if you unfollow me now,” the 11-time former “Jeopardy!” champion wrote.

“When a bullet goes through the fatty tumor a Nazi has in the space where a human being would have a brain, nothing is lost,” continued Chu, who is a voiceover artist, actor, and has more than 40,000 Twitter followers. “A pile of meat that moved and spoke and acted like a person was made to stop moving, and thus could no longer fool people into thinking it was one of them.”

“A Nazi is the opposite of a person…to kill them is to bring life,” he said. “You should feel less bad than you do about putting down a rabid animal.”

Chu’s tweets garnered a wave of criticism and backlash over his bloodthirstiness. But by Friday morning all the tweets disappeared. It is not known why Chu deleted his thread of “Nazi” tweets.

Chu has long been a controversial figure, even among fans of Jeopardy!, in 2014, after becoming an 11-time winner, Chu was criticized for his polarizing play, and was even called “dishonorable” for his behavior on the set of the show. And since then he has continued to attack people on social media, call names, and wish for harm to come to his opponents. A documentary about Chu’s combative personality was made in 2017.
Follow Warner Todd Huston on Facebook at: facebook.com/Warner.Todd.Huston.