Celebrity Turkish chef Nusret Gökçe (also known as “Salt Bae”) was slammed and mocked on Wednesday after details emerged of the astronomical prices charged in his new London restaurant.

Gökçe recently opened his 15th outlet in upmarket Knightsbridge, the same area of the capital that hosts Harrods main store, however it was the prices being asked rather than the location that drew most comment.

A bill from Nusr-Et Steakhouse shows one diner parted with a whopping £1,812.40 in total.

The priciest item is a £630 “giant tomahawk” steak, which is covered with gold leaf however even smaller items come with a hefty price tag.

It’s cheaper to fly and have food at Salt Bae’s Turkish restaurant than to go to the London one. £9 for coke. £630 for Tomahawk steak. No thank you. pic.twitter.com/PufkwKzthM

think there’s a line where high restaurant prices stop being rip offs and become a kind of performance art, and i think salt bae’s new london restaurant has soared past it pic.twitter.com/USgfFWLrB2

The only item on the menu without cost is Turkish tea, which is apparently served for free while the whopping bill included a 15 percent service charge of £236.40.

Despite the prices, the Knightsbridge branch appears to be fully booked for weeks to come as Time Out reports it’s “basically impossible to get a seat.”

This is not the first time Gökçe has come to the public’s attention. 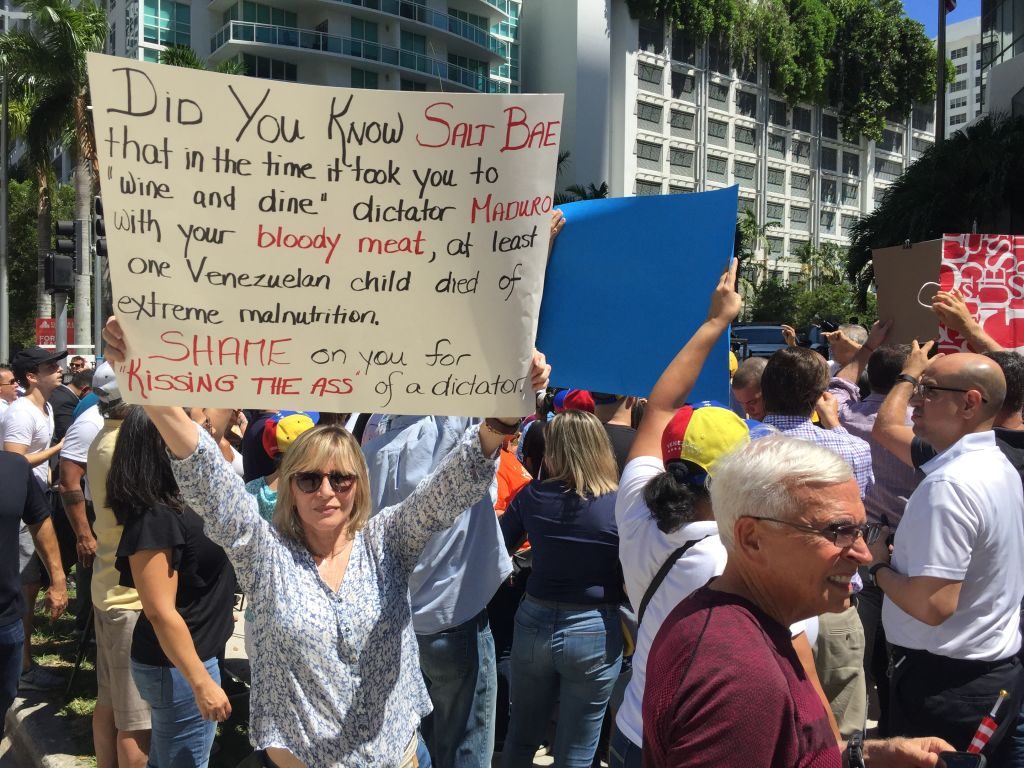 Venezuelans protest in front of the Nusr-Et Steakhouse restaurant in Brickell, near Downtown Miami, on September 19, 2018. Turkish chef Nusret Gökçe, known as “Salt Bae”, made waves in the news after he hugged and lavished Venezuelan president Nicolas Maduro in one of his restaurants in Istanbul. (LEILA MACOR/AFP via Getty Images)

As Breitbart News reported, in 2018 he hosted socialist dictator Nicolás Maduro for a lavish feast in Istanbul.

The videos of a portly Maduro enjoying such a luxurious meal triggered outrage among Venezuelans and pro-democracy activists worldwide, as Maduro’s socialist policies have brought what was once the wealthiest country in Latin America to the brink of famine.