Grammy-winning recording artist and billionaire fashion mogul Kanye West took to social media recently to declare that the news outlets Page Six and TMZ, and NBC’s Saturday Night Live are “Godless,” adding, “our freedom of speech is being challenged.”

“Someone always telling you you’re crazy can drive someone crazy,” West wrote in a recent Instagram post. “That’s the gaslighting. That’s the harassment. The liberals have tried to discredit me for 20 years.”

“Page 6, TMZ, and SNL are a gang,” the rapper added. “That gang has tried to bully, harass, control, discredit, minimize, and patronize me for years. They are Godless.”

“God got me and God got our family,” he said. “Jesus has already one[sic] the the victory. And for everyone praying for me and my family. Faith without works is dead. Do something positive while you still can.” 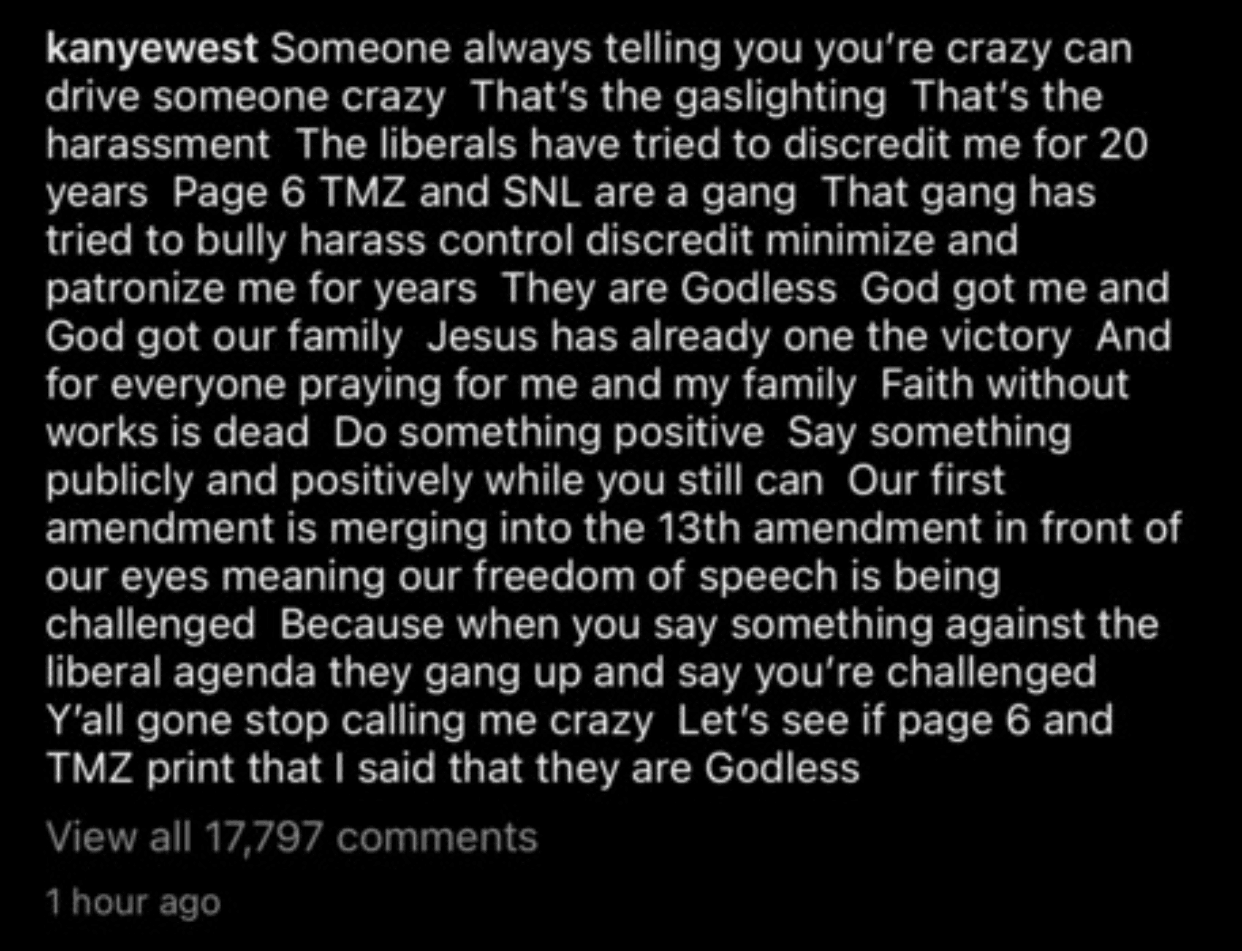 The Grammy-winning rapper went on to say that “Our first amendment is merging into the 13th amendment in front of our eyes, meaning our freedom of speech is being challenged.”

“Because when you say something against the liberal agenda they gang up and say you’re challenged,” West affirmed.

“Y’all gone stop calling me crazy,” he added. “Let’s see if Page 6 and TMZ print that I said that they are Godless.”

In 2018, Kanye West, wearing a Make America Great Again hat, hit the Saturday Night Live, defended President Donald Trump from leftist attacks and said “The blacks weren’t always Democrats. You know it’s like the plan they did, to take the fathers out the home and put them on welfare. Does anybody know about that? That’s a Democratic plan.”

KANYE SNL TALK THAT GOT CUT OFF FREEDOM OF SPEECH SHOULD HAVE EXTENDED pic.twitter.com/IpULoEJxsN

Earlier this week, West mocked “dickhead” Pete Davidson — who is now dating his estranged wife Kim Kardashian — for getting a tattoo of Hillary Clinton.

Late last year, the rapper revealed that Kim Kardashian “didn’t like” him wearing his red Donald Trump-affiliated “MAGA” hat during his failed 2020 presidential bid that “embarrassed” her.